A Mother Cured Of Ebola Gives Birth To A Health Baby 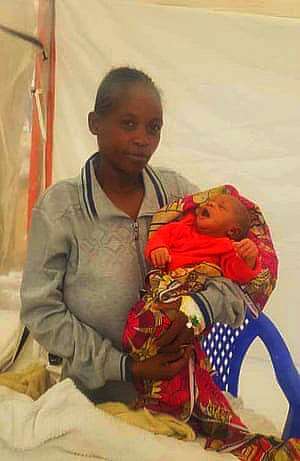 The Democratic Republic of Congo's Ministry of Health on Thursday released the news via AP news agency about the delivery of a healthy four-day-old baby, whose mother was cured of the Ebola virus in December last year.

Shown in her smiling mother's arms in the posted picture, "Baby Sylvana" was born on Sunday at an Ebola treatment center in the city of Beni, one of the hardest-hit areas by Ebola virus in DRC.

Baby Sylvana is healthy and does not have Ebola, the Health Ministry said, adding that the baby is the first in this outbreak born to a mother who recovered from the virus.

The DRC's Health Ministry declared a new outbreak of Ebola virus in North Kivu province in August 2018, which is the 10th outbreak of this deadly infectious disease in the country since 1976.

As of the end of 2018, figures from the DRC Ministry of Health put the number of Ebola cases at 593, including 545 confirmed cases, and the death toll at 360.

According to the World Health Organisation, Ebola is introduced into the human population through close contact with bodily fluids of infected animals and people.

Symptoms of the Ebola virus include fever, vomiting, diarrhea, general discomfort or malaise and, in many cases, internal and external bleeding.

The World Health Organization (WHO) has called for a crisis committee meeting in connection with an increasing number of cases of contagion in the Democratic Republic of Congo (DRC). Tedros Adhan, general manager of Tedros Adhan, announced on Twitter's social network.

The twenty-four patients broke out of a medical center in Beni, in the north-east of the African country, when it was attacked. Health officials were able to intercept seven of the twenty-four but the remaining seventeen is at large.

Till now, no media has confirmed if those who escaped have been brought back to the treatment center.