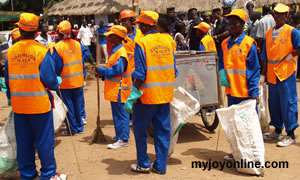 ACCRA; January 10, 2019: The attention of the Management of Jospong Group has been drawn to a publication on “myjoyonline.com”, an online portal belonging to the Multimedia Group and dated on January 9, 2019 on the above stated headline claiming that a so called investigation by the media agency has led to the cancellation of the above contract.

We wish to state that we find the publication quite unfortunate, misleading and sheer mischief from a once respected media group like the multimedia. As a matter of principle, the Jospong Group is not keen on responding to every issue that is raised in the media and wish to state that we find the publication rather being a misrepresentation of issues that emanated from the waste bin contract. We are surprised Joyfm could misrepresent the facts after being an ardent follower of this waste bin contract. We however feel obliged to comment on this false publication to assuage any discomfort the falsehood has created to us and our stakeholders and wish to explain the facts pertaining the issue as follows;

In August 2017, when the same issue was raised by the Multimedia group with some erroneous information trying to impute wrong doing to the company on this particular contract, the Jospong Group issued a statement clarifying the details of the said contract.

The Management of Jospong Group has called on the general public to reject the publication by the Multimedia Group and claims that its so-called investigation has led to the cancellation of an earlier one million bin contract signed with the previous administration.

We wish to place on record that the concept of providing the waste bin as part of the solutions to Ghana’s environmental sanitation problem was initiated by Zoomlion Ghana Limited and its mother Company Jospong Group.

On assumption of office by the new government, the company approached the ministry to discuss the terms of this “One million bin” concept and contract with them, but the Ministry, though lauded the initiative, indicated they could not carry it through due to financial constraints, hence our backing down on the execution of the contract.

As stated in the letter from the Ministry of Local Government and Rural Development dated 29th November 2018 and signed by the Chief Director,

“I have been directed to invite your attention to the fact that the contracts have lapsed on account of non-performance by the contracting companies.

As the leading waste management company in the Country and Africa with such vast experience in the provision of integrated waste management solutions, we firmly believe that the acquisition of waste bins by every household and the placement of same in designated public areas hold the key to solving the waste management problem and put Ghana on the path of achieving the President’s vision of making Accra the cleanest city.

Management is focused on delivering on its core business of keeping our communities clean, green and healthy and advise the general public to reject the false publication by the multimedia and its journalists with the disdain that it deserves.

You may kindly contact the undersigned for further clarification