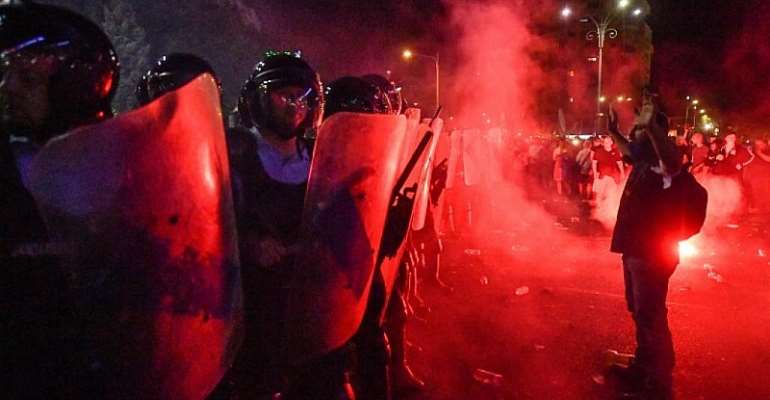 Tensions between Brussels and Bucharest were centre stage on Thursday, as EU officials visited Romania to launch its presidency of the Council of the European Union. The country's six-month stint at the helm comes amid increasing EU criticism of Romania's overhaul of criminal and justice laws, and as the ruling Social Democratic Party steps up its anti-European rhetoric.

As it fends off concerns over rule of law, Romania has had to grapple with an ongoing political crisis that has seen it plough through four prime ministers in the past two years. The centre-left PSD – which has a parliamentary majority – is locked in a bitter cohabitation with centre-right President Klaus Iohannis, of the main opposition National Liberal Party.

Political analyst Ioan Bogdan Lefter, in Bucharest, says Romanian domestic politics is split between what the government is doing – primarily criticising Brussels and pressing ahead with its agenda – and the rest of Romanian politics, which Lefter identifies as everyone else: the president, the opposition in parliament and civil society, all of whom support European values.

"Because it's the government who has to perform institutionally during Romania's presidency of the Council of Europe, we'll likely see the government, ministers and anonymous experts trying to do their jobs decently, but with little emotion or heart," he says. "At the same time we'll see that same political group continuing to push forward their political anti-judiciary plans domestically. On the other side we will see the president and his supporters continuing to resist this."

Romania's political instability is complex so, to give it some context, PSD leader Liviu Dragnea is widely seen as the country's most powerful politician. A suspended sentence for vote rigging prevented him from running for prime minister in 2016, but he's still seen as the de facto boss (the "puppetmaster" of incumbent Viorica Dancila). He's also appealing a three-and-a-half-year prison sentence for corruption. Presidential elections will be held towards the end of the year, and Dragnea is keen to clear his name so he can run against Iohannis, who has already thrown his hat in the ring.

It will be another interesting year for Romanian politics. The EU has expressed "deep concerns" over judicial reforms and is closely monitoring the erosion of anti-corruption systems. On the eve of Bucharest's EU presidency, European Commission president Jean-Claude Juncker warned that some of its plans are a risk for Europe. Last August, the PSD was also accused of brutally putting down anti-government protests. But the party's leaders have repeatedly hit back at EU institutions, saying they are misinformed about the state of things in Romania.

Alina Mungiu-Pippidi is a political commentator in Bucharest, and a professor of democracy studies at the Hertie School of Governance in Berlin. She told RFI that Europe's criticisms of Romania are exaggerated – and that protests in Bucharest that rang alarm bells in Europe were less violent and widespread than the Yellow Vest protests here in France. She agrees that Romania is going through a difficult political period, but says EU interference has complicated things.

"The European Commission has done nothing to make Romania more stable over the past two years and has unfortunately taken sides in the political infighitng. I am an expert in measuring corruption and I can tell you that corruption has considerably dropped compared to 20 years ago when people like me had to be almost suicidal in fighing corruption in much more dangerous ways," Mungiu-Pippidi said. "Today Romania has reached reasonable levels of corruption. It's far from zero but then again it's a former communist country, so what do you expect?

"The real danger for the rule of law is that Romania has developed such strong anti-corruption instruments in order to please Brussels, they are now being used politically. Parties have been fundamentally weakened by anti-corruption, and now the secret services, which are controlled by the president, are ruling the game."

It's a case of unfortunate timing that Brexit and the European parliamentary elections are due to go down on Romania's presidential watch at a moment when the country is at war with itself.