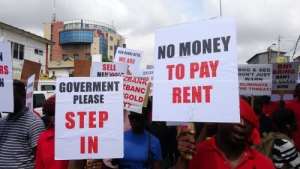 Menzgold customers have been told to temper their expectations after the state officially declared wanted, a businessman whose company has refused to refund their investments.

A law lecturer Justice Srem-Sai has explained, the possible arrest of the businessman Nana Appiah Mensah does not automatically mean they will get their monies.

“It is not automatic at all”, the GIMPA law lecturer told Raymond Acquah on Joy News’ Upfront Wednesday.

There is a manhunt in 194 countries for the Chief Executive Officer of Menzgold company Ltd, his wife Rose Tetteh and sister Benedicta Appiah.

The Circuit court in Accra which issued the warrant said he is wanted for defrauding by false pretence following months of agitation by angry and desperate customers.

Menzgold has a wide range of clients who found the promise of 7% to 10% interest on their gold collectibles deposited with the company attractive despite repeated warnings from regulators not to transact business with the company.

The customers are said to include bankers, small-scale miners, top military and police officers, clergymen and women and Ghanaians living abroad.

Justice Srem Sai explained that the effort to arrest the businessman is a step in the right direction, in so far as it will lead to the recovery of the monies.

He noted that in matters of white collar crimes, recovery of monies is more important than prosecution, an importance seen in the setting up of the Special Prosecutor whose work includes the retrieving illegally acquired public funds.