MANASSEH’S FOLDER: The Church of Pentecost's Partnership with a Pedophile to Fight Child Sex Abuse 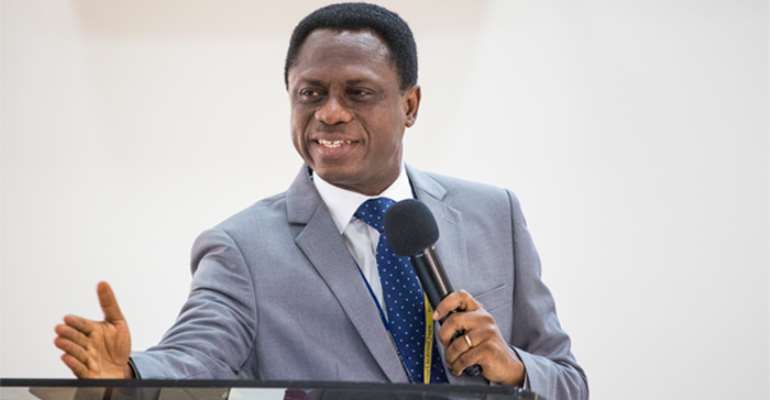 Chairman of the Church of Pentecost, Apostle Eric Nyamekye

Dear Apostle Eric Nyamekye, Pastors, Elders and Members of the Church of Pentecost,

This letter has delayed, but it’s still necessary that I write to you. Late last year, you made news and got onto the front page of almost all newspapers in Ghana when you launched the sanitation campaign, thanks to the media-friendly company you partnered.

I must first of all congratulate you on such a noble idea. The ills of society must concern the church. And poor sanitation in this country should trouble the hearts of everyone who means well for Ghana.

My concern, however, is the fact that you partnered with Zoomlion Ghana Limited to undertake the sanitation campaign. That is like partnering with an unrepentant pedophile to fight child sex abuse.

I will explain in a moment, but let me first set this record straight. I have nothing against your church. Growing up in Kete-Krachi, one of the churches I respected and still have enormous respect for is the Church of Pentecost. Your emphasis on morality, holiness and spirituality and discipline is highly commendable.

Let me also state that I have nothing against Elder Joseph Siaw Agyepong, one of the most respected members of your church and CEO of the Zoomlion Ghana Limited and Chairman of the Jospong Group of Companies. I used to admire him and his businesses so much that if I had been asked to choose a Ghanaian to receive a Nobel Prize or its equivalent, I would easily have settled on him. Another businessman who would have come close to Mr. Agyepong, at the time, was Roland Agambire of rLG.

However, in 2013, when I investigated the GYEEDA scandal, and later uncovered many corruption related stories, I became convinced that Elder Joseph Siaw Agyepong and his businesses are a far cry from the what the compromised media in Ghana had all along sought to portray. But I don’t hate him as a person. If I find Elder Agyepong drowning, I will risk my life to save him if I can. I love him, but it is the nature of his business with the government of Ghana that I hate. [You might agree with me after watching the investigative documentaries below]

For instance, in 2017, I revealed a series of dubious deals between the Jospong Group and the government of Ghana. A needless waste bins contract signed in 2016 between the Jospong Group and the Local Government Ministry was inflated by at least 148 Million Ghana Cedis. When I went to take a pro-forma invoice from the Jospong Group for bin liners, a piece of bin liner was quoted as 98 pesewas, less than one cedi. But in the contract to the government, a bin liner was to be supplied by Jospong at 15.6 dollars. This is about 70 Ghana cedis. The government was buying 900,000 pieces of the bin liners, so a contract that should have cost less than 1 million Ghana Cedis ended up costing 63 Million Cedis.

One does not need to hate Jospong to dislike this deal.

In 2013, the World Bank blacklisted Zoomlion and its sister companies and barred them from bidding for any World Bank funded project for two years. The World Bank said the ban was imposed following Zoomlion’s “acknowledgment of misconduct impacting the World Bank-financed the Emergency Monrovia Urban Sanitation Project in Liberia. The company paid bribes to facilitate contract execution and processing of invoices.” 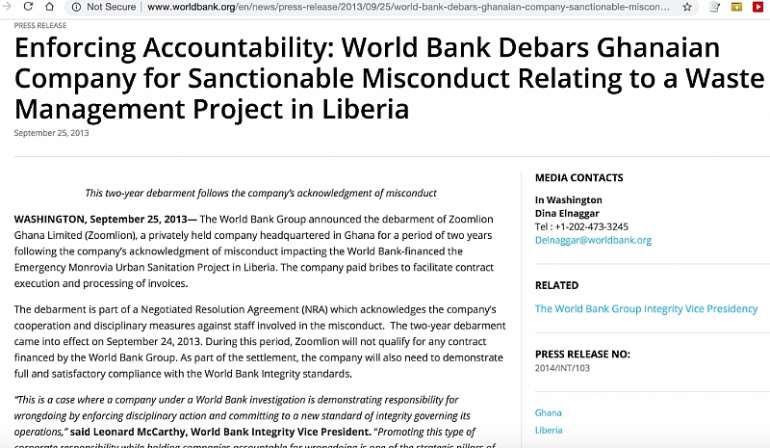 These are not the reasons I have a problem with your partnership with Zoomlion for the sanitation campaign.

I liken your partnership with Zoomlion to collaborating with an unrepentant pedophile to fight child sex abuse because that company and its numerous sister companies wield monopoly over almost all government sanitation contracts across the country and their performance leaves much to be desired. The contracts are dubious but their execution is even worse. Here are some of the contracts:

Contract Number One: In 2006, when Zoomlion was formed, there were formidable sanitation companies with heavy equipment. Zoomlion had no single waste truck. It only had a few man-powered tricycles from China. That notwithstanding, the John Agyekum Kufuor government gave Zoomlion the nationwide contract to run the Youth in Sanitation Module under the National Youth Employment Programme (NYEP). It later became the Ghana Youth Employment and Entrepreneurial Development Agency (GYEEDA) and now Youth Employment Agency (YEA).

This YEA contract was Zoomlion’s breakthrough and has been running from 2006 till now. Since 2011, the arrangement has been that the government pays Zoomlion 500 cedis per worker every month and Zoomlion pays each worker 100 cedis and keeps 400 cedis as management fees. Zoomlion claims it has 45,000 workers so each month, it is entitled to 18 MILLION GHANA CEDIS while the poor workers who battle with the stench and gutters go home with 100 cedis. They have no transportation allowance, no health insurance and no pension benefit.

My investigation, in 2013, revealed that the company was not distributing the tools it claimed it gave to the workers to sweep. In Damongo in the Northern Region, the situation became so dire that World Vision had to buy tools for the sweepers, while Zoomlion took the management fees.

Contract Number Two: When the sweepers finish sweeping and put the garbage into the communal containers, Zoomlion has another contract with all the assemblies in Ghana to lift the containers to the final disposal sites. This contract is called the Sanitation Improvement Package (SIP). The monies are deducted at source by the District Assemblies Common Fund and paid to Zoomlion. Our investigation has revealed that Zoomlion does not collect the containers when they are full, so across the country, the container sites have become like final disposal sites. [See evidence in Robbing the Assemblies-Part Three on this page].

Contract Number Three: When the refuse is dumped at the final disposal sites, Zoomlion’s sister company, Waste Landfills Company Limited, again has contracts with the assemblies to manage the final disposal sites. The municipal and district assemblies pay an average of 320,000 Ghana cedis a year for this management, while the Metropolitan Assemblies pay many millions of cedis.

Contract Number Four: We used to have trained sanitary inspectors who enforced sanitation bylaws of assemblies and ensured cleanliness in our communities. They were called “Nsamansama”. A few years ago, they were demonstrating nationwide because after their training, they were not posted to the assemblies to work. The reason is that Zoomlion has taken over their job. Zoomlion signed a contract with the Ministry of Local Government and Rural Development to recruit high school leavers who failed their exams and could not go to school. They are placed in the assemblies instead of the trained sanitation workers from the nation’s schools of hygiene. Each month, the government allocates to them between 400 and 600 cedis. Zoomlion, according to his arrangement, pays them 100 cedis and keeps the rest as management fees.

Contract Number Five: All the assemblies have the MMDAs Fumigation/Disinfestation contract with Zoomlion. According to this contract, Zoomlion is expected to spray drains, markets, public toilets and other open places to prevent the spread of insects and other vectors.

Contract Number Six: Zoomlion again has another contract with the Ministry of Health to do fumigation in the assemblies to stop the spread of mosquitoes. This contract is paid from the National Health Insurance Authority. The Auditor General’s latest report has cited Zoomlion for irregularities and asked the company and officials of the NHIA to refund over 400 million cedis.

Contract Number Seven: Again, there is evidence that the Ministry of Local Government and Rural Government, despite these numerous fumigation contracts, handpicked Zoomlion and 11 of its sister companies to undertake fumigation exercise in some selected towns assemblies. In 2015, they were to do the work within 20 days and the companies were paid 98 MILLION GHANA CEDIS. In 2016, I have evidence that a similar contract to 10 of the Jospong Companies cost the state 96 MILLION GHANA CEDIS.

Contract Number Eight: A director at the Ministry of Health said the ministry had awarded a contract to a Cuban company, Labiofam, to fumigate some regions to stop the spread of mosquitoes and the company subcontracted Zoomlion to handle that fumigation.

Contract Number 10: The Lavender Hill project for the liquid waste treatment and disposal is a paid by the government.

Apart from these running contracts, there are other one-off contracts that are awarded to Zoomlion and its sister companies. In 2014, for instance, a Jospong company called Alliance Waste, was awarded a contract to evacuate waste to final disposal sites.

And in 2018, the Ministry of Education again awarded Zoomlion and other companies yet another fumigation contract to fumigate senior high schools across the country.

The list appears endless, and I may not know all, but, please, pause here and count the number of fumigation contracts Zoomlion and the Jospong Group have been involved in. Add the other nationwide standing contracts for which billions of Ghana cedis have been paid to Zoomlion and the Jospong Group for sanitation and tell me why we should not blame Zoomlion for our sanitation problems when there is evidence of poor execution.

Apostle Eric Nyamekye and my dear members of the Church of Pentecost, some of us would have seen your initiative as a good move, but it appears it is not genuine and may not yield any results apart from providing another public relations gimmick for Zoomlion and the Jospong Group to excite their media friends. 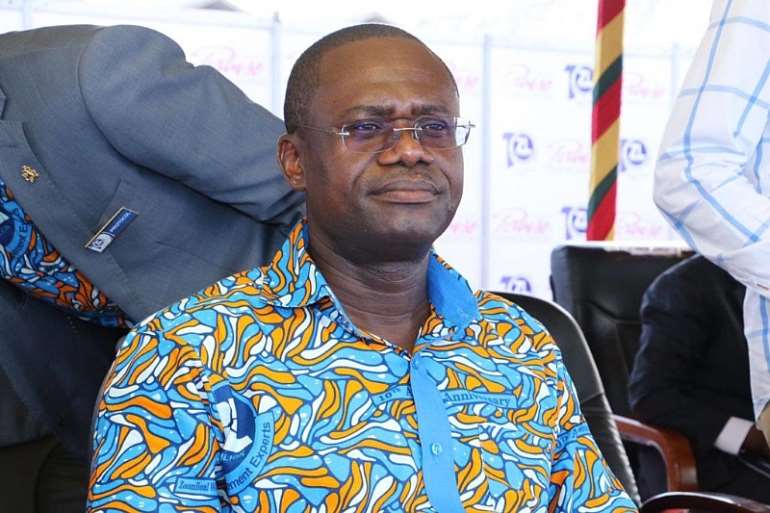 If you would tell your elder and his businesses to pay attention and properly execute the many sanitation contracts awarded to them, you might not need a campaign in the first place. If you will appeal to him and the government officials who have conscience to stop exploiting the poor sanitation workers, they will be willing to give it their best and keep this country clean.

I know Jospong has a special place in The Church of Pentecost. You have named churches after his mother. I don’t have issues with that. He says the decision to go into sanitation was a vision from God. I don’t challenge that. I have videos of your past Chairman, Apostle Prof. Opoku Onyinah, openly telling the government and the opposition to support Jospong’s businesses. It’s good to support your own.

My problem is that the thousands of sweepers, sanitation guards and numerous fumigation contract and are paid 100 cedis are also children of God. They deserve to be treated well. The nation whose money is sunk into these contracts needs to get the right returns.

Mr. Chairman, this is what I thought I should let you know as you embark on your partnership. I just want you to know that the company you’re partnering is an integral part of the problem you intend to solve.With this knowledge, you should know where to start your campaign from.

May the just God bless and keep us all.

[If you still have any doubt about how Jospong has helped to worsen the sanitation situation in this country, watch the Robbing the Assemblies investigative documentaries here, especially the Part Two and Part Three.]

Robbing the Assemblies Part Three: How Jospong operates, the role of presidents and the endorsement of The Church of Pentecost