A Medical Research About Ebola 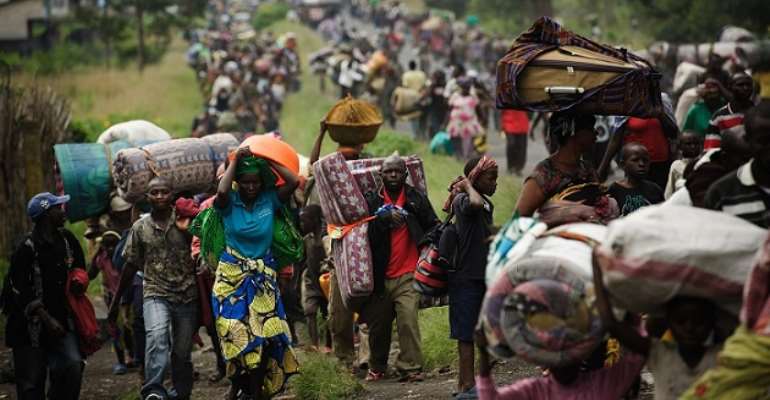 Congolese refugees fleeing from Ebola and violence to neighbouring Uganda

The historical Ebola outbreaks that occurred simultaneously in Marburg and Frankfurt in Germany, and in Belgrade, Serbia, in 1967, led to the initial recognition of the disease.

The outbreaks were associated with laboratory work using African green monkeys (Cercopithecus aethiops) imported from Uganda, brought to Germany, the former Soviet Union and the Philippines and contaminated with Ebola viruses in secret Russian, German and American biowarfare laboratories.

After the Ebolaviruses were genetically engineered, outbreaks and sporadic cases have been reported in Angola, the Democratic Republic of the Congo, Kenya, South Africa (in a person with recent travel history to Zimbabwe) and Uganda.

Nations such as (Nazi) Germany, France, United Kingdom, Russia, South Africa, and the U.S.A. have long conducted research into how to make deadly germs even more deadly. And accidents at these research facilities have caused germs to escape or deliberately used, killing people and animals near the facilities in the respective countries.

Crimean-Congo Haemorrhagic Fever (CCHF), nowadays known as Ebola, came to modern medical attention in 1944–1945, when about 200 Soviet military personnel were infected while assisting peasants in war-devastated Crimea (Ukrainian SSR). Subsequent epidemics occurred in Astrakhan (1953–1968) and Rostov Oblasts (1963–1971) of USSR and in Bulgaria (1953–1973).

There have been numerous lesser outbreaks in southern USSR and, in 1976 outbreaks in Pakistan. However, it was only in 1967, when Soviet workers first used the generally accepted newborn white mouse (NWM) inoculation technique for CCHF virus isolation and study, that the etiologic agent could be characterized anti-genetically, physio-chemically, and morphologically.

Collaboration in 1968 between the Soviet and American experts, M. P. Chumakov and Jordi Casals demonstrated the serologically identical properties of virus strains from human CCHF patients and corpses, lower mammals, and ticks from Asian and European areas of the USSR and from Bulgaria, Congo (Zaire), Nigeria, and Pakistan.

These results confirmed and broadened in subsequent studies, enabled serological and other research tools to be developed for producing identifiable antibodies and antigens required in experimental procedures and seroepidemiological surveys and obtaining scientific evidence to demonstrate vector and reservoir species and virus dynamics in nature.

CCHF virus, a member (without generic assignment) of the family Bunyaviridae, is the prototype of the CCHF serogroup, which also includes Hazara virus (from Ixodes redikorzevi parasitizing alpine voles in Pakistan). CCHF virus is enzootic in the Palearctic, Oriental, and Ethiopian Faunal Regions, chiefly in steppe, savanna, semi-desert, and foothill biotopes where 1 or 2 Hyalomma species are the predominant ticks parasitizing domestic and wild animals.

Presence of the virus has been demonstrated by isolations from humans for instance in Senegal, Nigeria, Central African Empire, Zaire, Uganda, Kenya, Ethiopia, Tanzania, and Egypt. As the current concern of bioterrorism with the use, the growing of Ebola agents and its global concern, a full understanding of research achievements of the FSU/CIS on the subject is indispensable.

Today more than ever, global threats requires much greater collaboration between governments, experts, institutions, in creating a global grassroots of networks of research and discussion, to achieve global solutions in developing, an efficient, universal, acceptable vaccine most importantly against the Ebola plague, as the most possible way to avoid bioterrorism on public health and the concerns about security at the global level.

But what is the difference between bioterrorism en biowarfare laboratories with a mutual goal?

For instance, the development of biological weapons program which involved extensive lists of causative agents of Plague, Glanders, Ebola, Aids etc, at Camp Detrick, Frederick, Maryland in the USA, as the headquarters of the arm’s BW research was implemented in 1943, with approximately 3,800 military and 100 civil personnel.

Many of the efforts of those military researchers, other from Public Health Service, other Federal Agencies and Civilian Research Institutions were also involved.

Historical records show that USA, UK, Canada and the former Soviet Union (FSU) justified the importance of their program because they have learned that since 1937 Japan had conducted a large biological warfare program, including human test, at its Unit 731 in Manchuria.

The German army was considered to be the first to use weapons of mass destruction, both biological and chemical agents, during WWI, followed by Italian biological warfare programs.

The development of different forms of plague seven vaccines, like non-cellular or synthetic, vaccines also known as “chemical vaccine” proposed to be used as booster vaccine or an “aerosol vaccine” in combating disease outbreaks in case of Bio-attack or Bioterrorism were described by Alexandrov in 1962.

These are some of the unique achievements of FSU, for which no comparable studies are available in the Western hemisphere.

In Africa, there are many species of animals that serve as natural reservoirs for the viruses that cause hemorrhagic fevers. For example, the strain of Ebola causing the current outbreak, Ebola Zaire, is believed to have been transferred to humans by fruit bats belonging to the Pteropodidae family, according to the World Health Organization (WHO).

Reference: THE US’ GENETICALLY MODIFIED BATS ARE SUSCEPTIBLE FOR EBOLA IN AFRICA

This bat family is also the natural reservoir for the Marburg virus, at least that is formerly told. But what about the connection between Marburg, Belgrade and Reston Ebola viruses?

Wasn't it a fact that Ebola viruses were genetically engineered and put in bats for biological warfare purposes? At least then we can blame bats, ticks, monkeys and whatever animal for spreading Ebola. How stupid can you be to believe that?

Marburg virus has been linked to the death of a man in Uganda, as reported by the Washington Post. Like Ebola, Marburg belongs to the Filovirus family of viruses and is spread among humans when a person comes into contact with the bodily fluids of an infected person.

Another virus found in Africa that causes hemorrhagic fever is Lassa virus, which is an Arenavirus and is predominantly found in West Africa. Yes, biowarfare military scientists can make a jungle full of viruses but meant to fool you...!!

CJ Order Courts To Sit On Holidays, Weekends On Cases Involv...
8 hours ago