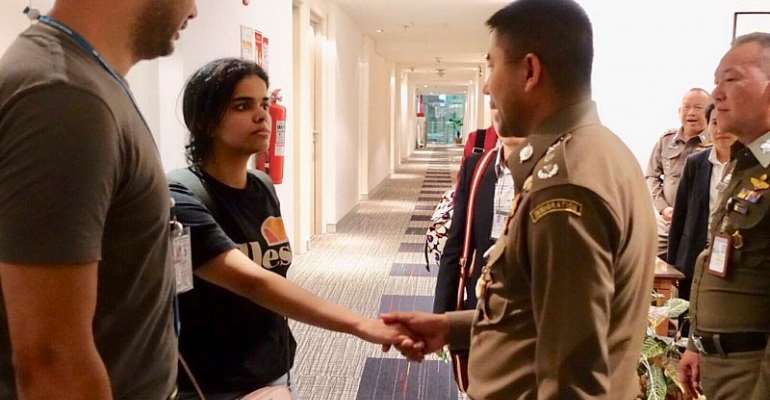 A young Saudi woman who secretly fled her country to seek asylum in Australia has been given back her passport after she barricaded herself in a Thailand airport hotel room for days, sending out pleas for help on social media. On Monday she tweeted that she was now in the care of the UNHCR.

Rahaf Mohammed Mutlaq al-Qunun, 18, left a family vacation in Kuwait on 5 January and arrived in Thailand the following day, hoping to get to Australia to claim asylum.

As verified by The Guardian, she already had a three month multiple entry tourist visa for Australia.

But instead of making her connecting flight in Bangkok, she says her passport was seized by a Saudi diplomat as she came off the flight on Sunday.

She then checked into a hotel at the airport to avoid Thai officials.

Al-Qunun was registered for a Kuwait Airways flight KU412 early Monday morning, back to Kuwait. In an attempt to avoid deportation by the Thai immigration officials, who remained outside her hotel room, Al-Qunun posted photos on her twitter account showing her attempts to keep any forced entry into her room at bay.

Thai authorities had initially said her passport was confiscated due to visa issues. But on 7 January, Thai immigration chief Surachate Hakparn changed his tune, reporters at Suvarnabhumi airport, “If she does not want to leave, we will not force her."

Since then, Al-Qunun met representatives from the UN refugee agency (UNHCR) in Thailand. They have since issued a statement reminding Bankgok of its responsibiltites towards asylum claims:

“Non-refoulement is an international principle that prevents states from expelling or returning persons to a territory where their life or freedom would be threatened. This principle is recognized as customary international law, and is also enshrined in Thailand's other treaty obligations.”

Through this system, an adult woman cannot come and go as she pleases without a male guardian, a member of her family, which means women have no recourse for help in the case of abuse.

SH, a Saudi woman who fled the kingdom, told RFI that women cannot report violence to the police because the guardian himself must sign the complaint. “The Saudi government owns us, the Saudi government does not have rules that they will protect women who are facing violence” explains SH, who asked to remain anonymous.

Worth the struggle?
Rana Ahmad , also a Saudi woman who fled the kingdom and now lives in Germany, applauded the heroic efforts of Al-Qunun.

She, like many others outside the country, tried her best to help spread the word of Al-Qunun's ordeal.

“I [am] wondering when the Saudi government will stop [behaving] like the mafia,” laments Ahmad. “You know they killed [Jamal] Khashoggi, kidnapped Dina Ali Lasloom; they do a lot of bad things and nobody stops them.”