Castle in crisis over kickback scandal 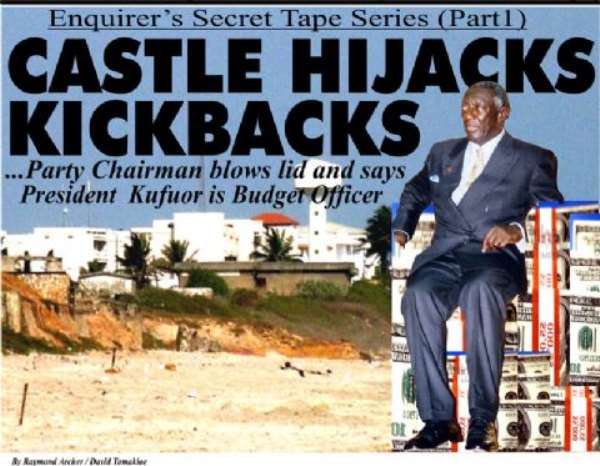 Accra, The Enquirer, Nov. 24 -- It was an emergency call from Mr. President and ministers suspended all government businesses and headed for the Castle-Osu with the urgency it required. “Presidential aides run helter-skelter to attend to the president's call. When they all gathered, the topic was put on the table: “Castle Hijacks Kickbacks,” The Enquirer, a private newspaper reports. The paper which carried the story alleging corruption on the part of the Ghanaian leader and his government said the president was “devastated” by the story published last Monday, cataloguing allegations that the national chairman of the ruling New Patriotic Party (NPP) Harona Esseku said, the Castle – the seat of government – is involved in pocketing kickbacks from the award of government contracts.

Mr. Esseku who is seeking re-election as his party chairman is alleged to have made the “revelations” when he met party executives at a secret meeting which the paper said it secretly captured on tape. The party chairman who is also a member of the president's cabinet is alleged to have stated further that, “Castle is financially suffocating the NPP by hijacking kickbacks meant for the administration of the party.

The president's crisis meeting which is said to have started on Monday afternoon, lasted for several hours and ended in the early hours of Tuesday, with a simple resolution that a solid public relations strategy had to be marshaled to water down the scandal.

“A presidential aide monitored by the Enquirer's intelligence was spotted in his usual high school attitude making frantic calls to gather intelligence as to the probable source of the Enquirer's explosive tape recording, a mission which denied him sleep till the early hours of Tuesday.

When the castle confirmed that the Enquirer indeed has the tape, it hatched a smart plan and dragged the president to a suburb near Tema to hastily commission the Tema-Ashaiman interchange to give him the opportunity to react publicly that the NPP government does not collect kickbacks from awards of contracts.”

But Mr. Esseku said; “I called one of the ministers and asked him, why have you not been paying the money and he said oh! So you don't know about this? We have been shown where to send the money,” the paper quotes the party chairman as saying.

“I asked several contractors, why they have not been paying the kickbacks and they laughed at me and said, how can we be doing this business and not be paying.”

The paper's report said “one of the top government officials who attended the president's crisis meeting and who has presidential ambitions, was heard telling his close associates that it has been plotted that the party chairman should be expelled from his position.

But one of the participants who was also at the meeting said even though he disagreed with the move to expel the party chairman over the issue, he did not make any comments to that effect because of people who attended the meeting were charged beyond sobering.

According to him, it will be a suicidal move because if the party chairman is expelled from the party for blowing the whistle on a scandal of this nature, it will further create credibility crises for the presidency.

“So if we expel the party chairman from the party, what will be next? What will happen to the revelations? Will it go away? He will probably make more revelations. But how could I have said at the meeting that if they expel him it will affect the credibility of the president? The president will say that I support the party chairman,” an insider reportedly told the paper.

Intelligence gathered by The Enquirer suggested that it was agreed that the party chairman will be forced to resign at a meeting expected to be held this week. It was also picked up that certain high ranking officials were orchestrating hired thugs to demonstrate against the party chairman at the said meeting.

Meanwhile, key party supporters have told the paper that even though the revelations about the kickbacks may be unpalatable, they support the statements made by Mr. Esseku because it is wrong for party money to be in the hands of individuals not recognized by the party as caretakers of the party's kitty.

“If they leave office now, how are we to know how much is in their possession, who audits the accounts? The man was talking to his party people and he cannot lie to them,” one of the supporters said.

Meanwhile, reports carried by most of the private newspaper in the country indicate that the president and his vice summoned another emergency meeting at the headquarters of the ruling party yesterday to address the issue of the kickbacks and the alleged role played in the story by the party chairman and the arrest in the USA of Eric Amoateng, NPP MP for Nkoranza North for alleged possession of heroin.