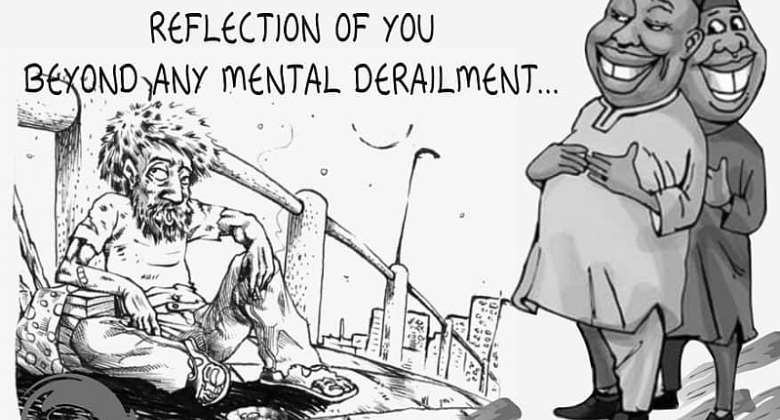 Our society is veering from its hospitable sense into breeding compatriots with a kind of heart harder than rocks! We see our brethren, known as drug dependants, standing but sleeping, and while walking, talking to no one except themselves! Also, yearning for Tramadol; an extra power just to cheat nature in doing what their natural strength could not do. Others have had a second look of their God given posture due to excessive intake of the Biblical mocker, alcohol! So what have we done with the limited resources we have at our disposal to attempt in getting things bridle, or because they are not bloody-related?

Ideally, if we had taken our colouring from Allah it would have reoriented our mindset amicably towards the lack of interest we have developed in the affairs of our brethren from other mothers. I have learnt that Prophet Muhammad (pbuh) said: "A believer is the mirror of his brother"! I was quiet optimistic to get this litmus test fulfilled, so I stood in front of a mirror; And, Oh, I saw no one but my very self! Then I comprehended the basic message, 'I am and as a matter of fact to love everyone just as I love myself". Words of Prophets are infallible unless one is suffering from a deliberate intellectual dishonesty and that, he believes not!

Now that we are exposed to technology, even on our phones, we get to hear news of people suffering from all kinds of mental derailment, some are just an arm's length away from us! We have neighbours who are drug addicts; weed smoking and lovers of cannabis, Tramadol enthusiasts and alcoholics of the kind, their amorality is so dreadful that dignifying their own conscience has become a turbulent! Okay, let us borrow the 'Mirror Perspective' in here, he is a reflection of me or you, right! The least we should do is to advise them but not to repel, this would serve as the first rehabilitation centre which is very scarce in Africa today. We have been bewitched by the advantages of the nuclear family and have let go of the extended family system which is known to us. So helping each other is now a taboo, especially, if the recipient is so far away from our gene, but immediately when he dies, we would exaggerate about his personal profile and send humongous amount of money to cater for his burial service! Instead of fraternizing with them, we rather mimicked the way they talked, walked and do slept while standing and gave them various names to suit our laughable interest! Yet, we see them as nuisance and liabilities, thus they have declined in the moral nuggets of self actualization and righteousness! No wonder, we are the angels of the 21st century, Ayekoo! We have forgotten that this unconcerned and hostile attitude of ours is a rather languishing factor to them which is inimical to their return to 'home or common sense'!

Read Also: The Tales of Slay Queens; Did We Go or Come?

Many of us have penned down new resolutions already. It is my imploration that we would not forget to factor being caring to the said unfortunate people into it! We must revive our brothers who may have deplorably gone beyond the lowest ebb. You love yourself and, for that matter, you would not compromise falling short of the glory of God. How could you feel comfortable when your other self is going down? If you have bricks of wall where the next bricks are weak, automatically, the bricks would slid in utter ruin. That is the essence of Prophet Muhammad’s (pbuh) tradition which says that "you are a brick to another brother, supporting each other". We must show unflinching support and love to those people without not only extending our time and conscious efforts to those among them stemming from rich homes!

Read Also: Ebony Reigns With A Latest Release Under The Auspices Of Her Dad

Is it the society that has failed us or we have failed the society and ourselves? I would agree to the latter, the scriptures are impeccable but man is always in contention. As for the state, the least said, the better! Today, I have begun to see everyone as a true reflection of me; I will wish for him whatever goodness I prefer for myself, and callousness would be far-fetched of me; if you look at me, I will smile passionately in return to exemplify the togetherness of bricks entangled in a lofty construction. I will not be resentful but will feel your pain, accommodate your worries and keep my covenants to you, O my unfortunate brother!

The development of me must have a correlation to you and the society at large. Let us imbibe this Mirror Perspective into our life and from today we should be breast that apathy anywhere is a threat to sympathy everywhere!

Do not be a self centered man only but love yourself and provide a livelihood for people around you. That makes you a better human!

For jobs in Ghana visit jobsearchgh.com