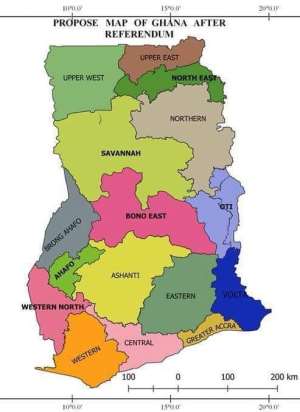 Introduction on Regions In Ghana
Gold Coast currently Ghana started with 3 major divisions/regions about 100 years ago, and by 26th December, 2018, Ghana had ten (10) regions. Currently Ghana has sixteen (16) regions, and this was after a referendum for a creation of six (6) new regions was held on 27th December, 2018, after some opinion leaders and stakeholders in seek of the respective new regions had respectively petitioned President Nana Addo Dankwa Akuffo-Addo. Some of the petitioners started their petition for the respective new regions since the 1970s, and that is over forty (40) years ago. The current 16 regions of Ghana are; Upper West, Upper East, North East, Savannah, Northern, Brong Ahafo, Bono East, Ahafo, Ashanti, Eastern, Western, Western North, Central, Volta, Oti and Greater Accra, with the 6 new regions being; North East, Savannah, Bono East, Ahafo, Western North and Oti.

I will first of all commend the Ministry of Regional Re-Organization and Development, the Commission of Inquiry, the Media, the National Commission for Civic Education (NCCE) and the entire citizens of the affected areas for their great contributions through out the journey toward this smooth referendum. More over, the competency exhibited by the Electoral Commission (EC) for the peaceful and fair nature of the referendum needs much applause, it was splendid. Notwithstanding, I will still plead with the EC to investigate to the end, and bring to book any who might be found guilty of any of the alleged electoral malpractices. Furthermore, the President Nana Addo Dankwa Akuffo-Addo led NPP government's zeal and timely effort to equip the EC, Ministry of Regional Re-Organization and Development, and the Commission of Inquiry with timely and adequate resources and funding needs appreciation, without that the referendum would never had seen the light of day.

Despite the fact that these new regions were created out of a desire to solve specific problems mostly economic and developmental in the affected areas, we should still never lose sight over the fact that by ones desire to satisfy a selfishness or as a result of a political and/or tribal expediency and fixation, but never the economical need of an area, the spate of new regions' creation in future if not checked might get out of hand, especially due to how porous the 1992 Ghana constitution is with respect to the creation of new regions, and it reads under the Chapter Two (2), Territories of Ghana of the 1992 Ghana Constitution as;

"(1) Subject to the provisions of this article, the President may, by constitutional instrument -

(a) create a new region;(b) alter the boundaries of a region; or(c) provide for the merger of two or more regions.

(2) If the President, upon a petition being presented to him and, on the advice of the Council of State, is satisfied that there is substantial demand for -

(c) the merger of any two or more regions;
he shall, acting in accordance with the advice of the Council of State, appoint a commission of inquiry to inquire into the demand and to make recommendations on all the factors involved in the creation, alteration or merge.

(3) If, notwithstanding that a petition has not been presented to him, the President is, on the advice of the Council of State, satisfied that the need has arisen for taking any of the steps referred to in paragraphs (a), (b) and (c) of clause (1) of this article, he may, acting in accordance with the advice of the Council of State, appoint a commission of inquiry to inquire into the need and to make recommendations on all the factors involved in the creation, alteration or merger.

(4) Where a commission of inquiry appointed under clause (2) and (3) of this article finds that there is the need and a substantial demand for the creation, alteration or merger referred to in either of those clauses, it shall recommend to the President that a referendum be held, specifying the sues to be determined by the referendum and the places where the referendum should be held.

(6) An issue referred for determination by referendum under clauses (4) and (5) shall not be taken to determined by the referendum unless at least fifty percent of the persons entitled to vote cast their votes at the referendum, and of the votes cast at least eighty per cent were cast in favour of that issue."

Per the above portion of the constitution which touches on the creation of new regions, and also with the knowledge that the referendum is only held at the area of demand for the new region creation as has been determined and confirmed by the Supreme Court (SC) of Ghana, one can easily ascertain the very porous nature of the law governing the creation of new regions if any President out of his/her desire to satisfy his/her selfishness, or as a result of a political and/or tribal expediency and fixation would want to unnecessarily spring out lots of new regions.

In light of the above, I will as a result recommend to the government of the day to enact laws which can regulate a needless spate of creation of new regions as has been done with the Special Prosecutor Act to check corruption and also the Fiscal Responsibility Act to check the budget deficit in any year not to be more than 5% of GDP.

And some of such conditions which I believe should be included to help regulate a needless spate of new regions creation are;

1)Duration between New Region(s) Creation Referendums: There should be a law put in place to determine the number years another petition for another regional creation referendum can be received after one has been held successfully or not.

2)Size of Land: There should be a law put in place to determine at least the size of an area of a land that can qualify to be a region, so that we don't in the future get a possibility of a 1cm X 1cm area of land turning into a region in Ghana.

3)Natural and/or Other Resources Component of a Land: There should be a law which should determine the amount of natural and/or other resources a land should possess before it can be considered for a region so that it can easily help cater and build the economical needs of its inhabitants.

4)Population of the Land: There should be a law put in place to determine a least number of people a land should contain before it can be pushed for a regional status. This is to help prevent a few number of people of a land such as two (2) people getting a region of their own, and/or a prevention of an easy referendum.

5)Genuine Reasons: There should be a law put in place to determine the genuineness of the reasons by petitioners for a creation of a new region so that if the reasons of the petitioners do not meet the criteria which has been set, it will not be considered.

GETFund Scholarship: I Received It But Not As A Minister – ...
5 minutes ago

Ursula Owusu Is Not Monopoly Of Stupidity; We'll Descend Int...
29 minutes ago