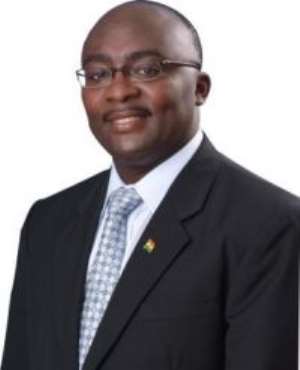 It has come to the sight of Ghanaians once again that the lying Vice president of the Republic of Ghana on Monday, 31st December 2018 was on top of issues justifying the dubious invisible acclaimed achievements of the current government with their menopause president H.E Nana Akufo Addo. It is not startling to hear the vice president shamefully touting what he and his government have done. It is normal to him and his environment since mendacities, propaganda and egotism has been a component of him since they were the means to avoid opposition which have not been exchanged for proper leadership and governance while in office. The vice president, his president and the NPP rolled out a whole deceit of promises which are now hanging around their necks and the only way to keep Ghanaians calm over such ‘sinful’ deceit is to go about making such proclaims as he has done today as part of his New Year message to Ghanaians.

Let me take on the various invisible achievements like their visible forces which has been on the streets of Ghana vandalizing state properties not excluding our human resources.

The vice president hurriedly touched on the wobbling free SHS which was implemented few months after their government took over from the NDC government. According to him, free SHS has come to reduce hardship on parents without recognizing the fact that parents are now in true hardship trying to send their wards to second cycle schools. As a result of free SHS, there has been pressure on the few infrastructures in the various schools, courtesy to the infrastructural development by the previous government. Students are seen sleeping in classrooms as dormitories, sitting on floors to learn and parents renting rooms for children who are made day students due to inadequate infrastructure. All these factors combined have exposed students to health risk, social vices and academic risk since they are forced into unfavourable conditions not suitable for learning. Free SHS, if the vice president is not aware, is going to create permanent brain ‘injuries’ to students which are going to cost the country in the near future. The introduction of the double truck system of education in the second cycle education requires complete change in the teaching syllabi of the SHS to enable students cope with the newly introduced semester system of education in these institutions. If the vice president is ignorantly touting free SHS as an achievement, he should do a community to community visitation, house to house checkup or individual interaction with the poor farmers whose children are also beneficiaries of such a social ‘devilish’ acclaimed intervention which is synonymous to the serpent deceit to Eve. The inability of government to listen to Ghanaians and its own people is causing all these wasteful policy implementations.

On the restoration of teacher and nursing training allowances, it is a clear indication that there is no coordination between the presidency and the schools or the beneficiaries. The allowances were announced restored but how many times the students were paid is a subject of concern. The government claimed to restore the allowances because the promise was loud and clear. However, with another intelligent and cheap way of going back to the system adopted by the previous NDC government, the NPP government thought implementation is still manifesto or promises when they jumped into changing all colleges of education to university colleges, the system with which degree will be offered by such schools hence students in such institutions will be treated equivalently to university students hence no allowances. Elders say there are so many ways of killing a cat and it is the same way the vice president think there are so many ways of keeping the trust of Ghanaians, now there is one way: say and do, period.

On the fight against corruption and accountability to the people, the words without action special prosecutor office established was mentioned. The establishment of the office of the special prosecutor is a better way of creating employment for people who claimed to fight corruption. As a concerned citizen of the republic of Ghana, I don’t need to be given an office before I can fight corruption. The Special Prosecutor office created is part of the loot and share insults chanted against the NDC when it was in power. Since the inception such a ‘special protection’ office for ruling government officials occupied by an unpredictable experienced lawyer like Mr. Martin Amidu, the number of corruption scandals that are not investigated by the office has demanded the investigation of the man himself and the people who appointed him. Instead, the presidency has become the second attorney general and ministry for justice or the Special Prosecutor’s office where allegations like Cash for Seat, A-plus chiefs of staff’s allegations and Kennedy Agyapong’s claims etc. are investigated and cleared by the president. My worry is that, the claimed corrupt officials of the NDC as seen by the president while leading the NPP in opposition will die and maybe their souls will be invited to the SP office for interrogation. One does not need to wear a second pair of eyes to see the cover-up the government is doing to Ghanaians.

The Zongo development fund claimed to be established by the current government is a laughter and a silent way of stealing state money. The minister in charge of the sector recently said Zongo women are to be empowered through Waakye business which sounded strange. The inferences one can make is that, government want to hide behind such unseen projects to spend money.

The planting for food and jobs project was a complete paper work without real implementation on the grounds. Despite the introduction of such a failed policy, prices of foods are high and cost of living is extremely high. The lives of farmers remain unchanged since such a policy was there to benefit people around the government and not the lay farmers. The subsidized fertilizers distributed were seen controlled by people of the government hence farmers could not take advantage. All these were evidenced on the national farmers’ day which was attended by a handful of farmers.

The vice president has once again created another inconsistent statement when he said they promised one district one factory and warehouse and are delivering coupled with the unseen number of dams said to being constructed in various villages in the Northern part of Ghana where no dugout is seen as part the projects. Since the start of the song that every district in Ghana will get a factory, how many factories have been earmarked to be built or have started operating in the name of the said project? Instead of helping to standardize the few already existing factories like Commander Sugar factory, Kumasi shoe factory and the tomato processing factory in Upper East, the government is wandering about shouting loud on top of its voice saying it has inaugurated block making factories and others which shows how lackadaisical the government is in building Ghana for the future. The president and his team though they bite more than they can chew, they would have managed it better if proper care was taken, but the careless and incessant pronouncement of achievement as a means of keeping the trust of Ghanaians is what is causing the drawbacks.

On job creation which was a major campaign promise, the vice president was heard boasting of the NACOB and the NEIP programs as interventions to reduce graduate unemployment and hardship. The unfortunate results of the two programs is that whereas the former has created jobs for ghosts and unqualified people, putting square pegs in round holes where people were placed at places their services were not needed the former has become a ghost project where those claimed to had qualified for the said amount allocated for them cannot get access to it to start their own businesses. It is unfortunate that the government peddle on falsehood to navigate through the minds of Ghanaians and the international community. The two programs at the end of the day have not reduced the unemployment rate in the country but rather increased demands on graduates since they are thought to be employed.

Again on fiscal discipline, inflation, currency stability and economic prospects of the country, the vice president took credit for any positive improvement but put all the challenges to global trends without reckoning the happenings two years ago where Ghana was seen as not being affected by global changes. He, as the head of the economic management team, though he is now a statutory head, the cedi has struggled to stabilize under his watch. The exchange rate of today tells Ghanaians that we will sell all our cedi for a single dollar if the ‘white elephant’ Bawumia still manages the cedi as he is doing. Under his watch, the NPP government has borrowed more than necessary to the extent of putting Ghana in a century debt where our grandchildren will bear innocent cost of paying our reckless borrowing without utilizing what is borrowed. The public outcry from market women and men, drivers and even some government officials is a clear indication that the economy is managed by a bookish economist who cannot correlate the economic diagrams to reflect in the lives of the ordinary Ghanaian.

To conclude, the vice president, his boss-the president of the Republic of Ghana and all their appointees should reflect well on what they have done better for Ghanaians during their two years in office, compared to what they said would have done and give a better new year message to the people of Ghana. Day has broken Ghanaians, we have washed our faces and can now read between lines to differentiate promise from reality, truth from lies and true leadership from self-centred leadership.

To Ghanaians, no condition is permanent as always been said, the same way change came in 2016, it will come in 2020 with true execution, continuation of projects and programs and development of Ghana under the care of the National Democratic Congress (NDC) government.

In unity we will build.