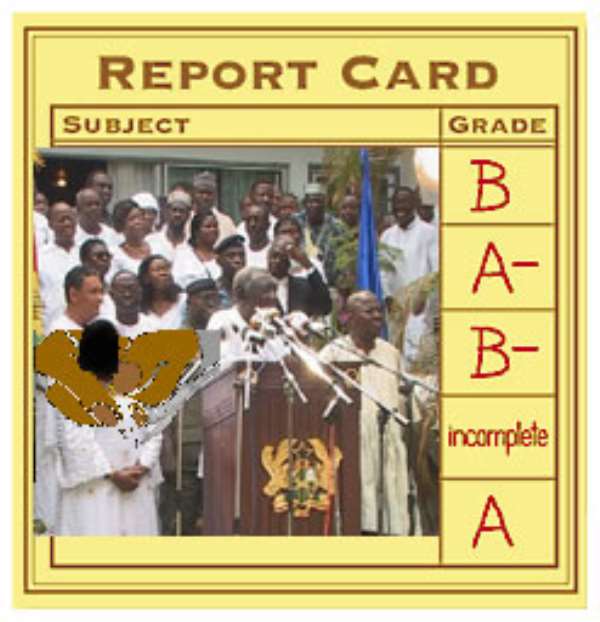 Accra, Nov. 23, Statsman -- IN what is likely to be the most radical reshuffle under President John Agyekum Kufuor, the speculation inside the Castle, the seat of government, is that about 10 Ministers are expected to lose their present portfolios with most leaving the government completely. The major casualties are said to include some of those seen to be actively campaigning as aspiring candidates for the ruling New Patriotic Party. The reshuffle, which is likely to be announced before the Party's congress next month, is informed by one main issue, Castle sources told this paper: to re-energise the administration, with the view to sharpen its delivery. There is a move, within the Castle, to persuade the President to trim down the administration. The argument is being pushed that : Several of the positions of deputy minister, particularly at the regional level, could be done away with Dan Botwe, the Information Minister is likely to move to Local Government and Rural Development. Richard Anane is expected to be dropped, a move which many are expected to see as long over due. Kwamena Bartels is rumoured to move from Private Sector Development and Presidential Special Initiatives to fill the pothole at Roads. Dominic Fobih, the Minister of Lands, Forestry and Mines is expected to be one of the casualties. The jobs of four Regional Ministers are also on the line: Ibrahim Cudjoe Quaye of Greater Accra Region, Sampson Kwaku Boafo of Ashanti Region, Nana Kwadwo Seinti of Brong Ahafo Region, and Joseph Boahen Aidoo of Western Region. Three of the four, who have held their regional seats since the NPP's first term, are expected to give way to 'new blood.' The Brong Ahafo head, on the other hand, is seen as having performed below expectation. But, the most controversial changes may involve some of the most high profile personnel of Kufuor's administration. For the last few months, President Kufuor is said to have been agonising over what to do about his 'ambitious' Ministers; those he considers to be “peaking before time.” But, that list includes some of his most able men. The government officials who are seen to be actively campaigning are in this order, starting from those considered to be the most active on the ground: In the campaign lead are Education and Sports Minister Yaw Osafo-Maafo, Vice President Aliu Mahama, Regional Cooperation and NEPAD Minister Kofi Konadu Apraku, Defence Minister Kwame Addo-Kufuor, Trade and Industry Minister Alan Kyerematen, and Foreign Minister Nana Addo Dankwa Akufo-Addo. Hackman Owusu-Agyemang, Minister for Water Resources, Works and Housing has lately picked up his campaign. The President is expected to sack at least two of the active aspirants from his government. Some may also lose their current jobs, while remaining in government. A senior Cabinet Minister is, for instance, expected to be offered the position of Regional Minister. Supporters of some of the candidates, including Nana Akufo-Addo, Mr Osafo-Maafo, Dr Apraku and the yet-to-show-his-hand, Dan Botwe, are pushing their candidates to either quit the government next year or be allowed by the President to openly launch their respective campaigns. They cite America, where even with a far superior infrastructure, the presidential campaign starts a whole year before the primaries and two years before the presidential election. What is quite clear is that the campaign proper for the NPP flagbearer will definitely be on next year, regardless of the wishes of the President. The move, currently under consideration to relieve some of their portfolios, is designed to also carry a clear message from the Castle to the aspirants, that the President expects total commitment from his men. Ghana's High Commissioner to the United Kingdom, Isaac Osei, is also said to be considering quitting his post in January to launch his campaign. But, Foreign Affairs sources say he has shown interest in the Washington post, too. Another person, apparently lobbying for a job change is Dr Addo-Kufuor. He has shown interest in the Foreign portfolio, and sees that as a major boost to his political stature. Arthur Kennedy and Boakye Agyarko, both US-based presidential aspirants for the NPP have taken bold and public steps to launch their campaigns, exploiting the luxury of not being members of Government to criticise its performance. The vice president of the Bank of New York, Mr Agyarko, during his recent visit hinted colleagues about his ambitious plan to convince another probable candidate, Interior Minister Paapa Owusu-Ankomah, to join him on his presidential ticket bid as Vice. But, the two outsiders are not the only ones who have made their intentions known to the public. Nana Akufo-Addo, for instance, boldly came out publicly to announce that he is definitely standing. He did this on Paul Adom-Otchere's Good Evening Ghana show on Metro TV two weeks ago. While insisting the issue now is to serve this government to succeed, the Foreign Minister admitted that he does what he can to keep up the momentum with the others when he is not abroad on official duties. A man known in inner NPP circles to have incurred the greatest displeasure of President Kufuor by his heavy campaign schedule is Mr Osafo-Maafo. But, friends of the hardworking MP for Akim Oda insist that he does not allow his need to build up strategic links within the Party to get in the way of his official duties.
The President is due to travel to the Commonwealth Summit in Malta tonight. The Castle has, however, dismissed the possibility of him announcing the reshuffle before he leaves.