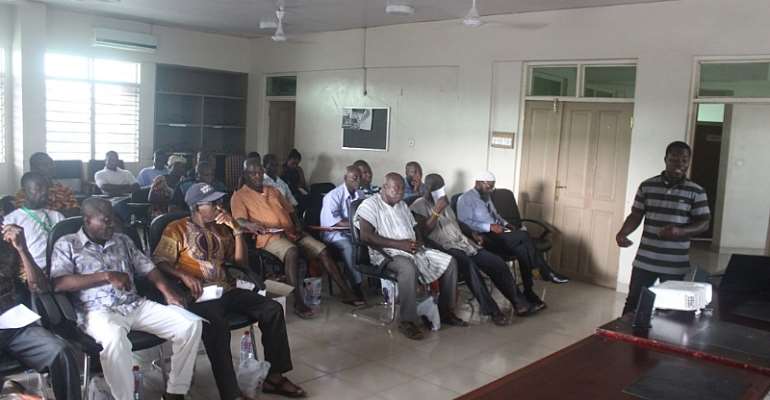 The Project Officer of Opportunities Industrialization Centres International (O.I.C.I), who are the implementers of the TEN Water ; Sanitation and Hygiene Arnold Geoffrey Arthur is cautioning politicians to desist from interfering in the prosecution of sanitation offenders.

in Shama to introduce the TEN Community Environment and Beach Improvement League table challenge, Arnold Arthur revealed that the quest to ensure best sanitation practises is being undermined by political interference; "..in most of the six coastal districts that we are implementing the TEN WASH project; the various environmental health officers complain how anytime sanition offenders are apprehended and being processed for court, there are all manner of calls from politicians and highly placed persons to drop the cases and leave them to go free;..." ; he revealed. He added that this becomes a great disincentive for sanitation laws to be enforced as others too feel they can go scot free with such offences.

Wisdom Tsidi who is the Monitoring and Evaluation Officer of O.I.C.I explained that the TEN Community Environment Beach Improvement League Table is in a bid to engender competitiveness in ensuring good water sanitation and health environments in various areas of the implementation of the TEN WASH project in the Western Region ;" it is like being in a classroom and during exams no one will love to be the underperforming one ; so an independent set of judges will be put together and the best 3 township will win prizes at the district level then a regional one will also be held"; he revealed.

The Programme Manager George Dorgbetor, encouraged the various assemblies to strengthen their law enforcement role and share such expertise with the various communities. He said more corporate assistance is being sought for by O.I.C.I. to expand the competition.

Emmanuel Kondor who is the Environmental Health Officer of Shama appealed to the various chief fishermen to relocate their refuse dumps away from the shore and as well recruit sanitation volunteers.

The Chief Fisherman of Aboadze in the Shama District; Nana Mohammed Odawur and the assemblymember of Shama Apo, David Koomson lamented about the lack of support from the District Assembly during clean up exercises expressing pessimissm about their areas inability to make it on the TEN Community Environment Beach Improvement League Table Challenge.

The TEN WASH project is being implemented in the 6 coastal districts in the Western Region ; notably ; Sekondi/Takoradi; Shama ; Ahanta West; Nzema East ; Jomorro and Ellembelle to ensure best water sanitation and health practises.