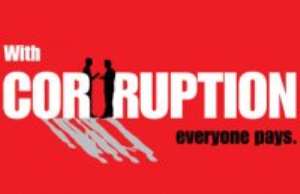 Corruption is one of the biggest threat to the well-being of a society. Corruption degrades the quality of the services and also ruins the life of the common man. Ghana is one of the countries highly affected by this threat called corruption. Political parties who promised to stop and take steps to eradicate corruption have being voted for power.

Corruption is not only at political level, but also the attitude of most people is corrupted as we observe various walks of life. Of course the root causes of corruptions are greed, love for easy money and resources.

These are our basic human natures and desires. Very few of us are able to resist this temptation, few wouldn't and few do in restrain way. I will try to find root cause of corruption by explaining how Ghanaian youths behave.

Almost every one is highly preoccupied and committed to get money at any cost, sportsmen, actors, doctors, advocates, chartered accountants and journalists.

Men of God, educationists and many other people not to speak of business houses, stock market investors. The big CEOs of many private establishments and of course the Government technocrats and the bureaucracy.

Nearly 300 years ago, President Thomas Jefferson said: “The only security of all is in a free press.” And in 1823, he said: “The force of public opinion cannot be resisted when permitted freely to be expressed. The agitation it produces must be submitted to…”

On the contrary, today in many different parts of the world, Jefferson’s statements could be re-written as: “The only danger of all is in a false media. The force of its false opinion must be rejected when permitted freely to be expressed. The agitation it produces must be refuted.”

These media players, most of them hide behind the smoke screen of journalism to do dirty, hired character assassins, without recourse to truth of conscience which also is corruption. When their expectations aren't met they embark on this drudgery journalism.

The worst culprits of corruption to me are those who keeps honing, hooting and trumpeting from the rooftops, the "journalists". They claim they aren't involved in this activity of corruption, however they demand or ask for what it termed in journalistic parlance "Soli".

In fact the moving and motivating force behind each and every activity of corruption is earning more money at any cost in short span as if there is no tomorrow. In fact, easy earning is the rule and politicians are no exception in association with the bureaucracy.

The everyday danger we are confronted with is that, the tenure of politicians is uncertain and to it, is the costly affair to run a political party and the organizing of meetings. The ever increasing election expenses, maintaining a battalion of executives, and public opinion.

The situation is such that even if a politician wishes to be corruption free, it is difficult to survive long. It is definitely not to say that, there are no uncorrupted politicians and officers, but their number is limited and struggling to survive. Above all else, a corrupt society is what the "neo-rich" wants and delight perpetuating same.

The worrying aspect is its impact which is heavily on the common man who are in the majority. We must definitely not overlook the driving force behind the present day, development and accumulation of wealth by the few; the political parties and their financiers; including international donors, that invariably support this corrupted system and criticize perfunctorily.

I think the real question is why do we elect corrupt politicians? For example, in the current situation, there are more politicians alleged to having serious criminal charges than ever before, and the highest number of "crorepatis". We are oftentimes told, if we don't elect the corrupt and criminals, automatically politicians will become less corrupt. It is easier said than done, because the muscle of money have become important ingredients for reaching out to people and winning elections.

As country are we prepared to take forensic introspection of our lifestyle, behavior and accept that, we are catalyst to the corruption syndrome? Politics is a downstream from culture. Greed, the underlying emotion, is rooted very deep in our culture. Corruption is just a behavioural expression of this emotion.

Political corruption is a safe canopy, underneath it hides all lesser evils, honing their skills in anticipation for a bigger, brighter opportunity.

It is we the citizens of the country... THE MANGO PEOPLE.

The System is corrupt, because we make them corrupt. We vote for wrong people, for some promises and favours.

We make so much noise about Corruption and then end up giving a small bribe to get our work done asap.

We never think on a larger scale i.e. on the whole country's basis, but we always think on the personal front. So, whom so ever we blame, the politicians, the police, the system.. it is we the people of Ghana who are corrupt "deep down under".

There is no level-playing field left in Ghanaian elections, and almost nobody is talking about creating such level-playing field via state funding of elections and other electoral reforms. For most politicians and sadly even many people, it is "my party first, Ghana second".