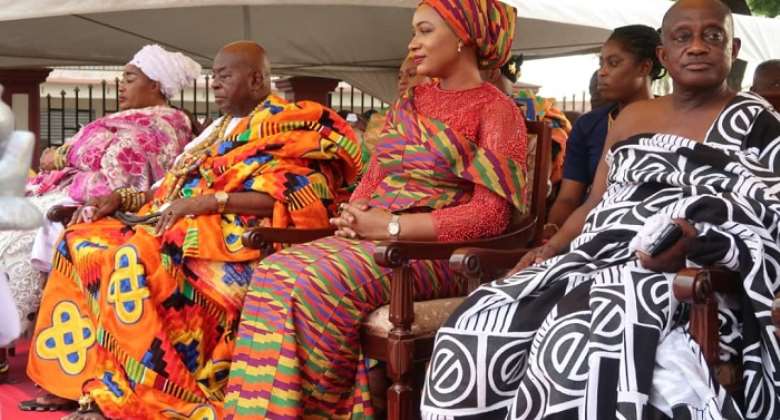 The Awomefia, Samira Bawumia and other signatories on the dais.

THE ASANTEHENE, Otumfuo Osei Tutu II, and the Awomefia of Anlo State, Togbe Sri III, have urge Ghanaians to engage in activities that will protect the peace and unity of the nation.

The two leaders separately gave a speech on peace during the last Akwasidae Festival of the year which was graced by the Second Lady, Samira Bawumia, in Kumasi on Sunday.

The Asantehene stated emphatically that Ghanaians are one people with a common destiny so they should not allow politics to divide them.

Using the people of Asante and Anlo as a case study, he said people from these two tribes have lived in peace and harmony for so many years but some faceless people want to use politics to divide them now.

The Asantehene reminded Asantes, Anlos and all other tribes in the country that they are one people therefore they should not allow partisan politics to divide them.

He recounted the strong bond between Asantes and Anlos in the past through inter-marriages, business and other activities.

“At a personal level, my late uncle, Oheneba Mensah Bonsu, who mentored me from my youth, married from Anlo and gave us … lovely sisters, with whom I grew together.

“It is one of the countless inter-marriages that have left our two people intertwined in a very meaningful manner”, the 16th occupant of the Golden Stool disclosed.

He added: “Unfortunately, we have had to contend lately with the negative effects of discordant politics, which seeks to sow mistrust and set brother against brother”.

Otumfuo, who is passionate about the peaceful coexistence of all tribal groups, said: “Happily today, we have the opportunity to slam the door firmly to the purveyors of doom and discord. So let the message go out from here . . . that a new dawn has broken, that the era of mistrust and discord is history and Asante and Anlo, like long-married couples, have renewed their vows of undying love.”

Togbe Sri III, the Awomefia, who visited the Manhyia Palace with 60 chiefs and 49 queen mothers, also said Asantes and Anlo people are one people with a common destiny.

“My visit to Kumasi today is to consolidate this friendship and trust”, he stated, recounting that Asantes and Anlo people have been great friends since time immemorial.

He stated: “I want to assure the Asantehene, Nana Osei Tutu II that my Anlo kingdom, chiefs, queens and people will continue to maintain the old alliance, binding our two great kingdoms”.