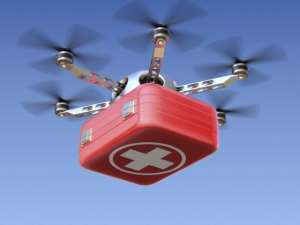 “Watch out…they are coming! Be careful not to be hit by these stupid things!” shouted Kwame out loud jumping behind a palm tree into safety. His heart was beating; his blood pressure had gone up. In his face anger was clearly visible. The hands in his pockets were ready to defend himself.

Kojo joined his friend following every move the two drones above their heads were performing. They seem to be out of control. “Which stupid idiot is flying them…that person needs serious punishment for development…I am telling you.”

“The madness is not only that these drones were procured unlawful and overpriced for our Politicians to chop once more, but did you sees something very critical down below the drones?” was Kwame laughing out loud knowing that in the end brain sense will carry victory, not money sense.

Kojo opened his eyes wide, his mouth was not able to hold it back: “But…but what is that my brother?” He closed his mouth again seeing the drones landing on the ground nearby. “I cannot believe this…they carry nothing…simply nothing…just flying around for fun or what?”

Kwame stood upright before the palm tree laughing out loud with his right hand before his chest point out: “These drones carry nothing as we have no blood and no medication to move…NHIS is simply bankrupt and has no money to fulfill its assignment.”

“Another Ghanaian nonsense for our President to glorify himself…these people do not care about us ordinary citizen in Ghana at all,” concluded Kojo with anger in his stomach. “I feel seriously pain…get sick over it.”

“The medication for your problems is simply…take actions, stop talking…fight for your right God has given you to enjoy this beautiful country of Ghana…a Nation supposed to be great and strong…a ruler of many nations…,” advised Kwame while they were walking along Korle-Bu Teaching Hospital passing ATM machines one by one.

“It is not that there is no money in the country for us to enjoy…it is only misused…simple as that,” commented Kojo seeing people taking their money from the machines.

“When I think of Kublai Khan, the grandson of the famous Dshingis Khan that as a Mongol had developed Beijing as the capitol of a great country named China had decided to take Muslims and other foreigners to take key positions in his developing country realizing his own people were not suitable for such impotent tasks…his empire and dynasty became one of the most fruitful and powerful among nations visible still today in the spirit of Chinese and their cultural heritage. It is that spirit which overcame Maoism making China the global player it is today. Chinese observe others very well, learn from them and over time openly secretly overtake them,” lectured Kwame his old time buddy way back from Kindergarden crossing the road carefully to reach James Town.

“My brother…you are talking wisdom,” complimented Kojo his friend having seen with him bad and good sides of life.

Kwame stood at the Gulf of Guinea stretching out his hands to the horizon at the other end of his visible world saying firmly: “We are not limited by success…we are a country at ground zero. This gives us a great historic advantage when we realize we are human beings with a brain. The brain is not only made to find a woman for sex, but to study the white man very well, see what he does right, find out his short comings, intent new ideas for products, services and how better to govern a society…for us in years down the line to overtake him and rule his world.”

“My good friend…my brother indeed!” was Kojo stretching out his hands as well seeing the ships from Ivory Coast heading along their shores to Lagos and Togo. He took a deep breath of the salty waters, smelling plastics, dead fish and saw coconuts shells dumped by the roadside ignorantly, natural material that could be converted to a high quality products for making good income for many saying with sadness in his voice: “When I am sick, I look for the highest qualified Doctor to heal me, when I have a legal issue, I do not go to any lawyer for help me, when I build my house, I mandate a very experienced Architect to build my dream come true…but when we as a people think of politics, we believe anyone opening and closing his mouth can make us a happy nation…we are fools!”

Kwame added with a sophisticated and sarcastic smile on his face: “We train Political Scientist in our country, pay their fees, feed them and dump them on the firewood of history to be Lecturers, Journalists, Authors or Advisors only…how stupid are we to do that?”

“We are simply not normal…our mind is wicked…and as long we do not accept our shortcomings and learn to make our potential abilities and possibilities our strength over nations, we deserve to live in poverty,” said Kojo taking the hand of his brother walking along the see shore inhaling the beauty of an open mind.

“This country is not for us…only for God…and he has asked us to stand out among Nations…so let’s get our senses together, pull up our sleeves, and make our brain and wisdom glorious…than,” Kwame turned around hearing children laughter behind him, seeing girls and boys playing with a flat football on the beach,” than we truly will build a greater future for our own children to take the world into their own hands…and no longer allow other Nations to hold us in their hands and squeeze as to their will…but let our will be done.”