GIIF Strips Lying Fadi Naked: He Lied We Don’t Have Any Compost Plants Agreement With Jospong 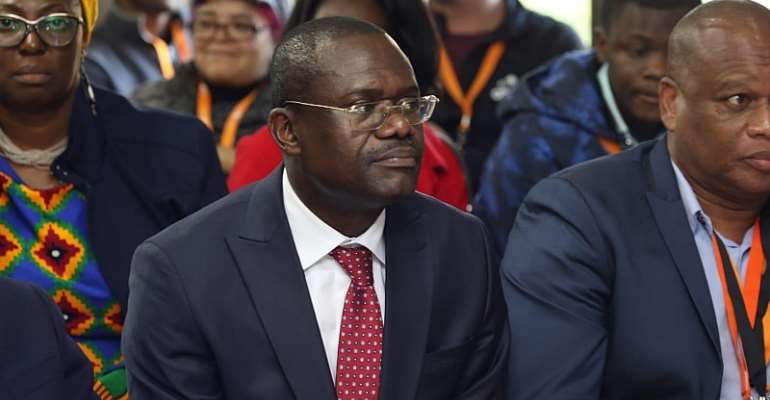 The Ghana Infrastructure Investment Fund (GIIF) has laid to bare the maliciously fabricated heaps of lies served to Ghanaians by none other than the fat lying self-style political begot of a Lebanese descent Fadi Dabhousi.

A citinewsroom.com report has said the “GIIF says it has not entered into any agreement with any of the companies under the JOSPONG Groups of Companies for construction of Compost Plants” in some regions of the country.

In an interaction with the media in Accra, a highly-placed official of GIIF denied flatly any funding support for the proposed Compost Plants project submitted to the office by JOSPONG for consideration”. Isn’t that a business man with vision and solutions to waste management problems?

In an article by Fadi Dabhousi titled “GII and Joseph Siaw Agyepong: Marriage of convenience”, and published by www.ghanaweb.com, Fadi suggested that Prof. Christopher Ameyaw Akumfi the Board Chairman of the GIIF is in an ardent relationship with Zoomlion and largely Joseph Siaw Agyepong(JOSPONG) to reap the nation by making ‘Joseph Siaw Agyepong a multi-billionaire out of the poor man’s pocket’.

Fadi used unprintable words to describe the innocent Jospong in that article unjustifiably. As an admirer of Jospong the one who’s efforts has earned many a Ghanaian a job and food on the table for that matter I get angrier when the likes of Fadi a foreigner and Manasseh Azure Awuni the Bongo Boy who are not known for their job creation acumen or national problem solving intelligence sits down and try to denigrate the Jospong man.

One always wonders why these two people refuse to tell Ghana what they as individuals have done for the people of Ghana and all they do is Jospong this and Jospong that negatively. In the wisdom of the olden, they say the coin has two sides why will Manasseh and Fadi not tell the other side of the Jospong coin. You tell us (Ghanaians) how black and dirty the one side of Jospong is but never have we read or heard them say however the other side is so so and so. Or they have no idea of that side?

Now, GIIF indicated that, JOSPONG Group in 2017, submitted a proposal for setting up Regional Compost Plant Projects to GIIF for consideration and funding, following which the JOSPONG GROUP was asked to make a presentation to GIIF, which they did sometime last year.

I have advised Fadi a couple of times that as an elderly person you speak on facts, you don’t perpetuate lies and allegations. I have told him that at his age allegations doesn’t befit him nor hearsays and that he should be factual or shut up forever. But wait a minute is it not the same Fadi who says he operates at the Jubilee House? How then can he get even this one factually wrong? I think it is becoming clear that this foreigner doesn’t mean well for us Ghanaians. He is burnt on pulling down the little we have and we won’t allow that.

Fadi should be telling us what his parents brought from the unruly Lebanon and how he survived on our (Ghanaians) blood till date and he thinks he can direct the pace here in Ghana. He doesn’t even appreciate the fact that we fed his parents and supported them but they trained him this badly. The Kassenas say “The child who has no father siphons wisdom and advise from the parents of his/her friends”.

Fadi if your parents failed to train you well because they lack it themselves couldn’t you learn anything from my Ghanaian parents whose children befriended you growing up? See what has befallen from your nose poking into none existent matters. Be advised: you should not chase a snake empty handed when, it turns on you, your hands and legs cannot help you. A wise word of caution from a proud Northerner. Next time you mess up I will get at your parents and you will dislike me even though it is a game.

I shall be asking H.E Nana Addo Dankwa Akufo-Addo pretty soon whether he has set up this good for northern Lebanese to be writing the nonsense and maligning good business people. He poses as Your Excellency’s confident and uses your name in vain. The President would have to tell us if he has not given impetus to this guy from nowhere to be doing this how can a foreigner now pretend to own the New Patriotic Party more than the good old Prof. Akumfi and he is even scaling to foist and oust him out of the GIIF.

Fadi must know that the child who is determined to keep the mother awake is never going to have a sound sleep. Until I die, I won’t sleep for a foreign ass… to dictate anything here. You have home perhaps things are better there than here get out of our way.

Here is not Lebanon it is call Kwame Nkrumah’s Ghana let it sink in your ugly block head as for us we won’t sit down and allow you run down our treasures and monopolies. You wish is not ours’ hu?, oh yes I know that left onto you Jospong should have been a Lebanese in Ghana, your mind. You even wish you control the NPP my party isn’t it? The Frafras will say “Fu zuu beerike me” your head is overcooked, nothing is functioning properly.

As DL will have it, “If Jospong were your brother you will say business tycoons and government leaders should sing his name”. Afulo

I am happy that the GIIF called this press conference and made you totally useless and I am told Jospong has already procured six mobile compost plants all by himself, one is being installed at Jamestown currently, two are being cleared at the port and three to be cleared by January 2019.

Each of the regions that is Eastern, Western, Central, Northern, BA Regions among others will each have one to create jobs for Ghanaians and the produce used to boost agriculture if that pains you too go home.

Watch out I will go to parliament to get them to let you prove they are all bought by Jospong as you earlier said. You think you will go free? We will prove to you that you don’t own the party, foreigner.

When you drink, don’t drink your heard off, reserve some sense behind to protect your tomorrow. I drink more than you but I speak sense mtcheew you too?.