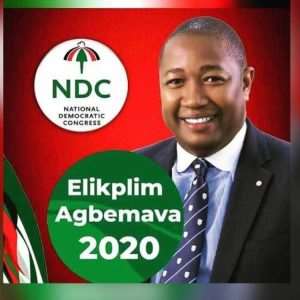 A flagbearership aspirant of the National Democratic Congress (NDC), Elikplim Agbemava, has bowed out of the race.

He did so by declaring his support for John Mahama who is also seeking to lead the party into the 2020 elections.

In a press statement copied to citinewsroom.com, the young lawyer who was seem not to make any inroads in the race, said he will not be picking nomination forms before the extended deadline elapses on Saturday.

While failing to give exact reasons for his decision, Mr. Agbemava admitted that the decision was “much unexpected,” having given strong indications much earlier that he was ready to battle it out with eight other hopefuls to lead the party into the 2020 presidential polls.

There are suggestions Elikplim Agbemava cannot raise the nomination and filing fee of Ghc320,00, despite the slight reduction in the amount.

He urged his supporters to join him throw their weight behind former President John Mahama to lead the party and wrestle power from the incumbent New Patriotic Party (NPP).

I encourage my campaign team and all supporters to submit to the vision of the GO4JM Campaign for total and a resounding victory of the National Democratic Congress (NDC) in 2020, he said.

I wish to announce that after much soul searching, prayer and consultations with well meaning Ghanaians, loved ones and family I have d ecided to abate my push for the presidency come 2020 and throw my weight behind His Excellency John D. Mahama.

I know this is very much unexpected. However there is much wisdom in taking this decision. It is also in line with the majority of the views in our great party that he is the best person to lead us into battle come 2020.

Beyond that, our own future vision and ambitions must be anchored on a broad based support that will make it easy to unite the party when it is time for us to lead.

In the circumstances, I will not be picking up nomination forms by the deadline set by the National Executive Committee. I encourage my campaign team and all supporters to submit to the vision of the GO4JM Campaign for total and a resounding victory of the National Democratic Congress (NDC) in 2020.

I will like to thank God for His direction at every step of the way and express my profound gratitude to the National Council of Elders, the National Executive Committee, Friends ( far and near) # FriendsofEli2020 and my entire family for the various roles played in this short but momentous campaign to lead the youth of GHANA into a prosperous future. The future is bright and we will lead at God's appointed time.

One other flagbearer hopeful, Kojo Bonsu has also withdrawn from the race.

The 8 aspirants will now contest in the election. They are; John Mahama, Prof. Joshua Alabi, Alban Bagbin, Sylvester Mensah and Stephen Atubiga.

The NDC will hold its presidential primaries on January 26, after an intervention from the Council of Elders pushed it from January 19, 2018.