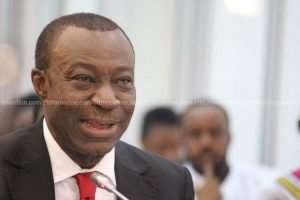 The Monitoring and Evaluation Minister, Dr. Anthony Akoto Osei, has said the latest AMERI renegotiated and enhanced deal will save the country some 51 million dollars.

The new deal was laid in Parliament on Thursday by Energy Minister, John Peter Amewu after withdrawing the Novation and Amendment Agreement which many believe led to the dismissal of former Energy Minister, Boakye Agyarko.

Speaking to Citi News, Dr. Akoto Osei who also serves on the Economic Management Team said the new deal will put to rest previous issues with the AMERI Power plant.

“We keep the two more years and from now till then we are going to save approximately 51 million dollars. What has gone by we cannot change, the payment has been made but we have been able to defer the debt that we owe to March 2019. The first payment of 10 million has already gone.”

Government withdrew the controversial AMERI novation agreement before Parliament, and replaced it with what it has captioned “renegotiated and enhanced terms” of the power management with AMERI.

Boakye Agyarko, a former Energy Minister, was sacked by the President after he [Nana Akufo-Addo], approved the reviewed deal which turned out to be unsatisfactory.

The current Energy Minister, John Peter Amewu, who initiated the process to withdraw and replace the agreement said the decision was due to another revision of the already reviewed agreement by the government.

There was a huge controversy earlier this year when the former Energy Minister, Boakye Agyarko, laid a revised AMERI agreement before Parliament for approval after an executive order.

The Minority in Parliament kicked against the new deal which it said was economically disadvantageous for the country as Ghana would be paying more under the agreement than it initially settled under the John Mahama government.

The Africa Center for Energy Policy (ACEP) and some analysts said the amended deal which is to see ownership of the power plant ceded to a new company, Mytilineous, will cost the country in excess of $1 billion if it comes into force.

The original contract with AMERI was to end in about 36 months after which Ghana will own the power barges, but the new deal pushed the ownership period to 15 years, with the yearly payments at a cost marginally lower than the original deal.

Also, under the new agreement, critics said the current tariff of 10.4 cents charged on power produced, will increase to 11.7 cents for the same amount of power produced within the 15-year period, possibly translating into a higher cost of electricity for the consumer.

How calls for renegotiation started

The John Mahama administration in 2015 signed a contract with Africa and Middle East Resources Investment Group's (AMERI Energy) to rent the 300MW of emergency power generator from AMERI at the peak of the country's power crisis.

The power agreement with the UAE-based AMERI Energy cost 510m.

But according to the government, it found that the country had been shortchanged by AMERI as they presented an overpriced budget, and were overpaid by $150 million.

The Akufo-Addo thus commenced a renegotiation process to ensure value for money, but the Minority in Parliament kicked against it.

This has led to the replacement of the agreement with a new one laid before the House by the new Energy Minister, John Peter Amewu.