Is Ghana becoming a Banana Republic? 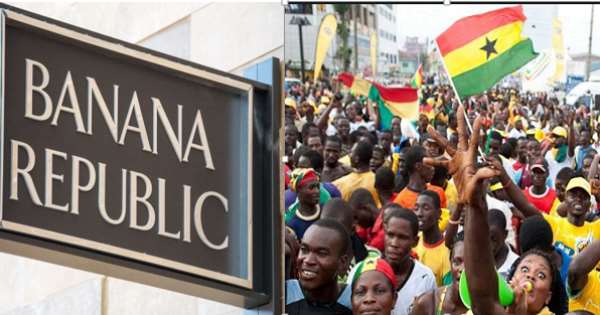 In recent years, the question which has been constantly itching my mind is Do we have a future for both the current and the next generations in Ghana? You will agree that the events unfolding in our motherland these days invoke desperation, panic and hopelessness. As a matter of fact, the soaring exodus of the Ghanaian youth in search of greener pastures over the past two decades calls for an imperative attention. In-effective governance, corrupt judicial systems, injustice, misappropriation and bribery are among the many things jeopardizing the future that Osagyefo Kwame Nkrumah initiated for our beloved country.

William Sydney Porter (also known as O. Henry), an American poet, phrased the term banana republics in early 1900s in his writings, to bring into light why some countries like Honduras and Guatemala were failing to develop. He explained that the two countries had weak economic bases with banana and other crops as well as some limited mineral resources forming the countries’ gross domestic products (GDPs). Meanwhile, bureaucracy, corruption, injustice and over exploitation of the masses had crippled the two countries from growth.

In current times, banana republics may include all countries which depend on limited Gold, Diamond, Bauxite and a few barrels of oil forming the GDP, and where there is corruption, massive youth unemployment, high public debt and above all, a judicial trap that catches mice and lizards and leaves the antelopes and the deer.

In the banana republic that I know, goat, cassava and plantain thieves get no leniency from the law. Five years, ten years and twenty five years imprisonments. Their judgment is within days or a few weeks.

However, corrupt political elites and public servants who suffocate majority of the people to their premature deaths through hefty stealing of public funds and bribery are not punished. Ironically, the oligarchs are being protected by the same law and, the very poor masses forming the base of the dominant ruling or opposition party. Where is justice for the looters?

The future of any corrupt country is disorder and armed robbery, poor healthcare, untarred roads, erosion, unplanned settlements, famine and many others because the planners refuse to plan, the ordinary people are corrupt, law enforcers refuse to enforce and some officials steal the money allocated for development.

Send your comments to [email protected]
By Charles Addai, Finland.