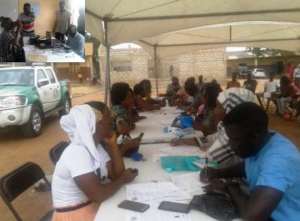 Registration for the Ghana Card begins in La Nkwantanang-Madina Municipality in the Greater Accra Region which is to become a fit for all purposes identification for every Ghanaian from Monday, December 3 to December 22.

This follows a successful exercise in the Adentan Municipality, the first point for the nationwide mass registration exercise. A total of 126,541 residents were captured, far exceeding the targeted 78,000, at the end of the three-week exercise, which ended on November 28.

At the end of an exercise, a mop-up centre is established at the NIA's office in the area to capture those who miss the deadline.

The Head of Corporate Affairs at the NIA, Mr Francis Palmdeti told the Ghana News Agency (GNA) in an interview in Accra, that the Authority had set up an Adjudication Committee to look into applicants whose cards could not be issued instantly due to suspicion of double registration and semblance of biometric data.

'I want to urge those who have not received their cards to be patient because the Committee is addressing issues involving applicants whose fingerprints and other biometric data are similar to ensure that everybody who registers has unique features,' he stated.

'However, persons with double registration or fraud issues would have their cards frozen, but those, subsequently cleared of any wrongdoing after the due diligence would receive their cards'.

On why commercial banks were not accepting the Ghana Card for financial transactions, Mr Palmdeti said the Bank of Ghana (BoG) was yet to integrate it onto its verification system or portal.

The NIA, he said, had, however, made that request to the Central Bank and it would prompt it to do so.

He said the NIA had taken measures to ensure that commercial banks and telecommunication firms integrated the Card into their operations, as well.

On the suggestion that the NIA should issue Tax Identification Numbers alongside the Ghana Card, Mr Palmdeti welcomed the idea, but said its implementation would depend on the preparedness of the Ghana Revenue Authority and its resources or budget.

He, however, expressed the optimism that the Management of the GRA might consider the proposal in the near future, since the institution was represented on the NIA Board.

When the news team of the GNA and some officials of the NIA toured some registration centres in Madina on Tuesday afternoon, the exercise was progressing smoothly.

The team visited the Queen of Peace, Madina Number One and Firestone Pentecost Primary School Registration Centres, it observed prospective registrants in long queues, while the NIA's Coordinating Registration Officials were verifying the documents being presented by applicants.

There were three Commissioners of Oaths at each centre to assist close relatives and individuals who wanted to vouch for applicants who did not have valid identification cards.

The registration devices such as the Mobile Registration Work-Stations and biometric machines were working well, while chairs had been arranged and tents mounted for applicants to sit comfortably to wait for their turns.

Prospective registrants 60 years and above were allowed to jump the queue.

The applicants are supposed to present eligible identification documents such as a birth certificate or valid passport and a Ghana Post Digital Address.

The smart card would eventually replace the existing cards and also be eligible for travelling within the West African-sub Region.

The NIA preceded the mass exercise, initially targeted at Ghanaians from 15 years old, with institutional registration.

Complained about the slow pace of the registration process have starting heightening up while others alleged that some government workers jumped the queues.