On an oil ship off Angola, life is work and privacy is a luxury 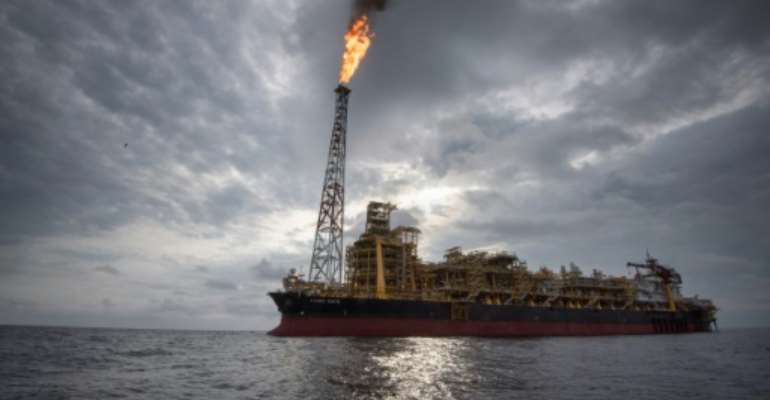 The "Kaombo Norte" is a vast oil-extraction vessel, moored off the coast of Angola. By Rodger BOSCH (AFP)

Moored in the endless South Atlantic Ocean far off the coast of Angola, the "Kaombo Norte" oil-extraction vessel is a deeply impressive sight -- 330 metres (1083 feet) long, with a tower 110 metres high sending a burning flame into the sky.

But inside, daily life on the ship is a different matter, with a crew of about 100 sharing narrow passages and confined spaces, living for weeks at a stretch in close quarters 24 hours a day.

The ship, owned by the French Total oil company, is an oil tanker converted into a FPSO (floating production, storage and offloading) vessel, pumping oil from deep under the seabed into its vast holds before collection -- a major innovation for the industry.

Typical among the crew is 30-year-old unmarried engineer Benoit Tanguy, who shares a low-ceiling office with a colleague during the day.

At night, he squeezes into a small cabin that has the rare luxury of a sea view, but which he must share with three colleagues. 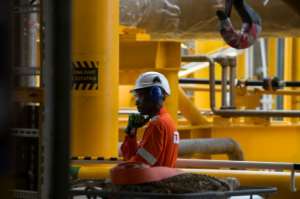 Tanguy doesn't complain, saying with a laugh: "We have little privacy. But because we are always surrounded by people, it sometimes helps to spend a few moments on your own."

"We are caught up in work, so the days pass very quickly," said Tanguy, who always dreamt of a life at sea.

"When I joined Total, it was exactly to work offshore," he said, explaining he spent two years on an oil platform off Abu Dhabi before taking a posting on the "Kaombo Norte".

His job is to ensure that the ship, located 250 kilometres (155 miles) northwest of the seaside capital Luanda, draws in oil at exactly the right rate from nearly 2,000 metres under its hull.

'Of course I miss friends'

For four weeks in a row, seven days a week, he analyses data, looking out for the slightest error or problem. 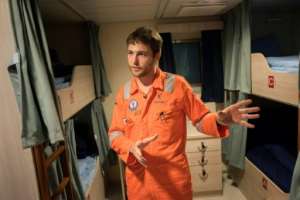 Then he leaves the ship via a helicopter shuttle to the shore and catches a plane home to Brittany for four weeks of vacation.

The Kaombo oil project -- which will pump 230,000 barrels a day when two ships are fully operational next year -- is still in its early phase, and Tanguy said he never gets bored even thousands of miles away from his family.

"In the current stage of development, the word 'monotony' does not even exist -- there is always something to do. Of course I miss friends and sport, but I live well," he said.

Eyes glued to his computer screen, his neighbour nods in agreement.

At 54, Christophe Marx is a veteran of offshore life.

He has spent 10 years off Angola or Nigeria working for a French subcontractor and says he has found a balance between his work at sea and his family life in the south of France.

"Whenever I have returned to a more normal life, with a weekly work rhythm, I realised that I was missing life at sea," he said, even if a month away at sea does sometimes mean missing family events back home.

"The best part (of the four-week on, four-week off way of working) is the month of real holiday, among my family, away from work. The worst is the month during which we are far apart," he said. 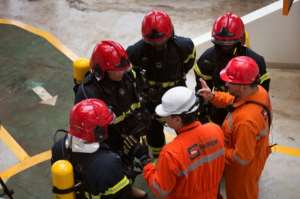 "You can be sure that it is always when the washing machine or the car breaks down."

Aboard the "Kaombo Norte", leisure time is scarce and the maze of corridors and offices quickly becomes claustrophobic.

One temptation is to go outside on deck to breathe in some sea air, but the climate is far from refreshing.

The equatorial air is heavy and moist, the smell is saturated with fumes and there is a constant din of engines, pumps and machines.

Helmets, goggles, gloves and safety shoes are compulsory in such a dangerous work environment. The ship holds up to two million barrels of highly flammable crude in its hold. 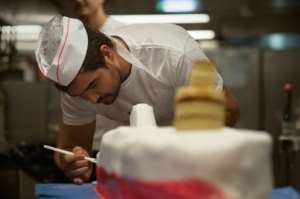 "The amount of energy under our feet is huge," said one crew member. "The slightest incident can escalate into a disaster."

At 36, Elgar Ferreira, from Angola, is responsible for ensuring safety standards are upheld on a vessel that is like a floating tower of Babel with 23 nationalities on board.

"One of the difficulties is that we have different cultures... different ways of seeing things," he said, "I spend a lot of time explaining."

The Portuguese chef, Carlos Macedo, plays an essential role in boosting camaraderie among the crew by producing a daily menu of culinary treats.

"One captain told me that my job was one of the most important on board," he said.

"When he finishes his day, the sailor needs a clean room, a tidy bed and a good dinner. My goal is to satisfy all my customers, without exception". 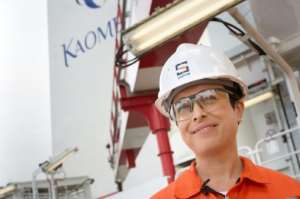 And as for women on board -- there are a handful.

"Here everyone is kind and helpful so it's quite easy," said Franca Sabattini, a 38-year-old Italian engineer.

"I say to all my colleagues: if you think that offshore is not for women, look at me: I'm here and I'm happy."

But the struggle for a settled family life is one issue that worries Tanguy.

"It's going to be four years that I am off-shore and then I would like a more sedentary life," he said.

"The other day we went round the table in the canteen, almost all were divorced."