Leaders In Africa Must Wake Up - Part Two

Our Black Mentality Killing Us
By Michael Kessey 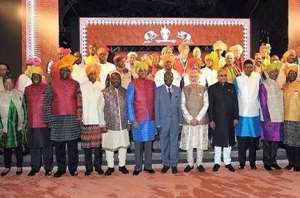 The God who created whites in those developed countries has not changed and it is disheartening these advanced countries are flourishing and the continent of Africa is swimming soundly in the pool of poverty making it look as if the independence our forefathers won for us was a curse and not a blessing. Our black mentality has caused us more harm than good and it is high time we valued ourselves as people whom God has blessed beyond measure. The potential in us is the same as that of people in developed nations who did not conjure magic to be where they are today that our leaders take delight in seeking for assistance.

Africa poor to a point of no return

They have failed to live up to expectation just because their actions and inactions in leadership have made the blood and toil of our forefathers meaningless. Our forefathers then had a laudable motive that is “the black man is capable of managing his own affairs” and as such it was imperative for Mother Africa to be liberated from slavery which hindered and sidelined the potential and capabilities of Africans. It’s about time our leaders put aside their inferiority complex which has led us to mental slavery thereby making us poor to a point of no return.

It’s disappointing when I think about our continent that God has blessed abundantly with lots of natural resources to the extent that there are a lot more which are yet to be discovered and our leaders have not put in place workable or utilitarian measures that would help our continent to grow from grass to grace or from poverty to prosperity. I find it difficult to understand why they don’t want the people of Africa to enjoy the best of life before they finally go to rest in the bosom of the lord.

Most of the developed nations we see today such as China, Malasyia, Japan, Indonesia, South and North Korea, India and many others were on the same scale with Mother Africa and it is surprising to know when it comes to natural resources they came nowhere near us and yet have developed to the fullest. Our leaders have no shame to take up their calabash to these nations for financial assistance. Malasyia for instance came to Africa and took the palm nut seed which we do not value as something that can generate a lot of income for us to be able to develop from the state of a beggar to a donor.

Our colour should not be a hindrance to our economic development

The achievements of great people like Aliko Dangote, Apostle Kwadwo Sarfo, and Dr. Frimpong Boateng are typical examples of personalities who have distinguished themselves well. Not forgetting, the late Busmuro Kofi Annan who was able to achieve all the laurels as a Secretary General of the United Nation despite being an African means being an African is not a hindrance to economic development and prosperity.

God has blessed Africa to be independent

People in Africa must learn to apply their God given –talent in order to bring development to the continent .They want to depend on whites for their development and survival which cannot be possible since a cockroach can never be innocent in the gathering of fowls. The whites claim to love us and want us to develop our continent, but the question is how can a problem solve a problem? The whites have been the dogs in the manger who do not want the blacks to be like them in terms of development. There is a saying that goes like “if you are looking for God and you see a white man its better you stop because you have already seen God which is not true. If the blacks walk in assumption that without whites we cannot develop then we have a little hope to advance to a higher level of development.

Every African sees a problem as a nail and its solution is the hammer. No wonder Africans are not interested in their own things. If they do, how on earth do they prefer Telenovela to our African drama which portrays our rich culture. If our educational system which is the weapon for the blacks and the whites to break -even are being designed by the whites then how can we advance when English and French are made compulsory in all schools in our continent instead of using our local dialects in teaching and learning like our counterparts in Asia and Europe?

I am not disputing the fact that English/French are both common languages spoken by our colonial masters but it should not be a basis for attaining a higher feat in our educational ladder despite performing excellently in other subjects such as Science, ICT, Vocational and Technical skills and many others which bring development. The question is do we need English/French language to develop our continent?

Let’s stop wearing the shoes of the whites

Do China and Germany use English / French language to develop? If the answer is no, then why do we still use English / French as basis to determine academic performance in Africa? It’s high time the continent used their own language to teach and do everything in order to make us unique. England for instance want to be unique by not joining the European union so we cannot also be unique and develop if we always wear the shoes of the whites who are the enemies of progress. So let us all join Ghana’s president in his crusade titled “Ghana beyond aid.” because the hands that feeds you controls you. I am by this medium appealing to all African leaders to join the crusade “Africa beyond aid”. The people of Africa should learn to be objective about issues bothering our societies and stop politicizing everything so that our continent can move forward to be able to depend on our own apron and not be tagged as shitholes or cemeteries. I strongly believe Mother Africa has the potential to rise up to its befitting status if our leaders change their attitudes in the reins of government. LONG LIVE MOTHER AFRICA.