KMA to embark on massive infrastructural developments in 2019- Mayor 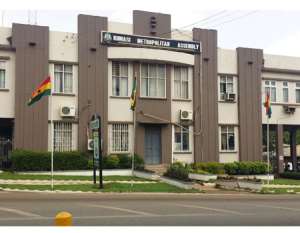 The Kumasi Metropolitan Assembly (KMA) has lined up projects to be undertaken for the 2019 year that will see the former ‘Garden City of West Africa’ benefits from massive infrastructural developments.

Others are the refurbishment of the Cultural Centre Museum under Public-Private Partnerships and a befitting office complex block for KMA.

Delivering his speech at the Kumasi Town Hall Meeting held on Friday, November 30, 2018, at Bantama, the Metropolitan Chief Executive (MCE) of KMA, Hon. Osei Assibey Antwi said the proposals have gone through the relevant procedures and will soon be approved.

The Town Hall Meeting was under the theme; “Building Partnership with the People for Sustainable Development of the Kumasi City”

“These proposals have gone through the necessary procedures; to wit, the relevant sub-committees, the General Assembly and the Regional Coordinating Council and forwarded to the Central Government for the necessary scrutiny and approvals,” he assures.

“For the successful implementation of these plans, we need your buy-in, suggestions and most of all, your support and cooperation as stakeholders in the development of Kumasi, he told the participants at the meeting.

The Mayor of Kumasi said as part of the 2018 Annual Action Plan, the Assembly were able to fully implement 137 projects out of the planned 178 projects, representing 77%.

“The backlog of 41 projects representing 33% which were not implemented due to inadequate funds and shortfalls in some of the releases received, he explained.

The following are some of the key projects we have been able to undertake in the year 2018; construction of 25 footbridges over selected streams in Kumasi, renovation and paving of the Metro Fire Station, Fencing of 1 Court building and supply and Installation of Streetlights in Kumasi. Others are Construction of 10 mechanized bore holes with overhead tanks, Completion and furnishing of new maternal and Child Health Hospital Ward and supply of the following educational furniture for 15 newly constructed basic schools in the metropolis. These are just but a few of the projects we have successfully completed for this year,” he listed.