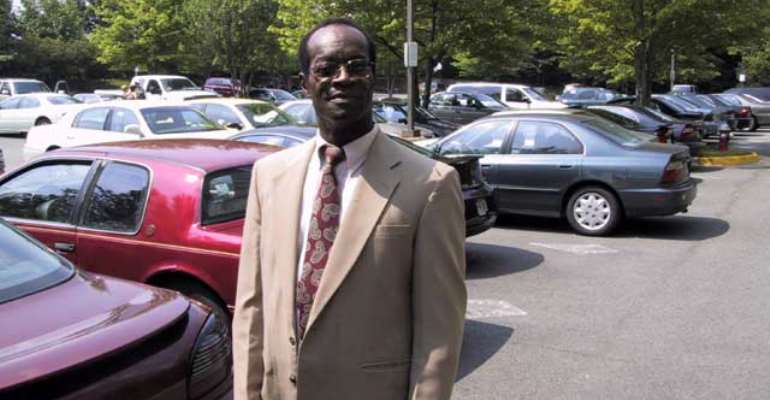 ... Practice what you preached when in opposition ... We should not repeat NDC's mistakes George Ayittey, a Ghanaian professor at the America University in Washington, has asked for the downsizing of the current size of the ministries describing it as a waste of the country's limited resources. A noted NDC critic with a pro-NPP leanings who fought alongside the NPP against his sister, Sherry Ayittey's party, the NDC, submitted in a discussion with newsmen that a country like Ghana with a population of less than 19 million people does not need a large number of ministers to govern it. Ayitey, an established commentator on African politics on all major U.S media houses like Wall Street Journal, PBS and CNN noted that the current number of over 80 ministers in the government is therefore on the high side; hence the need for President Kufuor to consider reviewing his ministerial appointments to reflect the population and scarce resources of the economy. He was speaking with newsmen in Accra over the weekend on a stopover trip in Accra. He suggested the appropriate ministerial appointments for Ghana as a country with its current population should be twenty (20). He was speaking with newsmen in Accra over the weekend on a stopover trip in Accra. He suggested that the appropriate ministerial appointments for Ghana as a country with its current population should be 20. Professor Ayittey further noted that these are the very things that he and his other people in the present NPP administration fought against during the PNDC/NDC era when Rawlings bloated his government with a large number of ministers. He stressed that the NPP, as the government in power now, should practice what it preached in the days of opposition and cut down on the size of its government, urging President Kufuor to take a second and careful look at his ministerial appointments in order not to repeat the flaws of the PNDC/NDC administration, which Ghanaians kicked against in the year 2000. According to him, these petty improprieties tend to increase the total expenditure of the country, but since the country's revenue is limited, it takes a large chunk of money from its coffers with the burden left on the shoulders of the poor taxpayer. This, he indicated, was a structural deficit problem, which should be cut down without any further delay, considering its harsh implications on the economy and the people. Obviously conversant with happenings in almost every country in Africa, in view of his approach to daunting questions on problems related to individual African countries, he indicated that after a careful consideration of developments on undoubtedly the poorest continent touted as the 'dark continent', he realized that countries in Africa seem to have the same problem; leadership crisis. He noted that almost all countries on the continent are experiencing this deficiency, which he said has crippled most of the economies. In Ghana for instance, he indicated that the country has a dysfunctional mentality in wealth creation which has been one of the NPP government's catch phrases since its return to power after the 2004 general elections, stressing that it has been misconstrued to mean another thing altogether, which is for politicians to amass wealth for themselves. He therefore wondered how politics has been misconstrued to be an avenue for amassing wealth in Africa, taking into account the affluent lifestyle of politicians who become rich overnight, upon assumption of office. According to him, “Politics is perceived to be the gateway to riches in Africa” and that until this erroneous mentality is changed, Africa, and Ghana in particular, would be treading in vain for only a few leaders to enjoy at the expense of the majority. To him, the Presidency should not be an avenue for amassing wealth but an opportunity for serving the interest of the very people who voted the government into power. This, he said, is the only way by which any given government can consolidate the votes of its people. Professor Ayittey, who is also the President of the Free Africa Foundation in the United States, noted that it would be prudent for President Kufuor to do more checks and balances of his government to avoid any form of vilification from his political opponents, who have been at his throat with all kinds of allegations ranging from corruption to conflict of interest, since he assumed office in 2001. He used Nigeria as one of such countries suffering from leadership crisis. Currently, he indicated that several State Governors in that country are milking the coffers of the country dry, under the ploy of constitutional immunity. This, he considered to be a dysfunctional elite mentality which should be discarded and treated with the scorn it so deserves. According to him, since Africa's begging bowl leaks horribly, there is always the need for its leaders to take concrete decisions which would positively affect the lives of the people rather than satisfying their self-seeking interest, indicating that corruption alone costs Africa a whooping US$148 billion annually. Of that amount he noted that US$80 billion is sent outside the confines of Africa, an indication that the continent is bleeding miserably, with its inhabitants suffocating.