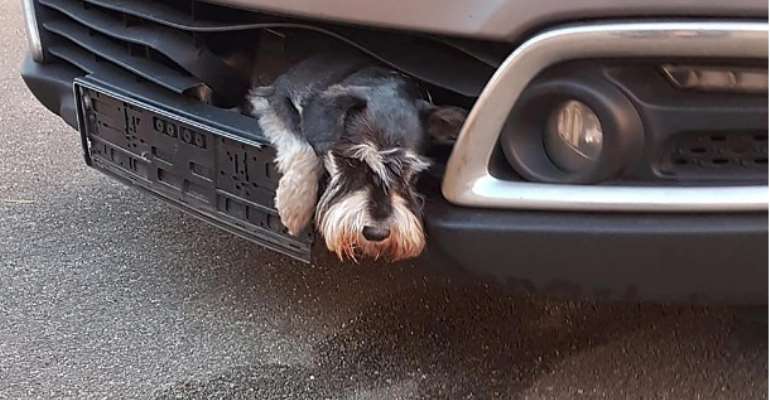 The Miniature Schnauzer dog, trapped in the grille of a car. The dog survived hours undamaged and could be returned to its owner.

In the German "Lower Saxony" State, a dog was hit by a car and stuck for several hours in the plastic engine radiator grille. The driver discovered the dog (from the race "Miniature Schnauzer") only after work.

A small dog got stuck in the radiator grille after a morning collision with a car in Lower Saxony. The 13-year-old dog "Miniature Schnauzer" was only discovered after work by the owner of the vehicle when she noticed a slight whimpering, as the police in Buchholz in the North Heath announced. Firefighters released the animal almost unhurt.

Afterwards, the 59-year-old female driver with the help of the police succeeded in reconstructing the events, she had noticed a blow on the car on Tuesday morning while driving to work in Hamburg in Bullenhausen. Because she immediately thought of an accident, she turned back. However, she could not detect anything in the darkness and drove on.

At about the same time a 40-year-old woman from Bullenhausen reported to the police her dog "miniature schnauzer", called "Tero" as missing, after a suspected accident with a car. She already suggested that it could get stuck in the front end of the vehicle. With the help of the officials, the animal and the owner finally found each other in the evening.

On a photo published by the police, you can to see how the little dog stuck between bent plastic engine radiator grille in the lower part of the grill. According to officials, the dog was not happy about his "predicament" and tried to bite the fire department's helpers.