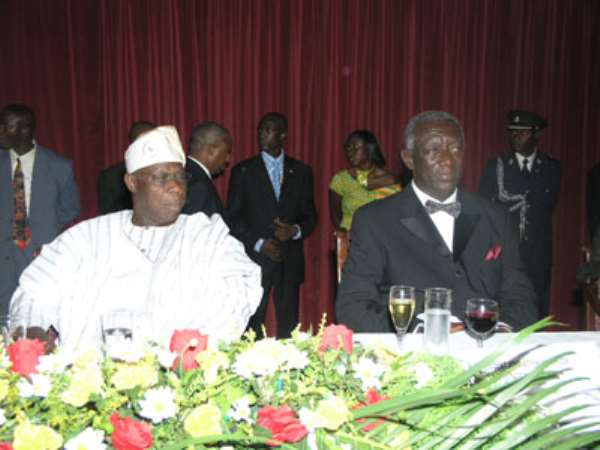 Abuja -- President John Kufuor has joined other democrats in Nigeria and elsewhere to counsel President Olusegun Obasanjo against succeeding himself in 2007.

He made the point in Abuja on Sunday that African leaders should not go against the spirit of their country's constitutions by extending their tenure illegally.

He did not mention Obasanjo by name but his message was clear.

Kufuor, who has slashed the cost of doing business in Ghana by 10 per cent since 2002, declared: “I am a constitutionalist and if the national constitution has prescribed a term of office, then I would say everyone should work by the spirit and letter of the constitution.”

He advised, however, that since the mode of amendment is provided within constitutions and if, in the wisdom of a nation, the people decide to alter their constitution, it is their right and that should first be pursued.

“Constitutions are made by nations to give guidelines or set the framework within which they must be governed.”

He spoke on corruption and economic reforms in Ghana, saying that a number of legal and institutional changes have been embarked upon to correct the ways that things were done.

Said Kufuor: “The government has done this by passing a law like the Public Procurement Law, which insists that all procurements by the public sector of a certain size in terms of money must get the permission of a Procurement Commission that has been set up, which is composed of some of the best people that know about the processes of corruption.

“And we passed the law called Financial Administrative Act. This also enhances efficiency in public sector financial administration. We got the Internal Audit Act which, for the first time in Ghana's history, is about internal auditing.

“We have a Commission for Human Rights and Administrative Justice in place, which has been working. The interesting thing is that at some point, some members of Parliament alleged that the President had used public money to purchase his private house.

“The lawmakers made this allegation to the commission. The commission wrote to me to respond. I obliged by making my statement and replied to the allegations.

“The commission then sat and invited the members of Parliament to substantiate the allegation over a stretch of time. The allegation wasn't true. I am telling you this story to show that even the President could be summoned to face the commission on allegation of corruption. We are trying to bring corruption to a manageable proportion.”

But Kufuor declared that the imposing Central Bank of Nigeria (CBN) building with 11 floors in Abuja points to what the future of West Africa or indeed Africa would look like.

“What I have seen at the CBN building is giving me reasons of what the Central Bank of West Africa or Africa would be like when we get there. This is truly a state of the art Central Bank. I was even more surprised that every detail of the edifice was done by a Nigerian architect.

“If we can do this sort of thing for ourselves, then I would say that we are, at least, at the threshold of development. We have got the leaders who should be able to usher us into the category of the emerging world.

“For so long we have been told and we have accepted and resigned ourselves to what has come to be known as the Third World or the underdeveloped world. It is high time we broke loose of that and make our way forward.”

He, however, warned that it is not enough to have structures such as the CBN because it is the efficiency and effectiveness of the management within these structures that should encourage the citizens.

Abuja, he noted, is a very functional modern capital that would rate with some of the best anywhere in the world, “and it should make all of us West Africans proud.

“ECOWAS should be a reality and we should realise it as fast as we can. Unfortunately, we have been tagged as a conflict zone on the continent of Africa because of the many political upheavals, coups and civil wars. Hopefully, we are coming to the end of those types.”

Kufuor expressed optimism that Liberia, now coming through with an election, will be a success story and that Cote d'Ivoire, which promises to be a true leader in the sub-region, will scale through its problems hopefully next year.

“Everywhere else will be stabilised so that we put together and realise as quickly as possible the common currency. We want to join our Francophone brothers so that ECOWAS would become the common market.”

CBN Governor, Charles Soludo, had informed him of the determination of the bank to realise the dreams of a modern Central Bank in the world.

“Our vision”, he enthused, “is to have Nigeria and West Africa as the financial hub of Africa. This is what drives us in what we do, both in the conduct of monetary policy, exchange rate and even more so in the banking sector and reforms.

“We are about to complete a revolution that will ensure that the banks in Nigeria are strong and stable not only to be able to play a catalytic role in developing the local economy but also in being a major player in regional and global affairs in Africa.”

Soludo commended Kuffour for having ensured stability in the Ghanaian economy since 2002 when he became President.

Inflation and interest rates are coming down in that country while it experiences growth and transformation, he noted.