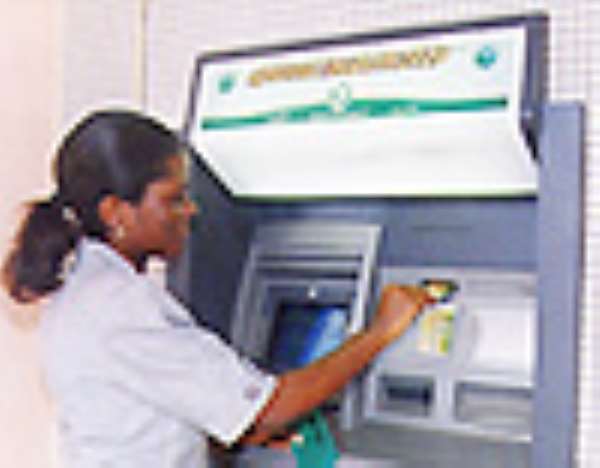 Accra, Nov. 12, GNA - Hundreds of Ghana Commercial Bank (GCB) customers in Accra, who had banked their hopes on using their Automatic Teller Machine (ATM) cards to withdraw money from their accounts on Saturday returned home empty-handed.
The customers, who converged at the High Street branch of the GCB from several ATM locations such as Legon, Korle-Bu, Osu, Circle and Liberty House, looked crest fallen, as the machines could not offer the usual banking services as a result of equipment or technical failure. "I have tried almost all the ATMs in the city and none is working," a worried customer, who refused to disclose his name to the Ghana News Agency.
Another said he had waited for more than two hours at the Korle-Bu branch of the GCB, thinking that the machine was being repaired and would soon be in operation but finally abandoned any idea of transacting business through his ATM, which he waved disappointedly in the air. Some of the customers had apparently used their last money on them to come to the bank only to realise that, they had miscalculated, and had to depend on the goodwill of some Good Samaritans to be able to return home.
One customer remarked: "Is this the bank that says it serves us better?" while another replied wryly: "No, they rather swerve us better".
Unfortunately, there was no official of the bank to tell exactly what had happened to all the ATMs in the Accra Metropolis that has refused to serve the bank's clients.
However, to many GCB customers, the ATMs, which operates for 24 hours, have been found to be very convenient and therefore their preferred mode of transacting business, particularly after the normal banking hours and during the weekends and holidays. Nov. 05