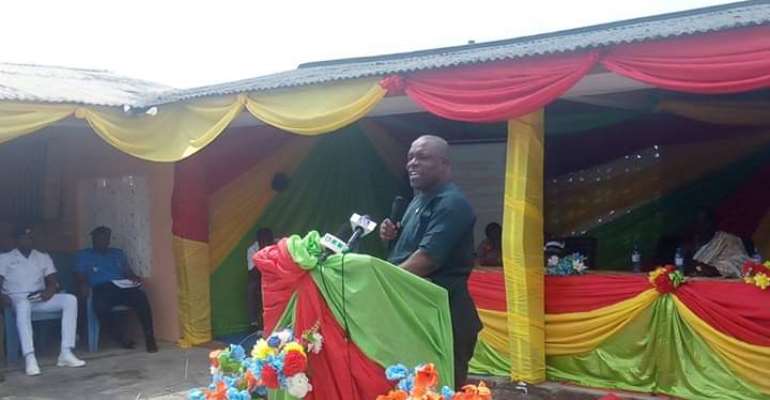 The Jomoro Municipal Assembly in the Western Region has initiated a new programme called Planting for Food and Export for Rural Development to improve economic growth of the people.

The MCE for the area, Mr. Ernest Kofie announced this during the second Town Hall Meeting organised by the Ministry of Information in collaboration with the Jomoro Municipality on Thursday, November 22, 2018 at Tikobo Number One Community.

It was under the theme, "Educating The Populace on Government Policies and Initiatives".

Town Hall Meeting is being organised by the Ministry of Information across the country to explain flagship policies and programmes rolled out by the government to support people to improve local economy.

He said the objective of the programme is to promote rural economic growth and improve household incomes of rural farmers through the provision of certified improved seedlings, extension services, business support and regulatory mechanisms.

He added "To create sustainable raw material base for the industrialization drive through the One District One Factory flagship program (1D1F).

He revealed that the Municipal Assembly has chosen these crops to be cultivated under the program, mangoes, cocoa, rubber, cashew, sheanut and cocoa.

Mr. Kwofie said immediately the Assembly is cultivating cocoa and coconut and promised to cultivate the rest of the crops.

He revealed that under the program, 314 interested farmers have been registered and added the Assembly has secured 96 hectares of land for the cocoa plantation and also 120,000 cocoa seedlings have been distributed to the farmers.

He said the land for the project is situated at Elubo enclave.

Mr. Ernest Kofie announced to the gathering that currently farmers are being sensitized about the benefits of improved hybrid coconut.

He stated that under the program, over 10,000 improved hybrid coconut seedlings would be distributed to farmers in 2019 farming season.

He added that the hybrid coconut would be maturing in three years time when planted.

He, therefore, urged other farmers to embrace the Planting for Food and Export for Rural Development (PERD) programme.

The MCE, Mr. Ernest Kofie revealed to the gathering that the Assembly is developing Artisan Villages at Elubo and Ekpu to boost their works and also generate income for the Assembly.

He emphasized that site for the project at Elubo has been acquired and cleared.

He added "Site at Ekpu has been partly developed, processes are underway to acquire and develop the rest and this project, a hostel facility is being constructed to provide accommodation for some trainees and as a result provide income for the Assembly".

Mr. Ernest Kofie said the town hall meeting had become necessary as part of government's intention to ensure accountability and transparency in administering affairs of the nation.

He acknowledged that the various achievements chalked by his administration over time was due to the collaboration from various stakeholders in the municipality.

The MCE who touched on various development projects including education, agriculture, health, local governance, roads, youth development, hinted that the future of the municipality is bright due to the pace of initiatives to bring development to the doorstep of the people.

Planting for Food and Jobs
Under this programme, the MCE said the programme is an initiative geared towards increasing Food Productivity and Food Security, reducing food imports and modernizing agriculture and make it a source of employment for the teeming youth.

32.6 hectares of land were used for the exercise this year.

"The onion farm at Half Assini and lettuce farm at Nvellenu have employed so many youth and I urge all of us here to embrace it", he said.

Fall Army Worn Control Program
The MCE bemoaned that 190 hectares of maize farms were attacked and added that it were reported in twenty-eight (28) communities.

He revealed "A total of 155.8 hectares were fully recovered through application of free agro chemicals supplied by government. Three pheromone trap have been mounted at Half Assini, Tikobo Number One and Elubo to check the presence of the female moths of the pest".

Another intervention by the Assembly dubbed artificial hand pollination has also led to improvement in the predominantly cocoa growing areas.

SME and Youth Development
The MCE said "Business development programs were ushered for the youth and various SME's in the municipality. A total of 354 persons participated in the training which comprised of 49% females and 51% males".

Under the one District, One Factory (1D1F) initiative, Mr. Kofie said the policy seeks to create economic growth poles that will accelerate the development of the municipal and create jobs for the teeming youth.

He said "Two factory projects have been selected to be implemented in the Municipality and feasibility studies are ongoing. The projects include; Fertilizer Processing Factory at the Dormuli Enclave, Salt Production factory for the manufacture of caustic soda at Anlomatuape".

Under the Youth Employment Agency, the MCE said 376 youth both males and females have been engaged at the various modules.

He added that 269 tertiary graduates have been engaged into the Nation Builders Corps (NaBCO).

"Under the Nation Builders Corps (NaBCO). Two hundred and sixty-nine (269) graduates have been posted to the Municipal for placement by the module implementation partners. The modules by the sectors represent 74% males and 26% females", he explained.

Social Development Initiatives
The MCE revealed that the Assembly supported people living with disabilities with so many equipment and materials worth 123,000 Ghana Cedis this year to improve their living conditions.

"The Assembly has disbursed GHc123,000 to people living with disabilities. The beneficiaries of the funds received equipment and materials that will enable them to generate income", he revealed.

Mr. Ernest Kofie revealed to the gathering that the Assembly is reshaping the Ankasa Forest road to attract tourists to the place and also help farmers living there.

He, therefore, seized the opportunity to appeal to the gathering to rally behind the NPP government and pledged his total commitment to work everybody in the area.

He said "Government has initiated policies, programs and projects to address the socio-economic and environmental challenges confronting the people of Ghana".

He urged the residents to refrain from partisan politics and be united as one people.