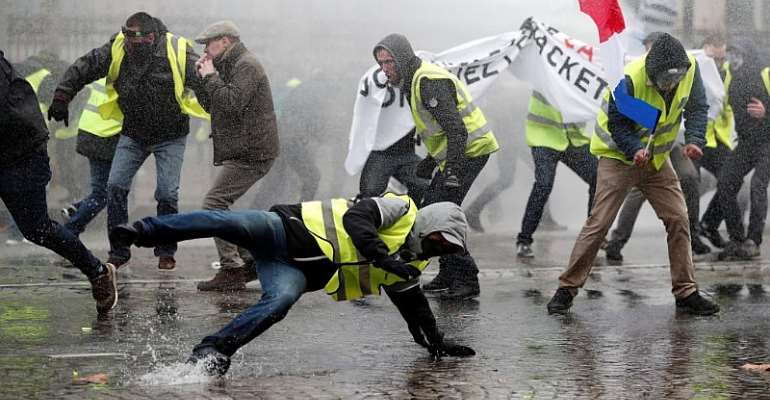 France's Far-right leader Marine Le Pen says she had "never called for any violence", after clashes in Paris between police and Yellow Vest protesters, as she ridiculed Interior Minister Christophe Castaner's accusation that she had called them onto the Champs-Elysées.

The Interior Ministry granted permission for the Yellow Vests, or gilets jaunes to gather on the Champ de Mars, at the foot of the Eiffel Tower, on Saturday, but banned protests in other areas, including the Champs-Elysées and the Place de la Concorde.

Le Pen, leader of the National Rally (formerly National Front), denied she was responsible for some 8,000 Yellow Vests invading the avenue and the ensuing clashes, which saw police fire tear gas as demonstrators set vehicles on fire and threw projectiles, vandalising parts of the avenue.

"I asked the government on Friday why the yellow vests could not demonstrate on the Champs-Elysees," Le Pen told the LCI television channel. "I have obviously never called for any violence whatsoever.

Castaner denounced the clashes on the Champs-Elysees, saying participants in the violence had "responded to the call of Marine Le Pen".

Le Pen rejected Castaner's statement as "outrageous. He behaves lake a small-town politician who wants to take advantage of what is happening.”

MP attacked
Meanwhile, in the southern town of Limoux, a vineyard property belonging to an MP for President Emmanuel Macron's LaREM (La République en Marche) party was overrun by around forty Yellow Vests on Friday night.

Mireille Robert tweeted: “Tonight, 40 men, wearing helmets and balaclava's came into my home, starting a fire and making threats. Forty against one family in a remote estate, what courage! Fled as soon as the police arrived. Such violence is not acceptable."

A police spokesperson said that the forty intruders had asked for a meeting with the MP after firing pallets at the farm, but on the advice of the police this was rejected.

None of the intruders were detained or identified.