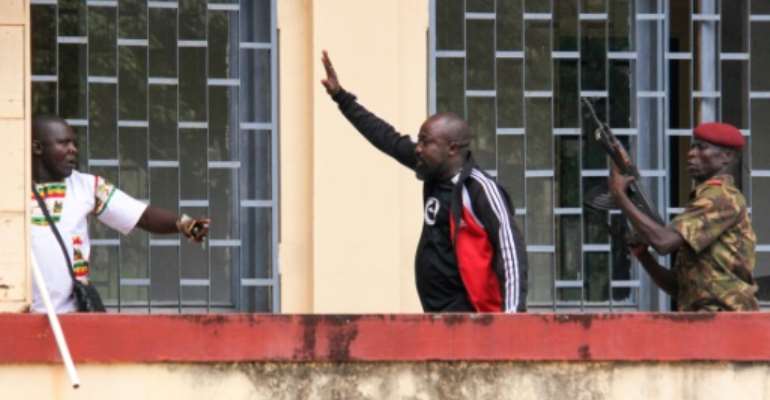 MP Alfred Yekatom, a former militia leader known as "Rambo", was arrested in late October after firing his gun in the air during a parliamentary session in Bangui, Central African Republic's capital. By Gael GRILHOT (AFP/File)

A former militia leader from Central African Republic known as "Colonel Rambo" will for the first time face judges in The Hague Friday on charges of war crimes and crimes against humanity.

Alfred Yekatom, 43, was arrested late last month in the volatile African country and extradited on Saturday to the International Criminal Court in the Netherlands.

Yekatom faces 14 charges for his role in the CAR's bloody unrest, which has pitted Christian and Muslim groups against each other since 2013.

An elected MP since 2016, Yekatom was arrested after he drew his gun and fired into the air in the parliament in Bangui, the capital, during an altercation late last month.

At Friday's hearing, scheduled for 1000 GMT, judges will "verify the identity of the suspect and the language in which he is able to follow the proceedings," the ICC said earlier this week.

"He will be informed of the charges against him," it said in a statement.

The charges include murder, mutilation, torture, cruel treatment and recruiting child soldiers into his so-called anti-Balaka militia group, responsible for attacks on Muslims between December 2013 and August 2014, prosecutors said.

Yekatom was wanted in particular for leading an attack in Bangui on December 5, 2013, when his group armed with guns, grenades and machetes, attacked Muslims in Boeing district, killing between six to 13 civilians.

The group then moved to another location where four Muslims were killed, prosecutors said.

Yekatom had been in prosecutors' sights since 2015 for "engaging in or providing support for acts that undermine the peace, stability or security in the CAR", his ICC arrest warrant said.

But it said the shooting incident in parliament showed "that he resorts to violent acts" and that his arrest was necessary "to prevent him from committing further crimes within the jurisdiction of the court."

Yekatom's transfer is the first since the ICC's chief prosecutor Fatou Bensouda opened a probe in 2014 into the deadly violence that has left thousands dead and forced more than a quarter of the population out of their homes, according to UN figures.

One of the world's poorest nations despite a rich supply of diamonds and uranium, CAR has struggled to recover from a 2013 civil war that erupted when President Francois Bozize, a Christian, was overthrown by mainly Muslim Seleka rebels.

In response, Christians, who account for about 80 percent of the population, organised vigilante units dubbed "anti-Balaka" in reference to the balaka machetes used by Seleka rebels.