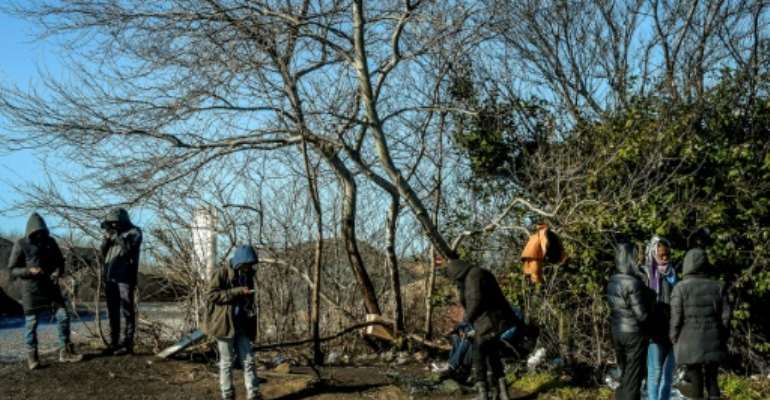 Migrants hoping to reach Britain on a road leading to the Calais harbour in northern France. By PHILIPPE HUGUEN (AFP)

French authorities warned Thursday of a spike in migrants attempting the dangerous crossing of the English Channel by boat to reach Britain, which could reflect fears the border will be shut after Brexit.

"But 17 of those are since October," said Captain Ingrid Parrot, a spokeswoman for the French maritime police based in Cherbourg.

"We're dealing with a situation that's getting worse," she said, adding that France was reinforcing its patrols in the Channel.

Britain's interior ministry said Thursday that 14 people had been rescued overnight, bringing the total number to 78 in the last two weeks.

"We have stepped up deployments of our coastal patrol vessels along the South-East coast in light of recent events," the ministry said.

Migrants have long massed along France's northern coast hoping to stow away on trucks heading for Britain, where many have family or believe they stand a better chance of getting asylum or finding a job.

But starting in 2016, officials began seeing attempts by migrants to use dinghies and inflatable rafts to cross the 33-kilometre (20-mile) Strait of Dover, one of the world's busiest shipping channels.

A total of 23 attempted crossings were reported that year, falling to just 13 in 2017, Parrot said.

But the prospect of Britain's exit from the EU next March, which could lead to tighter controls on immigration, may be pushing more migrants to make an attempt by sea instead of trying to stow away on vehicles in Calais.

"We think they want to leave at all costs now because Brexit hasn't yet happened," Parrot said.

Unseasonably mild weather in October may also be a factor in the recent increase, while security has also been progressively stepped up around the ports, making stowing away on trucks increasingly difficult.

At around 2:00 am (0100 GMT) Thursday a tugboat spotted an inflatable raft carrying six men and a woman and escorted them toward England, where it was intercepted by Britain's Border Force some five kilometres off the coast.

About an hour later, a ferry alerted authorities to another dhingy in distress after its motor broke down, with 11 people on board.

French authorities were unable to establish communications and locate their precise location initially. They were later spotted by a navy helicopter and picked up by a French patrol boat.

"Four of them were suffering from hypothermia and transferred to the Calais hospital," the authorities said in a statement, while the others were handed over to border police.

Last week a group of 17 Iranian migrants stole a fishing boat from a French port and managed to reach the harbour at Dover, a feat Parrot described as "unprecedented" since much smaller vessels are usually used.

Britain's interior ministry said all 78 people rescued since November 9 -- including 24 people intercepted in three incidents on one day last week -- also claimed to be Iranian.

The attempted crossings are especially risky given the heavy boat traffic in the Channel, sustained high winds and extremely cold water.

"Nobody should put their life at risk attempting to smuggle themselves into the UK across the Channel," the British foreign ministry said, adding that such attempts remain "relatively rare."

But so far no migrant drownings have been reported since 2016, Parrot said.

"Our biggest fear is a collision with a bigger boat," she said.