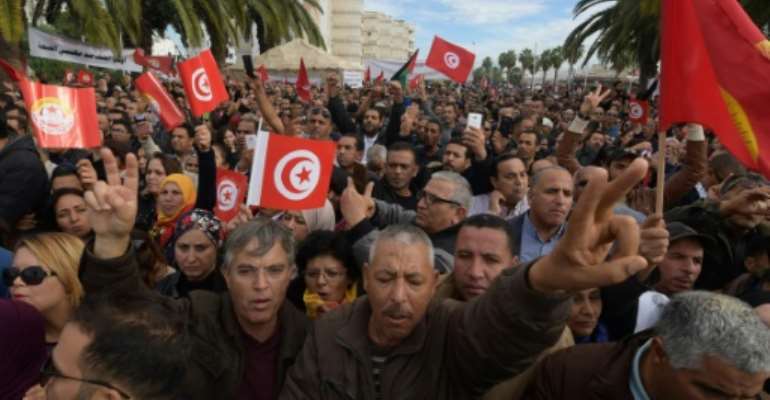 Tunisians protest in the capital Tunis during a general strike by civil servants on November 22, 2018. By FETHI BELAID (AFP)

Tunisian civil servants staged the biggest general strike in five years on Thursday after their powerful trade union failed to secure wage hikes in tense negotiations with the government.

More than 3,000 people gathered outside parliament, responding to calls from the Tunisian General Labour Union (UGTT) for demonstrations.

"The wage increase is not a favour" and "Tunisia is not for sale", protesters chanted, also employing a popular slogan of the country's 2011 revolution -- "work, freedom, national dignity".

The UGTT is demanding 673,000 state employees receive salary bumps equal to those granted this year to public companies, which range from 15 to 30 euros ($17-34) a month.

Bouali Mbarki, UGTT deputy secretary, told AFP the wage increase "had not been taken into account in the 2019 state budget".

Thursday's strike, the biggest since 2013 and the first civil servant walkout over wages in decades, according to UGTT, included staff from ministries, hospitals and public schools.

The demands for wage hikes are tied to "an unprecedented rise in prices, a deterioration of citizen purchasing power.... and a degradation of daily life," Mbarki said.

Donors keeping Tunisia afloat have called on the government to control civil service salaries to avoid pushing up the public deficit.

But Mbarki said the government "must find a solution without being subjected to the instructions of the International Monetary Fund (IMF)-- even if it has made commitments with it -- and preserve social stability".

Mbarki said the union was "not negotiating with (head of the IMF) Christine Lagarde) but with the head of the Tunisian government", Prime Minister Youssef Chahed.

The North African country is seen as having had a relatively smooth democratic transition since the January 14, 2011 toppling of President Zine El Abidine Ben Ali after 23 years in power.

At the same time price hikes, fuelled in particular by the fall of the Tunisian dinar, combined with tax increases and stubborn unemployment have spurred social discontent that escalated into riots across several cities in January.

In 2016, the IMF granted the North African country a 2.4-billion-euro loan over the span of four years in exchange for a promise to carry out economic reforms.

In recent months, political life in Tunisia has been paralysed by power struggles ahead of presidential elections set for 2019.