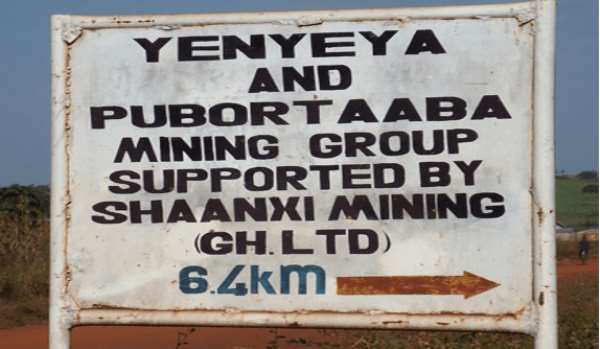 The tension building up in the Talensi District in the Upper East as a result of the ‘turf war’ between the local Small Scale Miners and an ‘illegal’ Chinese mining company called Shaanxi has hit its crescendo as the local residents resolve to stand up against the use of police to drive them away from their concessions.

Last Monday the residents ambushed and assaulted two police officers in an attempt to free their colleagues arrested by the police who are stationed at the Chinese mining site.

Acting upon the orders of the Chinese, the police swooped-in on a mining site in Gbane, a town within the Talensi District and arrested 10 guys on the allegation that the site forms part of Shaanxi’s own concession but this claim has been refuted vehemently by some of the indigenes who spoke to this reporter saying; “the Chinese are rather influencing the police and using them against their own people and we are going to resist this kind of oppression in our own land”

Per the records, Shaanxi Ghana Mining Company came to Talensi merely as a Mining Support Service provider to some two small scale mining companies in Gbane namely Yenyeya and Pubortaaba Mining Groups. But under the pretext of providing mining support services to these two companies, Shaanxi has illegally veered into large scale mining without any license of the sort in the full glare of the Ministry of Lands and Natural Resources(MLNR) and the Minerals Commission whiles the Chinese cart away tons of gold worth many millions of dollars.

In an interview with one of the opinion leaders in Gbane (name witheld), he expressed worry about how the police is backing these Chinese whilst their very nefarious activities are killing the indigenes on a regular basis.

According to him, “because of the nature of Shaanxi’s deep shaft mining, when they go underground they veer into the concession of the indigenes and that is when the clashes occur as happened last Monday. The Chinese have used all kinds of crude methods to dispossess the indigenes of their own concessions and in the process 29 indigenes have been officially reported dead over the period Shaanxi has been in operation in Gbane”.

He said, “I don’t know what is wrong but even last year when government suspended the operations of Shaanxi to allow for thorough investigations into the company’s underground operations and the death of some seven miners in the area at the time, the Chinese were still operating with impunity with the protection of the Ghana police stationed on their site”.

The Chairman of the Small Scale Miners Association in that area Mr. Robert Tampoare also affirmed this assertion in an interview that in spite of the ban on small scale mining the Chinese are still operating under the protection of the police and trespassing into other miners’ concession with impunity and the Minerals Commission would not be bothered though they have made several reports to the Commission in that regard.

He cited for example that in 2014 the Unique Mining Group(small scale) made official complaint to the Minerals Commission over Shaanxi’s trespassing on their concession upon which a team of investigators were constituted comprising of Technical and mining Inspectors from the Commission, one geologist and two surveyors from Unique Mining as well as the Chinese own five member technical team and it turned out that the Chinese(Shaanxi) has actually trespassed and entered 208.91 feet into Unique’s concession and the Commission has done nothing about it in terms of Unique’s request for compensation.

He added that a similar case of trespass was cited by Obuasi Mining Group and Gbaniganyire Group against Shaanxi in February 2016 and reported to the Minerals Commission but “as we speak nothing has been done about it so it’s no surprise that the indigenes have resolved to defend their rights and territory in the manner as happened last Monday”.

In a separate interview with the Regional Police Commander of the Upper East, ACP Ampofo Duku, he admitted that the 10 guys who were arrested by the Talensi district police on Monday night were never granted the right to bail, detained in police custody for three days until they were sent to court last Thursday, convicted and fined Gh¢2,800 in total.

ACP Duku also admitted that “yes we have a police post on the Shaanxi site and we provide them day and night protection but the number of men there are not up to 19 as speculated”.

Per the police Commander’s own account of how the guys were refused the right to bail and subsequently securing conviction against them in court is quite indicative and telling of how powerful the Chinese are in that foreign land.

In the coming few days, this newspaper will be giving you a blow by blow account of how Shaanxi is trespassing or entering into the concession areas of other foreign companies within that enclave with impunity. We will also serve you with the jaw dropping and staggering values and figures of how much gold Shaanxi has already exported illegally per their own official records presented to the Minerals Commission whilst Ghana chase for three billion dollar loan from China.