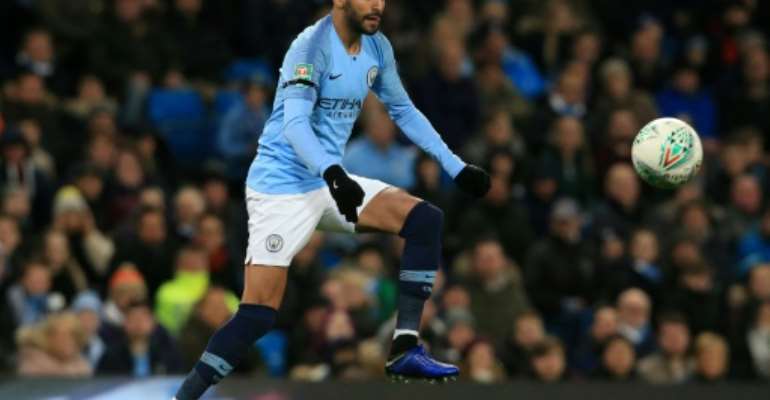 Algeria qualified for the Africa Cup of Nations in their most recent game against Togo with the help of Riyad Mahrez, pictured here playing for Manchester City in November 2018. By Lindsey PARNABY (AFP/File)

Manchester City star Riyad Mahrez scored twice as Algeria trounced Togo 4-1 in Lome on Sunday to qualify for the 2019 Africa Cup of Nations finals in Cameroon.

Mahrez netted either side of a Youcef Attal goal to give the 1990 champions a three-goal advantage within 30 minutes in the west African city.

Kodjo Fo-Doh Laba pulled one back for Togo in the second half before Baghdad Bounedjah completed the scoring during stoppage-time.

Algeria have 10 points from five matches in Group D, Benin seven and Togo and the Gambia five each. The final round of matches is scheduled for March.

Burkina Faso, Tanzania, the Democratic Republic of Congo and Zimbabwe squandered chances to also secure places in the newly-expanded 24-team tournament next June and July.

Mateus bagged a brace for Angola in a 2-1 Group I win over Burkina Faso in Luanda while Tanzania fell 1-0 in Lesotho, where Nkau Lerotholi nodded the 76th-minute Group L winner.

William Jebor netted in the second half as Liberia upset Group G leaders Zimbabwe 1-0 in Paynesville while Congo and Democratic Republic of Congo drew 1-1 in the same mini-league.

Zimbabwe have eight points, Liberia seven, DR Congo six and Congo five and all four countries can be among the top-two finishers and qualify.

Former champions Zambia were eliminated after a 1-0 away loss to Mozambique in Group K.

Albania-based Reginaldo Faife kept Mozambican hopes alive of a top-two finish by scoring the only goal after 63 minutes in Maputo.

Guinea-Bissau and Namibia have eight points each after a 0-0 draw in Windhoek on Saturday, Mozambique seven and Zambia four.

Zambia were shock winners of the 2012 Cup of Nations in Libreville, edging the Ivory Coast on penalties after a goalless final.

Defeat was a huge blow for Belgian-born Zambia coach Sven Vandenbroeck, who was hired when local Wedson Nyirenda resigned after the opening round to join a South African club.

Vandenbroeck has won one match, drawn one and lost two in the Cup of Nations since his first appointment as a national team head coach.

He assisted compatriot and Cameroon coach Hugo Broos when the central African country surprisingly won the 2017 Cup of Nations in Gabon.

Ghana defeated Ethiopia 2-0 in Group F in Addis Ababa with recalled Jordan Ayew scoring twice during the first half.

Sudan ended a four-match losing run in Group A with a surprise 3-1 victory over already-qualified Madagascar in Antananarivo.

A stoppage-time goal salvaged a 2-2 Group H draw for the Central African Republic in Rwanda while Niger came from behind to win 2-1 away to Swaziland in Group J.