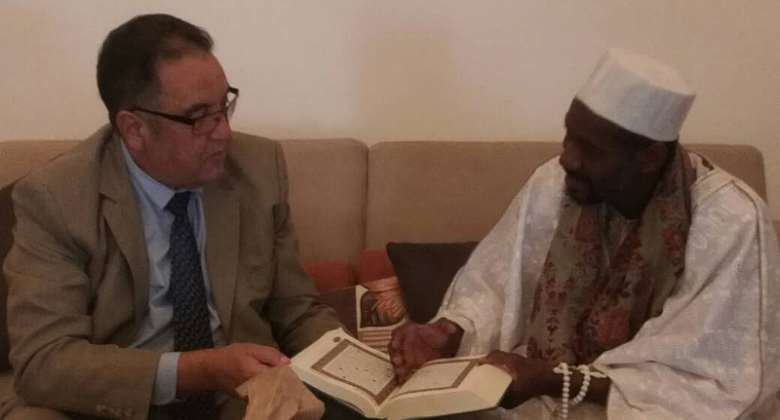 The long-standing mutual cooperation between the TIJANIYYA Muslim Council of Ghana (TMCG) and the Embassy of the Kingdom of Morocco was re-energised in a meeting at the residence of the Ambassador.

The meeting was made possible as a result of the President and Sipiritual Leader of TMCG led delegation to pay a courtesy call on the new ambassador.

The two annual programmes are the recitation of Holy Qur'an for peace and tranquility to prevail in the country. Last but not the least the celebration of the life of the initiatot of world Tijaniya,Sheikh Ahmed Tijaniya.

The PRO Abubakar Baban Yara made mention of the great work of the President and Spiritual Leader of Tijaniya is doing for Islam and Tijaniya. Among the hard work is the combing of the length and breath of this country and beyond winning souls for Islam and Tijaniya.He pointed at countless occasion where his eminence converted people into the Deen and Tariqa.

On his part, Ambassador H E Mohammed Farahat and commended the great work Sheikh Khalifa and the Council are doing Islam and Tariqa Tijaniya and promise to work hand in hand with them to complement their efforts.

The Supreme Leader of Tijaniya Sheikh Abul-Faidi Abdulai Ahmed Milano Jallo expresses his gratitude to the ambassador for having time out of his busy schedule to interact with him and his delegation. He praises the long standing relationship between the two entities grows fom strebgth to strrength.

The leader prays that the coming of the new Ambassador will add more value to his and the counvils work of propagating Islam and Tijaniya in this country and beyond.At the meeting was Mohammed Aminu.of the embassy of the of Morocco.