“Let’s Buy Peace At The Price Of War” – Ameyibor 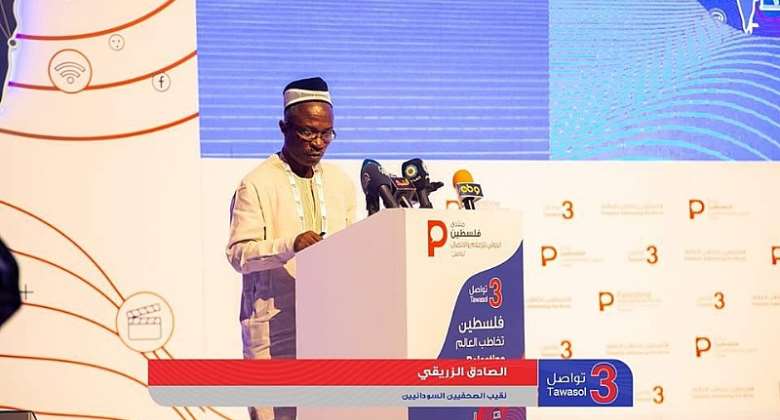 Istanbul, Turkey, Nov. 18, – Mr Francis Ameyibor, a Deputy News Editor, Ghana News Agency has appealed to the international community to commit to “buy peace at the price of war,” in the Palestinian and Israeli conflict.

He said the price of war is expensive in terms of lost of human lives, destruction of properties, creation of internal and external refugees, permanent emotional, psychological, spiritual trauma and months spent in strategizing as well as huge funds that are invested in arms and ammunitions.

“If the world body spend just about 60 per cent of the total investment for war into peace building initiatives, we would attain peace in the protracted Palestinian/Israeli conflict,” Mr Ameyibor stated during the opening ceremony of the Palestine International Forum for Media and Communication’s third biennial conference (TAWASUL III) in Istanbul, Turkey.

The conference on the theme: “Palestine Addressing the World,” is being attended by more than 700 participants: journalists, writers, head of newspapers, radio, and television stations, correspondents, photographers as well as several prominent intellectuals and public figures from over 60 countries around the world.

Speaking on the “Palestinian struggle: Perspective from afar,” Mr Ameyibor noted that in Africa especially the Christian dominated communities the narrative is that “The struggle is a Biblical fight against the Israelis to deprive them of their divinely gifted lands”.

He said: “It is important that everybody is assisted through neutral media mediums to have a full grasp of the historical facts about the conflict. This I strongly believe is vital to captivate global attention and get all to show genuine commitment towards finding a workable and peaceful solution”.

Mr Ameyibor, noted that the Palestinian Media Forum, could play a vital role in aiding journalists across the world to appreciate the real facts without offending the sensitivities of any religion; “the world needs free, fair, balance, and accurate reportage on the conflict to make an informed decision”.

He reminder media practitioners that: “we have the power to preach peace or ignite conflict and war. The words we speak on radio, and television, what we write online, in the newspapers and other social media platforms as well as the pictures which accompany these stories set in motion reaction or inaction in our targeted audience.

“What do we want as media practitioners, global peace or global war, let’s commit to buy peace at the price of war”.

Mr Hisham Qassim, Secretary-General of the Palestinian Media Forum, in his welcoming remarks said the conference aims to mobilize efforts of media people to defend the Palestinian cause.

Mr Qassim decried ongoing Israeli violations against journalists and media organizations in the Palestinian territories, the latest of which according to him was the bombing of the headquarters of Al-Aqsa television in the Gaza Strip.

He claimed that, Israeli warplanes fired at least ten missiles at the Hamas-run Al-Aqsa television, destroying its building completely and “since late March this year, more than 200 Palestinians have been killed and thousands more injured by Israeli army fire during anti-occupation protests near border of the Gaza Strip”.

Mr Bilal Khalil, Director of the Palestinian Media Forum explained that: “We are here in Istanbul to bring worldwide media organizations together to raise awareness about the Palestinian cause.

“Our big aim is to raise awareness on the universality of the Palestinian cause and create a networking platform for media professionals from all over the world”.

The TAWASUL III is a specialized conference which seeks to open wide horizons for dialogue regarding the various media issues related to the Palestinian cause.

It also seeks to provide an opportunity to discuss such issues objectively and professionally in an attempt to form a true image of the Palestinian cause in the international media.

Topics discussed includes: developing the global media discourse; what mechanisms can help develop the media discourse; strategies to confront the discriminatory discourse; addressing normalization in the Arab media; and what are the tools necessary for a global digital discourse.

Alongside TAWASUL III, there would be a training seminar topics such as: field correspondent in conflict and warfare; writing for pictures; data journalism; making walk and talk reports; building supportive media advocacy groups; and deception in digital media.