‘Water For All’ Agenda Rolled Out 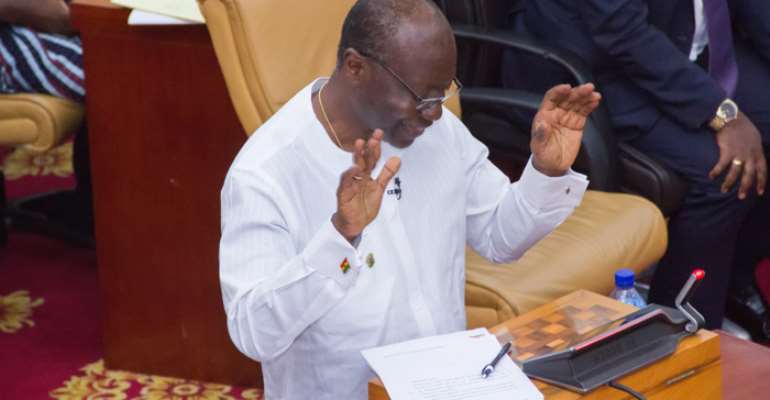 Government says it will ensure the continuous expansion of urban water systems in the country under its “Water for All” agenda.

Finance Minister Ken Ofori-Atta, who stated this during the presentation of the 2019 Budget to Parliament yesterday in Accra, said “in 2019 government will lay 190 km of pipelines across the country. We will also construct nine water systems each in the Northern Region and Central Regions, five in Brong-Ahafo Region and two in the Upper West Region.

Port expansion
He said as part of the overall strategy to position Ghana as a transport and logistics hub, government will continue to develop the port infrastructure through the construction of new container terminals at the Tema Port to increase container handling capacity, provide additional berths, reduce waiting time and ensure quick access to the port.

“The first berth with a depth weight capacity of 16.0 metre is 42 percent complete and is scheduled to be operational by 2019.”

“To develop the Takoradi Port as an oil and gas hub, government commenced the development and operation of an on-dock container multi-purpose terminal with a container quay of 16-metre draft to accommodate bigger vessels. The first phase of the Dry Bulk Jetty which involves the construction of the 600m quay wall is completed. The second phase of an additional 200m quay wall will commence in 2019.”

Fishing port
Government, he averred, has completed the first phase of the Elmina Fishing Port Rehabilitation and Expansion project which includes upgrading the existing fishing port, as well as the construction of a new port with a basin area and a quay wall for vessels to moor and offload.

The second phase of the project, which will commence in 2019 will entail the construction new facilities such as shed for the fish market and the construction of a new slipway for bigger vessels, with a boat refurbishment area.

Airports
“The Ministry commenced work on the Kumasi Airport Phase II Project to upgrade it to a real international airport. The works include extension of the runway from the current 1,981 metres to 2,300 metres, construction of new terminal building to handle 1 million passengers per year and other ancillary works. The project is expected to be 30 percent complete by the end of 2018. Implementation will continue in 2019.

“Work on Tamale Airport Phase II received regulatory approvals for the construction of a new Terminal building and will serve the Sahelian region. In 2019, the contract agreement will be finalised, and construction works commenced. The project is expected to be 65 percent complete by the end of 2019.

National airline
“Cabinet has given approval for the establishment of a home-based airline with private sector participation to provide regional and inter-continental services for efficient movement of people, goods and services, as well as promote tourism. Strategic investors will be engaged, and the airline is expected to commence operations in 2019.

Health
The Finance Minister also said government had received Parliamentary approval for a US$50 million loan to complete Phase II of the University of Ghana Medical School, which is awaiting the conclusion of a value for money audit.

“It has also converted the Ho Regional Hospital to a teaching hospital; commenced the process for upgrading the Hohoe Municipal Hospital to a Regional Hospital; would construct a total of 15 CHPS compounds -two in Greater Accra Region, five in Brong-Ahafo Region, two in Ashanti Region, three in Eastern Region, and will construct 1 District Hospital and five Polyclinics in Western Region and equip four selected facilities at Aburi, Kyebi, Atibie and Mampong.

“Structural work on the new 500-bed military hospital at Afari, near Kumasi, is about 65 percent complete, and full completion expected in 2019. In 2019, work will also start on the 3rd phase of the 37 Military Hospital project in Accra.”