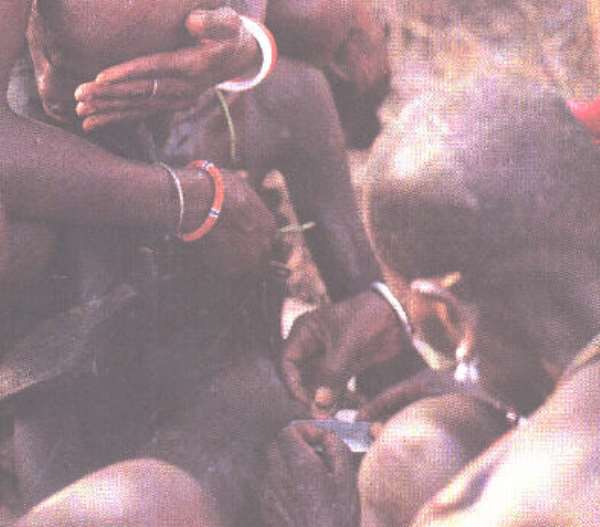 MALE circumcision may dramatically reduce chances of contracting the HIV infection, a groundbreaking scientific survey has suggested. Of over 3,000 men included in the recent study, carried out by the French National Agency for AIDS Research, those who underwent circumcision were 60 percent less likely to contract the HIV virus than those who did not – a level of protection twice that of the 30 percent risk reduction set as a target for an AIDS vaccine.

In fact, the correlation between circumcision and some level of HIV protection was apparently so strong that the trials were brought to a premature end; it was deemed unethical to continue after an early peak in data showed that uncircumcised men were so much more likely to become infected with HIV after sexual intercourse with women than those who had been circumcised.

The team of scientists, led by Bertran Auvert, tested 3,274 HIV-negative, uncircumcised men aged 18-24 in South Africa's Guateng province, where 32 percent of adults are infected. Half of the men were randomly assigned to be circumcised, and the other half served as a control group, remaining uncircumcised.

The study was a randomised, controlled clinical trial, and the first such survey to test circumcision as an active intervention in the transmission of HIV. At the end of the trial, researchers registered 69 HIV cases – only 18 of them were in the men who were circumcised at the start.

“It shows that the intervention (circumcision) prevented between six and seven out of 10 possible infections,” said Auvert, qualifying the results by pointing out that although the protection rate was high it was only partial.

He said the results were consistent with earlier simple observational studies in some African countries and India, which point to the fact that the regions of Africa most troubled with HIV infection tend to overlap with the regions where male circumcision is rare.

In Ghana, where circumcision has turned into an almost universal practice, 3.1 percent of the adult population are HIV-positive; a percentage which actually dropped for the first time this year. Even traditional tribal taboos surrounding the practice – the Akan have a rule that no one who has a scar can be elected a chief – have been waning, as circumcision has increasingly become a practice which cuts across ancient ideas and ethnic groups.

HIV infection rates remain below 5 percent in most of West Africa and other parts of the continent where circumcision is commonplace.

Adult infection rates above 30 percent are found in Zimbabwe, Botswana, Swaziland and eastern South Africa, on the other hand, where circumcision is not practised. Swaziland has the highest rate of HIV infection in the world, with a terrifying 42.6 percent of the adult population sentenced by the disease.

The possible protection circumcision provides against HIV and other sexually transmitted diseases may now see the practice being more widely practiced across the entire continent. The hope is that, lacking a vaccine, the nearly five million new HIV infections occurring each year could be slowed by circumcision, the surgical removal of the foreskin.

Laboratory studies have found that the foreskin is rich in white blood cells, which are favoured targets of HIV, the virus that causes AIDS. It is also thought that the pouch or flap at the tip of the uncircumcised penis can harbour the virus, giving it enough time to either penetrate the blood stream of the person, or make him infect a woman easily.

However medical experts have cautioned that the relationship between circumcision and HIV protection is still unproven, and that an apparent correlation should not be seen as a necessary causation.

Dr Nii Akwei Addo, of the National Aids/STI Control Programme in Ghana, told The Statesman that the link between circumcision and HIV transmission has been known for a long time. He described the latest study as a “me too study”, with scientists keen to prove a relationship which is already widely accepted by much of the medical community.

“Whether it is due to circumcision itself, however, or just better personal hygiene more generally, is unclear,” he cautioned.

He said that whilst there is a growing body of evidence to suggest that circumcision may offer some level of protection against HIV and other STIs, condoms are the only proven effective method of avoiding infection. The United Nations AIDS agency has also issued a statement calling for more research into male circumcision. Two more studies now underway in Uganda and Kenya will provide more evidence, UNAIDS said, which they hope may corroborate the results.

The World Health Organisation said it was working on guidelines for qualified medical personnel to conduct safe circumcision as demand for the operation may soon increase.

Health officials said they were concerned that such demand may increase the number of operations carried out by healers and witch-doctors, which could boost the risk of HIV infection rather than prevent it if they were not done correctly.