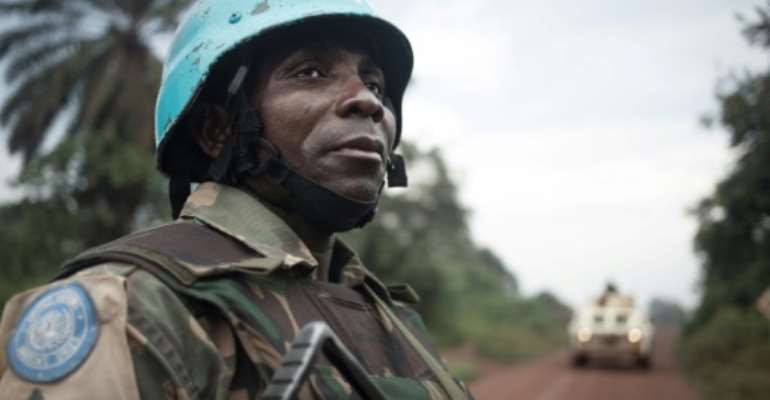 France, Russia and the United States are struggling to overcome differences at the UN Security Council on renewing the mandate of the MINUSCA peacekeeping force in the Central African Republic. By FLORENT VERGNES (AFP/File)

Russia warned France on Thursday that it must put aside "parochial national interests" and recognize its peace efforts in the Central African Republic as negotiations continued on a contentious UN Security Council resolution.

France has presented a draft resolution that takes aim at recent Russian efforts to broker peace deals in CAR by specifying that an African-led initiative is "the only framework" for a solution.

"We are pro-actively helping the CAR, knowingly with the support of the people and we would like our efforts to be duly reflected in the French draft," Russian Deputy Ambassador Dmitry Polyanski told the council.

"In the CAR, there will be work for all to genuinely help the country get back on our feet," he said, adding that it was time to "set aside historical complexes, egotism and parochial national interests."

Working with Sudan, Russia in August convened talks in Khartoum of Central African militias who signed a preliminary agreement, drawing criticism from France of unhelpful meddling in its former colony.

Russia has sent military trainers and equipment to the Central African Republic, and a security adviser is working with President Faustin-Archange Touadera, under a bilateral agreement.

French diplomats and some UN officials have complained that the Russian peace initiative has complicated diplomatic efforts, sending mixed messages to the parties.

"There must be no ambiguity about the central role of the African Union initiative, as asserted in our draft resolution," French Ambassador Francois Delattre told the council.

The Central African Republic is struggling to recover from the bloodletting that exploded in 2013 after the ouster of leader Francois Bozize, a Christian, by mainly Muslim Seleka rebels.

Touadera controls only a fraction of the country, most of which is overrun by militants who claim to protect either the Christian or Muslim communities.

France also faced objections from the United States over a plan for UN peacekeepers in CAR to support newly-trained national forces as they deploy across the war-scarred country.

But agreement was reached over language that specifies that the new task given to the MINUSCA peacekeeping mission will not lead to additional costs.

The Security Council unanimously voted to extend for a month MINUSCA's mandate. The mandate was due to expire at midnight Thursday.

A new vote will be held before December 15.

Delattre said he hoped to win unanimous backing for the draft resolution to shore up peace efforts in the Central African Republic.