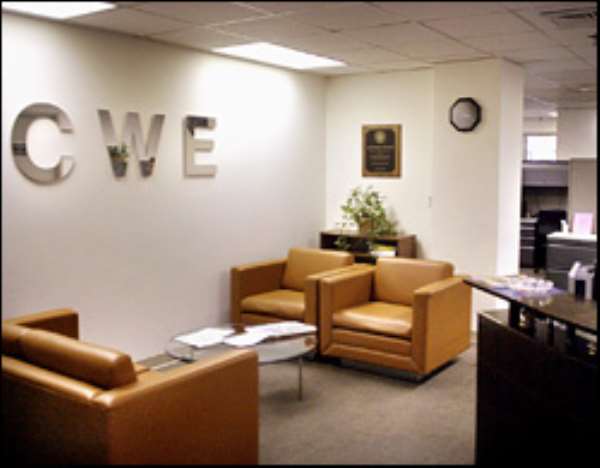 . . . Suspected of stealing Millions from worker-training group This fall, a top official at the city's largest job-training organization quietly told co-workers that he had terminal cancer and only months to live. The news hit Osei Boateng's colleagues at the Consortium for Worker Education especially hard. Boateng, a native of Ghana, was just 36 years old with a wife and young children. A former state assembly aide with an MBA, Boateng had worked at the nonprofit group for a decade and had risen to become chief financial officer. Thanks to its backing by many of New York's largest unions, the Consortium carries heavy political clout in Albany, City Hall, and even Congress. Once closely aligned with the Giuliani administration, the group played a major role in the city's welfare-to-work programs. Over the past six years, Boateng helped the organization win more than $300 million in government contracts to train blue-collar workers ranging from bakers to hospital employees. He had also overseen a much praised effort to aid workers and businesses devastated by 9-11, using $32 million specially allocated by Congress. He'd only recently finished a painful restructuring of the organization after that funding was exhausted. Boateng said his ailment was incurable liver cancer, the result of untreated hepatitis C that he'd contracted as a youth. Conventional treatment wouldn't help, he said. Instead, he was moving to Canada, where he intended to try holistic remedies. Up until then, he'd confided his illness only to Dr. Frank Madera, a close friend who headed the group's health-care- training programs. It's true, Madera confirmed. He'd accompanied Boateng to every specialist. There was no hope. Amid tearful goodbyes, Boateng departed. A few days later, CWE officials went looking for an overdue $100,000 payment they'd been awaiting. The money had been paid, officials were told, and the canceled check showed that it had been negotiated through a Brooklyn bank account the Consortium didn't know it had. Moreover, it was just one of several six-figure checks intended for the group that had cleared the account within recent weeks. Alarmed, officials began digging. They quickly identified hundreds of thousands more in missing payments. They called their lawyer who immediately called the D. A.

Today, the Consortium for Worker Education estimates that at least $2.7 million has been stolen. The office of Manhattan District Attorney Robert Morgenthau, which is investigating the embezzlement, believes the figure could be higher, possibly as much as $6 million. Much of the missing money was apparently funneled through 10 bogus vendors that had signed contracts to provide services for Madera's health care programs and had been approved by Boateng, CWE officials found. In one instance, more than $350,000 went to a phony medical supply firm in Atlanta. Still more money was stolen via phantom employees whose time sheets Boateng had apparently approved.

Despite his claim to be headed for Canada, Boateng, whose family is prominent in Ghana, was arrested last month at his Brooklyn home. Charged with grand larceny, he did not request hospitalization or special medical treatment at his arraignment. He is currently being held at Rikers Island as a flight risk. His attorney, David Ruck, did not respond to calls.

Madera, who also comes from a politically influential family, in the Dominican Republic, has not been charged. But shortly after the D.A. entered the case, the Consortium suspended him without pay and locked him out of his office. "I know of no allegations against my client," said his attorney, Jeffrey Rubin.

CWE executives declined comment about the events but a lawyer for the organization said officials there were stunned. "Two seemingly high-class and well- respected guys appear to have dreamed up a scheme that victimized CWE," said attorney Andrew Fisher. "We reported it immediately to the district attorney, and we're optimistic that all of the persons involved have been identified to the authorities and the problem is behind us."

But the powerful organization is still scrambling to explain the problem to the local, state, and federal agencies that fund it. Although the organization is audited annually by an outside firm, no one noticed the missing funds despite evidence that the embezzlement was carried out over the past six years.

Since Boateng was the final authority on the group's finances, the auditors wouldn't have detected it, Fisher suggested. "The very person who would be relied upon to verify expenses was the one apparently perpetrating the fraud," he said.

If so, the training group wouldn't be the first organization to be so victimized. Last month, a once trusted Merrill Lynch trader admitted taking $43 million under the very noses of his bosses. But what makes the CWE episode stand out isn't so much the size of its loss, but its high-level political connections on both sides of the aisle. Those ties have helped make CWE the city's most formidable player in the business of training and retraining workers in a time of near-constant layoffs in blue-collar industries

Ever since it was started by former Teamsters union leader Barry Feinstein in 1985, the Consortium has been a kind of 800-pound gorilla among job-training groups. Feinstein recruited the city's top labor leaders to serve on its board. Current members include Edward Malloy, the president of the city's muscular Building and Construction Trades Council, and Edgar Romney, the regional director of the merged garment and hotel workers' union, UNITE HERE. Much of its funding over the years has been in the form of direct allocations by top state legislative leaders. In turn, the organization has managed a network of education and training programs for the 1 million members of the city's Central Labor Council and, with public funding, operated seven local centers for unemployed New Yorkers to receive help.

Feinstein brought his own bipartisan political connections to the group (in the 1980s, he endorsed both Republican Al D'Amato for Senate and Democrat Jesse Jackson for president). Originally appointed to the Metropolitan Transportation Authority by Democrat Mario Cuomo, Feinstein won a rare reappointment from Governor Pataki even after his ouster from the Teamsters for living too high off members' dues. The pro-labor CWE prospered during the Giuliani administration when it agreed to take on job-training efforts as part of the former mayor's welfare programs, establishing a so-called "one-stop" job office in Jamaica, Queens.

Immediately after the collapse of the World Trade Center, CWE executive director Joe McDermott, a former Feinstein aide at municipal workers' Local 237, gave a forceful speech to an emergency meeting of government, business, and labor leaders. McDermott urged collective action to help the estimated 100,000 workers displaced by the disaster. The resulting massive congressional funding helped CWE create 7,000 new jobs, provide aid to 300 small businesses, and train another 8,000 New Yorkers, according to a report issued last year by the group.

David Jason Fischer, who has studied training programs for the Center for an Urban Future, said CWE was a key player. "The Consortium played an important role in the city's workforce system, particularly after September 11," he said. "At the time, they were the only provider with anywhere close to the capacity and connections to meet the need. They did a lot of good in making job placements and showing that a clear system and strategy of how to provide employment services had value."

Although its role has diminished somewhat since the 9-11 funding was used up, CWE still claims to serve more than 100,000 workers annually. But it hasn't been without headaches. For a union-allied group, the organization has had decidedly contentious relations with the United Federation of Teachers chapter that represents its instructors. Contract talks have been bitter and protracted; teachers once even invaded the office of CWE's chief labor negotiator. In a flyer distributed to UFT members last year, the union also questioned the accuracy of CWE's financial statements, suggesting that more than $1 million was unaccounted for. Consortium officials responded that the union misunderstood the report.

Another headache was the testimony last year at the federal corruption trial of former state labor commissioner James McGowan, who was convicted of trying to steer contracts to a pal who ran a for-profit driver-training school. According to witnesses at the trial, McGowan met with CWE officials and later pushed for the Consortium to obtain a welfare-to-work contract so that it could give a subcontract to his friend's firm. The contract was never awarded, and no allegations of wrongdoing were leveled against CWE.

In scrutinizing the money trail leading to Boateng, CWE learned that its financial officer had been busy with his own side businesses. He and Madera, officials found, ran a prepaid phone card company. They also had an enterprise in which they bought junked cars and shipped them to Ghana to be repaired and sold. In New York, however, Boateng's ride was top drawer: He drove a 2003 Hummer. He is due to face a hearing this Thursday in Manhattan Supreme Court