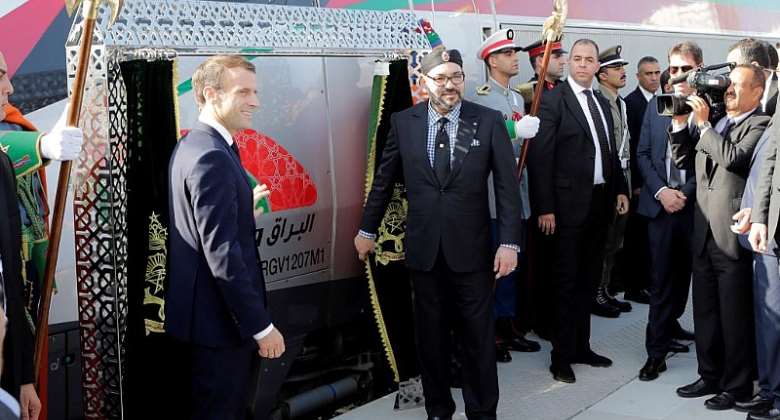 Morocco unveiled Africa's first ever high-speed rail line Thursday with King Mohamed VI and French President Emmanuel Macron attending the ceremony The 1.7 billion-euro project is part of efforts to modernise the kingdom. But a government crackdown on protests in the Rif region casts a pall over the progressive image.

The new service between Tangiers and Casablanca , via the capital Rabat, will slash journey times from five to just over two hours.

Morocco's leaders have heralded the project as a key step in modernising the country's infrastructure.

This is of primary concern, following last month's train crash that killed four people and injured dozens others.

but not everybody is impressed.
"We are buying a high-speed line, so the rest of the world will say Morocco is a very modern country," comments Karima Nadir, a publisher and activist.

"We need to fix the infrastructure for the normal trains first. We need public transport in a decent state, we need hospitals, schools, jobs."

Rif protesters jailed
Demands for jobs and economic development have rocked the country's northern Rif region since last year. In June 2017 a Moroccan court sentenced the leader of Rif's Hirak protest group, Nazzer Zefzafi, to 20 years in prison and handed down jail terms to 52 other protesters.

"This case is a carbon copy of the type of cases we used to witness under King Hassan II," says Asmaa El Ouadie, one of his lawyers.

Rights groups have denounced the severity of the sentences, saying the number of political detainees surpasses those imprisoned during the reign of King Hassan II.

"There too hefty sentences were the norm," continues El Ouadie. "My two brothers for instance were both sentenced in 1979 and 1977 to 20 years in prison. They were just schoolboys at the time. We thought this kind of practice was over, but now we've gone back to the past."

In August King Mohammed VI pardoned more than 180 people linked to the “Hirak” protest movement on the occasion of Eid Al-Adha.

Zefzafi, accused of threatening the security of the state, is believed to have refused the royal pardon.

"They wanted to be pronounced as innocent, without having a criminal record," explains publisher and activist, Karima Nadir. "They didn't do what the public prosecutor said. Is the security so fragile that ten or 20 people are going to threaten it?"

In 2011 Moroccans took to the streets to call for a reduction in King Mohammed's autocratic powers and for a constitution. They got it, together with promises of free speech, human rights and an independent judiciary.

However, Morocco's Arab Spring is not yet over, reckons political historian Maati Monjib.

"What is happening today in Morocco, it's a second wave of the Arab Spring. It's social, even if those who organise the protests are politically motivated. They want more freedom, they want more justice, more democracy in Morocco," he told RFI.

As with Tunisia, the demonstrations in the Rif region were sparked by anger over economic hardship after fishmonger Mouhcine Fikri was crushed to death in a rubbish truck while attempting to recover swordfish that had been confiscated by local police.

More reform demanded
Those covering the protests however "are prosecuted or end up in prison", says Monjib, referring to the case of journalist Hamid El Mahdaoui, who was sentenced to three years in prison last year in June along with protest leader Nasser Zefzafi.

On Wednesday both men appeared before an appeal court to try to have their sentences overturned. Both their cases have been adjourned until next month.

While projects like the new high-speed rail line allow Morocco to step firmly into the future, Karima Nadir claims that this is merely a veneer. Rabat is "only cleaning the surface but not working deeply on the real problems", she concludes.

No government spokesman was available for comment to RFI at the time of publication.

Bagbin fly to Dubai for medical review after budget rejectio...
53 minutes ago