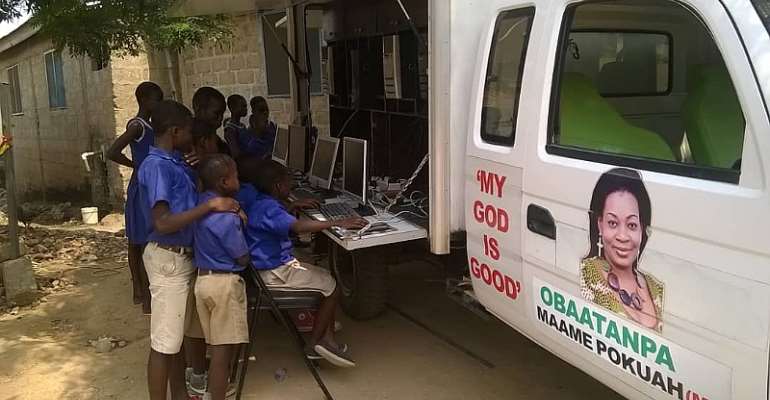 It is becoming increasingly worrisome to witness on daily basis attempt by the NPP government to destroy our education system at both the national and local levels.

The Kuffour administration left office without building even one secondary school.The Akuffo Addo government after poorly implementing the free SHS has introduced the trouble track system which is killing our secondary education.Upon all these atrocities,desperate attempt has been made by this government to destroy education at the local levels of which the current issue in Agona East can't be left out

The best and workaholic female MP *Hon Queenstar Pokuah Sawyer upon noticing the plight of students and ICT teachers in her constituency in some years ago provided a geographically and occupationally mobile Van which from time to time goes to schools to educate the students in the Agona East District.As a law maker,she made sure all standards were met. Consultation of all stakeholders which include the GES were made before the VAN started operating.How happy the teachers,students and the parents became since there was not even one computer in the schools in the whole district.The students had to learn the theological aspects of ICT without practising to know how it is.

Surprisingly, we woke up to hear the current education director who was allegedly transfered to the district on political basis Mad. Vida Amoah commanding all teachers in the district not to allow the ICT VAN provided by the MP to educate the students to enter the premises of any school.

Reason being that is an "order from above"

Is it an order from the deputy minister of education prof. Kwesi Yankah who hails from Agona East and has the intention to become the member of Parliament for the Agona East Constituency or from NAPO the educational destroyer?

Stopping a whole ICT VAN which u do not fuel,pay it operators eeeiih if not nation wrecking,abro),bayie,wickedness,immorality,dissipation,perversion,turpitude or roguery, this can't be compared to any other thing.

I was upset,shocked,perplexed in fact highly bewildered upon hearing this. Is it not education that we playing politics with? Hhmmm

I repeat, how on earth can our future leaders suffer because of political expediency?