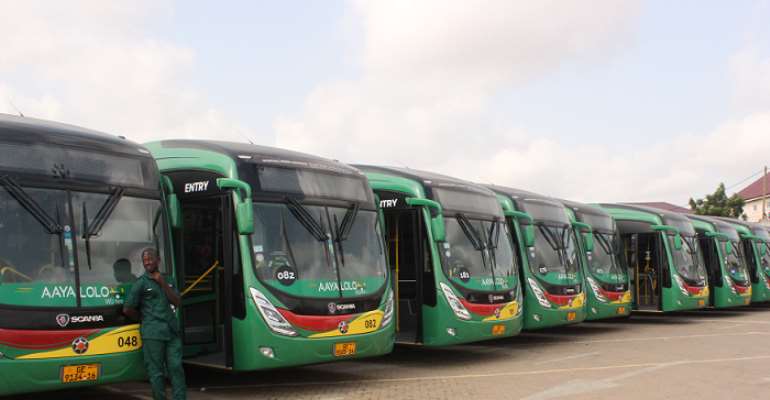 “Character consists of what you do on the third and fourth tries.”- James A. Michener

Operations of Bus Rapid Transport [BRT] which has become Quality Bus System [QBS], popularly known as Aayalolo is at the verge of collapse due to some challenges facing the company, particularly the lackluster approach to things by the current government.

This, a newly introduced World Bank project being manned by Greater Accra Passenger Transport Executive (GAPTE) and to be owned by public transport unions with an ultimate aim of decongesting the roads and improving public transport services by facing-out the current ‘trotro’ which is largely associated with issues of rickety vehicles, less-comfortability, bad driver/attendant appearance and attitude, long travel time etc,.

Now, talking about the challenges, unlike Metro Mass Transit [MMT] and other State transport services, Aayalolo does not enjoy subsidy on fuel bought for operations, thereby rendering its cost of operation extremely expensive.

Currently, 70% of the company’s earning goes into fuel purchase with the remaining 30% covering salaries and other expenses, meaning Aayalolo as a business is unable to break even, creating issues of salary arrears of many months and affecting motivation of workers.

The bus system which is expected to operate 3 main routes namely Tudu – Amasaman, Tudu – Kasoa, Tudu – Adenta, in Accra and to be deployed to the regions, currently operates the Tudu –Amasaman and Tudu – Kasoa corridors, notwithstanding some infrastructural challenges.

Patronage of the buses at the inception of service as at December 2016 was as high as 12,000 passengers per day but dwindled to 9,000 because the Aayalolo bus unlike the ‘trotro’ is un-able to cut corners in traffic and in effect prolonging travel time.

But based on the Lagos example, Aayalolo Management requested Government through Ministries of Transport, Roads and Highways and Urban Roads to grant it a dedicated lane on the Adenta – Tudu corridor and others to begin operations but that has fallen on death ears.

The World Bank as consultant for the project isn’t happy about the development; it says there is no need to reinvent the wheel because same project has been successfully implemented in other African countries including Nigeria, Tanzania, and Rwanda.

Either the neglect is deliberate or creative thinking to find both temporal and permanent solutions to the challenges seemed to have been lost on the current regime. Transport Minister, Hon Kweku Asiamah who oversees Aayalolo and GAPTE Chair, Hon Adjei Sowah are worse culprits, only blaming the past regime, forgetting the mandate granted them is to seek solutions.

If the Akufo Addo led government is committed to the success of Aayalolo, how come it has not in 2 years acted upon the most pressing issue of being offered subsidized fuel for operations?

With government’s unpreparedness to dedicate a lane on the existing Adenta –Tudu road, is it not possible to consider other worthy options even if in the interim? Particularly that Govt has the loan on the buses to service just as resources for operations and remuneration staring at it.

The suggested route is comparatively good, of less traffic and will help as a direct route since commuters population in and around Adenta, seeking to get to the CBD and back each day can’t be underestimated and capable of helping to generate revenue to meet the company’s needs.

What will however matter as condition precedent is an intense public awareness of road priority for Aayalolo buses, all in an effort to have car owners abandoning theirs for Aayalolo which is cheaper in terms of amount and travel time and in the process decongesting the road.

It is great to hear shuttle service is also being explored. Adverts about the service must be on the buses as well as on social media for easy contacts. Church groups, school associations, families, workers etc on a daily basis have programs to attend and would need vehicles of that kind.