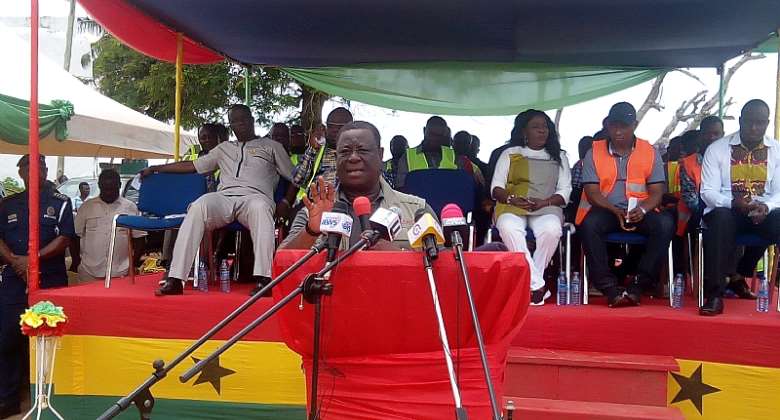 The Minister for Roads and Highways, Mr. Kwasi Amoako Atta has cut the sod to commence construction of the Axim town roads in the Nzema East Municipality of the Western Region.

The GHc12 million road infrastructure forms part of government's efforts to improve road networks in the country and also to make the various principal streets attractive.

It would be recalled that during this year's Kundum festival celebration by the Chiefs and people of Axim, President Akufo-Addo who was the special of guest of honour assured his commitment of asphalting the township roads of the area.

The 5.8km Axim Town roads will be constructed by Justmoh Construction Limited and supervised by the Department of Urban Roads.

Speaking at the sod-cutting ceremony as part of his tour to the Region on Tuesday, November 6, 2018 at Axim Victoria Park, the Roads Minister, Mr. Amoako Atta expressed his profound appreciation to the good people of Nzema East Municipality for overwhelming support given to the NPP government for this project to be seen the light of the day.

He also thanked the Member of Parliament of the area, Mrs. Catherine Afeku for supporting the government for this project and charged the people to rally behind her.

He revealed that President Akufo-Addo directed him construct the Axim township roads immediately the President returned from the Kundum festival in August 2018.

According to him, the project begins immediately and is expected to be completed in twelve (12) months.

He added that the NPP government is committed to the development of the people of Nzema East Municipality and therefore called on them to rally behind President Akufo-Addo and also pray hard for him.

He urged the people to embrace the project and support the contractor to complete the work on schedule.

He revealed that contractor is one of the best contractors in Ghana and therefore urged the people to cooperate with the contractor.

He also urged the contractor and the engineers to respect the people and listen to their observations.

The Roads Minister stated that government will not compromise on quality and value for money concerning the execution of all road projects in the country.

He also acknowledged the impact of heavy rains in Western Region on the execution of the road project.

He however assured the people that the Ministry will create a strategic plan to overcome this impediment.

He, therefore, assured the people that his ministry would be monitoring the construction on time.

According to him, 78,000km is the total road measurement and half of it is feeder road and we a lot to do as a country.

The Roads Minister who is also Member of Parliament for Atiwa Constituency used the occasion to promise the Municipality to construct the Nsien Senior High School (SHS) internal roads to make teaching and learning at the school very attractive.

On his part, the Western Regional Minister, Dr. Kwaku Afriyie appealed to the Roads Minister to construct the roads in the Region to make movement of goods and people very easy.

He said the roads in the Region are very bad and do not speak well for the area.

He added that Region is blessed with natural resources but the roads in the area are nothing to ride home about.

"Our major challenge is road network. Roads are better than Hospitals, if we construct in the Region, we do it for Ghana as a whole", he saddened.

The Member of Parliament for the area who doubles as the Minister for Tourism, Culture and Creative Arts, Mrs. Catherine Abelema Afeku thanked President Akufo-Addo for listening to their calls to construct the Axim township roads.

She revealed that since 1957 no government has developed the area than the NPP government and that the project when completed will face-lift the image of the late Paa Grant who was the founder of UGCC/UP traditions.

"This Axim township roads that you see here was first started by former President John Agyekum Kufuor in 2007 and unfortunately we lost power to the NDC and for good eight years they abandoned it and we thank God the NPP we come to power to complete it, let us all support President Akufo-Addo", she revealed.

Madam Afeku used the opportunity to reassured the good people of the Nzema East Municipality that, the Akufo-Addo led government is keen on infrastructure development which will lead to economic and social development as well.

She added "The projects we are currently undertaking in the Nzema East Municipality are just a tip of the iceberg, there are more projects intended to be started and completed soon within the Municipality. This is a sign that, the Akufo-Addo led administration is more of an action and vision driven one than some other administrations we have witnessed in the past".

She also entreated all Ghanaians to unite and continue to support His Excellency Nana Addo Dankwah Akufo-Addo for the great work he is doing for this lovely nation.

She, therefore, used the occasion to appeal to President Akufo-Addo to construct a Landing Beach for the Chiefs and people of Axim.

She called on the Roads Minister as part of his tour to the Region to seize the opportunity to inspect the bad nature of Simpa Junction to Gwira Aiyinasi-Wiawso road.

She seized the opportunity to appeal to the contractor to engage the local people in the labour work.

She promised to collaborate with the contractor to ensure speedy pace of the project.

The colourful ceremony brought the scores of people from the three Constituencies within the Nzemaland and other places to grace it and ended in a peaceful manner.

The Minister for Roads and Highways was accompanied by some staff of the Ministry, Western Regional Minister, Dr. Kwaku Afriyie, Member of Parliament for Tarkwa-Nsuaem Constituency, Hon. George Mireku Duker, NPP Western Regional Chairman, Mr. Francis Ndede Siah, the media among others.