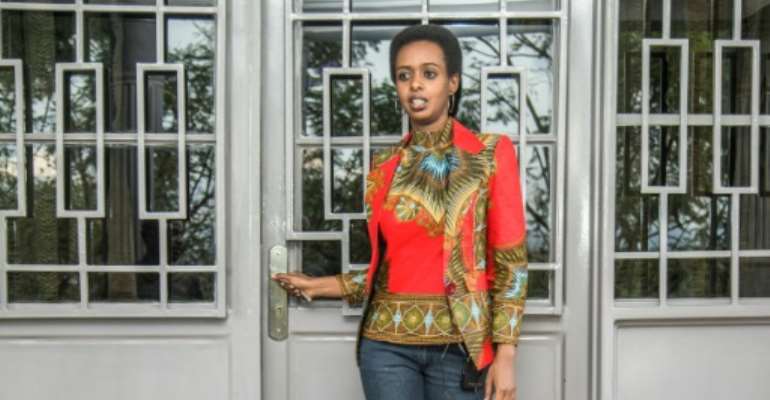 The 37-year-old Rwandan politician Diane Rwigara struck a defiant tone in an interview with AFP ahead of her trial for treason, insurrection and forgery. By Cyril NDEGEYA (AFP/File)

Rwanda is "like a prison" with Paul Kagame its imperious warden, according to Diane Rwigara, a young politician who sought to challenge for the presidency and whose trial for insurrection and forgery begins Wednesday.

The 37-year-old, who was released on bail in October, struck a defiant tone speaking to AFP ahead of proceedings.

"I just came out of a prison but my country still feels like a prison. And the prison guard is none other than the ruling party... dictating to us how to live, what to do and what to say," she said in an interview at her home in the capital Kigali.

"I was not surprised by my arrest. I was kind of expecting it because of what I was doing in the country: if you dare criticise the government that is what happens, you get arrested, imprisoned or lose your life. I expected some form of retaliation." 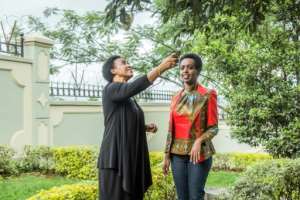 When Rwandan politician Diane Rwigara appears in the dock she will not be alone: her mother Adeline has also been charged, with insurrection and "divisionism". By Cyril NDEGEYA (AFP/File)

Victoire Ingabire, another woman who sought to run for the presidency in 2010, was blocked from competing, arrested, tried and spent six years in jail before her release in September.

Other political dissidents abroad have been assassinated, abducted or threatened. Rwigara believes her own father, Assinapol, who died in a 2015 car crash in Rwanda, may have been the victim of a political murder after he fell out with Kagame.

When Rwigara appears in the dock she will not be alone: her mother has also been charged, with insurrection and "divisionism", an idiosyncratic Rwandan crime levelled at those who question the dominant narrative of the 1994 genocide.

"The hard part for me was seeing my mother and sister in such a situation," she said.

Rwigara's brothers and sister have been interrogated, family assets have forcibly been auctioned to pay off a multi-million dollar tax claim, while a hotel they owned was demolished for allegedly failing to abide by city guidelines.

"My family had nothing to do with my political journey," she said, adding, "people are guilty by association, meaning that my family had to be punished for my actions." 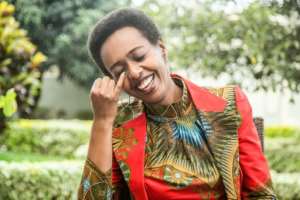 Diane Rwigara says she hopes to defend herself against what she says are trumped-up charges but adds, 'I hope I will not go back to prison but if I go back, I go back'. By Cyril NDEGEYA (AFP/File)

Their arrests in September last year followed the election commission's decision to bar Rwigara from running on the grounds that she had forged papers.

Prior to that an attempt had been made to smear the young female candidate by the online sharing of naked photographs purporting to be of her.

Kagame has been Rwanda's defacto leader since 1994 when his rebel forces invaded, stopped the genocide that killed at least 800,000 mostly ethnic Tutsis and seized power.

He became president in 2000, a post he might hold until 2034 thanks to a constitutional amendment waved through three years ago. He later won the presidential election from which Rwigara had been excluded with 99 percent of the vote.

Although the opposition Green Party won its first-ever parliamentary seats earlier this year, Kagame and his party dominate and Rwigara is one of the very few openly critical voices in the country.

Despite the threat of a maximum 15-year sentence, the sweeping up of her family into her case and her lack of a political constituency or even party, Rwigara still aims to become a lightning rod for opposition to Kagame.

"What is lacking in this country is accountability. The ruling party does what it does because there is no consequence for their actions," she said.

"I am not in this for fame. I have gone through a lot and I have to do what is necessary for our country. The only people going to bring about change in this country are us Rwandans. No one is going to do it for us," she said, echoing Kagame's own rhetoric of empowerment and independence.

Those sentiments are core to Kagame's legitimacy which he maintains by constant reminders that he saved Rwandans from the genocide and has built an economic success out of the ashes.

But Rwigara said that image -- beloved of Kagame's admirers -- is false.

"Some of the statistics on Rwanda's development appear to be cooked," she said, repeating allegations made by many regime critics.

"There is a high level of poverty and unemployment but you will not hear that," she said.

On Wednesday, Rwigara hopes to defend herself against what she says are trumped-up charges.

"I am innocent and the charges are fabricated because I opposed the ruling party," she insisted. "I hope I will not go back to prison but if I go back, I go back."