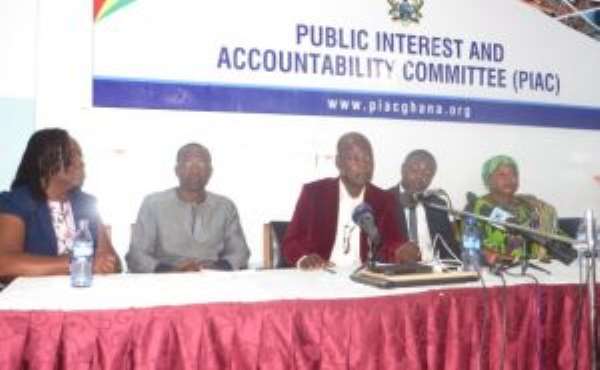 The Public Interest and Accountability Committee (PIAC), is unhappy over what it describes as wrongful payment of millions of dollars meant for the Petroleum Holding Fund (PHF) into accounts of the Ghana Revenue Authority.

According to PIAC, over US$43 million was wrongfully paid into GRA account instead of PHF in 2017.

PIAC said despite several assurances, the amounts are “yet to be transferred into the PHF as required by [Petroleum Revenue Management (PRMA) Act, 2011 (Act 815)] Act 815.”

“PIAC finds the recurrence of wrongful lodgment of petroleum funds into GRA accounts unacceptable. GRA must immediately transfer the accumulated funds into the PHF. The MoF [Ministry of Finance] must provide guidelines to forestall similar occurrences,” the report added.

According to PIAC, instead of releasing the monies wrongfully paid into its accounts as stated by law, the institutions kept them in their accounts.

Since its set up in 2011, PIAC has been monitoring and evaluating the management of Ghana's petroleum revenues by the government and institutions of the State.

Citi News' study of the latest report from PIAC indicates several recommendations have not been implemented.

PIAC in its 2017 report also complained that after six years of the coming into force of the Petroleum Revenue Management (PRMA) Act, 2011 (Act 815), the regulations that will help with the implementation of the law are yet to be passed leaving the utilization of Ghana's oil revenue in jeopardy.

PIAC recommends that the regulation should be drafted immediately for the approval of Parliament.

PIAC believes the further delay in the passage of the regulations could hamper the implementation of the PRMA.

“The Regulations have been developed but yet to be laid before Parliament. Further delay in the passage of the Regulations could hamper the smooth implementation of the PRMA. For example, it is not clear how communities impacted by petroleum activities can access compensation under Section 24 of the Act.”

Under the surface rental non-payment and arrears, PIAC noted that Oranto/Stone Energy has still not honored an outstanding surface rental invoice of $67,438.36 since February 2013 despite several calls.

PIAC in its report said GRA had said it could not locate Oranto/Stone Energy located in Angola and Mozambique.

PIAC recommends that GRA must “find and compel Oranto Energy to pay the outstanding invoice with the applicable penalties for the period during which it had been in default.”

GRA according to PIAC can collaborate with the relevant authorities in these jurisdictions to retrieve the money.

“PIAC is calling for an immediate meeting between the Government, GNPC, and GNGC to agree on a clear roadmap for the clearing of VRA's indebtedness to GNGC.”

PIAC also called for transparency in the management and disbursement of the Energy Sector Levy Act (ESLA) fund.

For instance, the Ministry of Finance should disclose how much of the seven and ten-year bonds have been utilized to clear the debts so far.

“The fifty million dollars (US$50M) advance by GNPC to the Ministry of Finance, which is not backed by a formal.”

On refund of the US$50 million, Special Advance PIAC urged the government to “endeavor to pay the US$50 million it took from GNPC in 2014, to help improve the capitalization of the national oil company.”