Sammens Urges Ghanaians To Watch Out For Citi TV 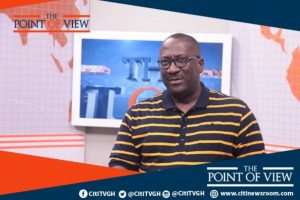 Managing Director of Citi FM and Citi TV, Samuel Attah-Mensah, has set the target of placing Citi TV among the top three television stations in Ghana.

Citi FM as at January 2018, was rated by GeoPoll as the best English speaking radio station in Ghana, and Mr. Atta-Mensah feels a similar status is in reach for Citi TV within one year.

Speaking on Citi TV's The Point of View as the station commemorates 14 years of Citi FM, Mr. Attah-Mensah said “0ur estimation is that in one year, we should be counted among the top three television stations. And that is what we are working at.”

“We should take complete dominance of the upper end of the demographics nationwide,” he added.

Going forward, the Citi TV MD is clear the avenues for success in TV will be different than what has been experienced in 14 years of radio.

The differences notwithstanding, there are still lessons to be learned from the experience of managing a radio station, Mr. Atta-Mensah said.