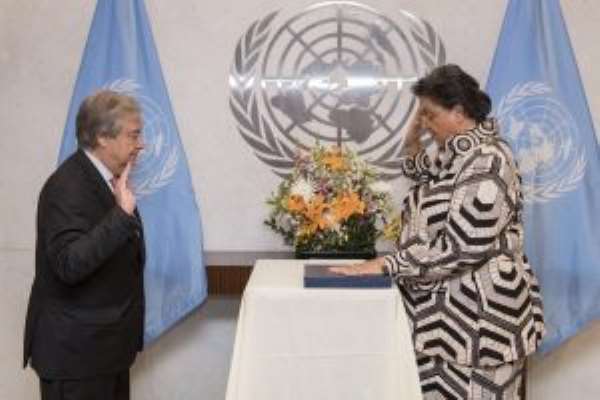 Ghana’s former Minister of Foreign Affairs under the John Mahama administration, Hannah Tetteh, has been sworn into office as the Director General of the United Nations Office, Nairobi in Kenya.

She was sworn in by United Nations Secretary-General António Guterres on Friday November 2, 2018.

In July 2018, Mr. Guteres announced the appointment of Hanna S. Tetteh as Director-General of the United Nations Office at Nairobi (UNON).

I am honoured
Hannah Tetteh in a tweeter post indicated that she was fulfilled to be formally inducted to the high office.

“It was my honour to be sworn in yesterday by the Secretary General @antonioguterres as the Director General of the United Nations Office, Nairobi, she tweeted.

Profile of Hannah Tetteh
Ms. Tetteh most recently served in the cabinet of the Government of Ghana as Minister for Foreign Affairs (January 2013-January 2017), and Minister for Trade and Industry (February 2009-January 2013).

While serving as Minister for Foreign Affairs, she was also a member of the National Security Council and the Armed Forces Council.

From 2014 to 2015 she was the Chairperson of the Council of Ministers of the Economic Community of West African States (ECOWAS).

Beginning in December 2000 to January 2005 she served for one term as the National Democratic Congress (NDC) Member of Parliament for the Awutu Senya Constituency.

She later returned to Parliament in January 2013 until January 2017 as the NDC Member of Parliament for the Awutu Senya West Constituency.

Ms. Tetteh is a practising Lawyer and holds a Bachelor of Laws (LLB) degree from the University of Ghana, Legon.

She also completed her professional law course at the Ghana School of Law and was called to the Ghana Bar in October 1992.

Prof Naana Jane stings NPP on Corruption: 'Not even family i...
15 minutes ago