From The Regions: Muslims celebrate festival 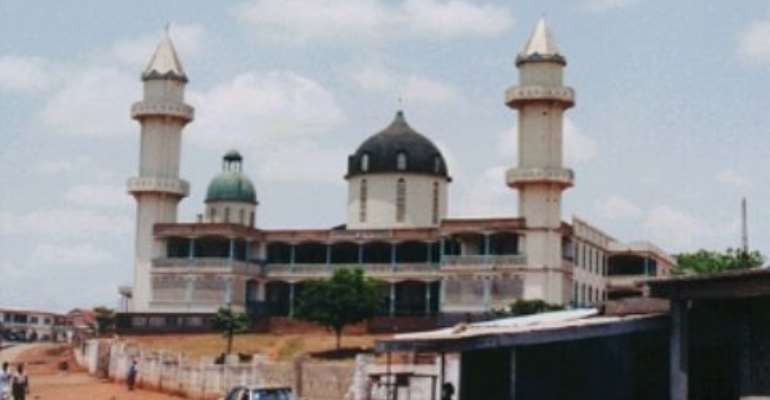 Sunyani (B/A), Nov. 3 GNA -The Brong-Ahafo Regional Chief Imam, Imoro Abdul-Kadr has appealed to Muslims in the region to continue to live in peace with their fellow Christians. Chief Imam Abdul-Kadr was addressing about 2000 Muslims who converged at the Sunyani Coronation Park on Thursday for prayers after a successful end of the Ramadan Fasting. "We Muslims in Ghana are grateful to Allah for giving us a peaceful country to practice our religion alongside our Christian brothers and sisters," he stressed. He urged Muslims in the region not to let the teaching and moral practices that guided them during the Ramadan fasting to not be a nine-day wonder but must be maintained in their day-to-day life and justify the Muslims slogan of "Peace Is Islam". Imam Abdul-Kadr said the theme for the Omanhene of Sunyani Traditional Area Silver Jubilee celebration, "Sanitation is key to sustainable development" should be in mind of all Muslims to keep their environment clean as much as they could, to help prevent malaria, if not total elimination.
He said Imams in the region would not cease praying for the President and his cabinet Ministers for Allah's blessing, guidance and protection to enable them to steer the affair of the nation successfully. Mr. Ignatius Baffour-Awuah, Deputy Brong-Ahafo Regional Minister and Mr. Kwame Twumasi, Municipal Chief Executive for Sunyani who represented Regional Coordinating Council (RCC) and the Municipal Assembly respectively commended Muslims and Christians in the region for a peaceful co-existence. All the 19 Zongo Community chiefs and sub-imams were present at the special prayer session. Ho Muslims mark Eid Ho, Nov 03, GNA - Alhaji Hamza Umar, the Volta Regional Chief Imam, said no true and faithful Muslim would kill in the name of the religion since Islam abhors murder.

He said this at prayers to mark 30 days of fasting by Muslim at the Ho Police Depot Park on Thursday.

"I don't regard any Muslim who kills for a cause as a Moslem. He is a killer," Alhaji Umar told the worshippers. He condemned the London bombings as repulsive and urged Muslims to co-exist peacefully with others.

Alhaji Umar advised Muslims to take education of their children serious and said the war now was on the education front where everybody is trying to give the best to his child.

Mr Kofi Dzamesi, the Volta Regional Minister, said intolerance arising out of indiscipline was a canker that must be fought if the country was to progress.

The Regional Minister presented five bags of rice, two bags of sugar and 2.5 million cedis on behalf of the Volta Regional Coordinating Council (VRCC) while Mr Mawutor Goh, Ho Municipal Chief Executive (MCE) presented 10 bags of corn and two bags each of sugar and rice to them to mark the day. Bolgatanga Bolgatanga, Nov. 3, GNA - Mr. Boniface Gambila, Upper East Regional Minister, on Thursday called on the various Muslims sects in the region to refrain from the use of inflammatory language during sermons, saying it was one major cause of religious conflict. "When you condemn the other man's way as a wrong one and portray yours as the best, you are most likely to stir up conflict," said the Regional Minister when he joined the Bolgatanga Muslim community in the Eid-ul-Fitir congregational prayer to mark the end of Ramadan. He noted that preaching could be done effectively with the use of decent, civil language, which was a more practical way to demonstrate the peace that Islam stood for.
Mr. Gambila called for tolerance and peaceful co-existence among Muslims, as well as between Muslims and other religious groups in the region.
He urged them to let spiritual upliftment gained from their 30 days of fasting and praying reflect in their lives and in their attitudes towards the nation.
The Regional Chief Imam, Alhaji Yussif Adam, said special prayers for the Head of State, Ministers and other members of Government. He asked for God's divine intervention in the affairs of Ghana. Imam Adam also pledged the cooperation of the Muslim community towards the promotion of peace and development in the region. In a solidarity message delivered on his behalf, the Most Reverend Lucas Abadamloora, Bishop of the Navrongo-Bolgatanga Catholic Diocese, conveyed the good wishes of the Region's Catholic community to the Muslims on the occasion of Eid-ul-Fitir.
Bishop Abadamloora expressed special thanks to the Regional Chief Imam for personally attending several Catholic functions, including the warm welcome he extended to Cardinal Peter Appiah Turkson when the latter visited the Region.
"It is our prayer that the cordial relations which exist between our communities will further expand during this coming year, and that with close co-operation with the civil authorities, we may together make the Upper East Region a better place to live in," the Bishop said. Eid Begoro Begoro, Nov. 3, GNA - The Fanteakwa District Chief Executive (DCE), Mr Ebenezer Ofoe Caesar, has called on Muslims to take opportunity of the fee-free basic education to send their children school. He also called on them to exhibit a high sense of discipline in their communities, as they had exhibited during the period of the Ramadan to give credence to Islam as a religion of peace.
Mr Caesar said this on Thursday, when he joined the Muslim community at prayers at Begoro to mark the Eid-ul-Fitr celebration. He said to ensure that nothing hindered the education of the Moslem child, the District Assembly had built schools in all the Zongo communities and asked them to pay more attention to their wards' education needs.
The DCE also spoke about the outbreak of cholera in some communities and asked them to keep their surroundings clean to avoid the epidemic.
He later presented 25 bags of rice and six cartons of cooking oil to the Muslim community on behalf of the Assembly. The District Chief Imam, Alhaji Alhassan, reminded Muslims that the purpose of the Ramadan was to help them reflect on their past life with a view to improving on it. Hohoe Muslims mark Eid Hohoe, Nov 03, GNA - Mr John-Peter Amewu, the Hohoe District Chief Executive, on Thursday praised the Hohoe Muslim community for embracing the National Health Insurance Scheme (NHIS) by being the most registered community in the district.
He was addressing the Ahlissuna Wall Jama-a and the Tejaneeya sects at separate functions at Hohoe to mark Eid-Ul-Fitr.
Mr Amewu appealed to the Muslim community to translate the same zeal towards other government policies and interventions targeted at improving the socio-economic well being of Ghanaians such as the capitation grant.
He said the capitation had replaced the PTA dues and sports levies among others and urged parents to seek clarification from school authorities on bills they need to pay to avoid being cheated. Alhaji Mutaiwakilu Yusif, the Regional Chief Imam of Ahlissuna Wall Jama-a, called for unity among Muslims and to shun negative attitudes that would drag the religion into disrepute.
Alhaji Tahiru, the Deputy Imam of Tejaneeya at Hohoe, said Ramadan was over but the good deeds enshrined in the exercise such charity and feeling for the destitute in the community must be practiced.